dr Jeannette Janzen had been working as a family doctor in Quebec for three decades before she moved to Victoria in January 2019.

The process of getting a BC license to continue practicing was harrowing in and of itself, and it took Dr. Janzen 11 months to obtain a BC license, when the exact same process took a month and a half to complete in Alberta. Other doctors have noted the same delay and complication in simply gaining permission to practice here.

But the worst part of the experience was yet to come.

dr Janzen decided to get the lay of the land in Victoria by working as a family doctor at walk-in clinics first. Eight months after starting that job—several months before the pandemic—she left clinical practice for telemedicine.

“I just saw so much neglect and poor medicine because [of] no time being spent with patients,” Dr. Janzen said. “The clinics, some of them I worked in, were so dilapidated, it was disgusting.”

Between January and October 2019, Dr. Janzen worked shifts across nine different walk-in clinics, several of which have shut down in the past year. Their closure is part of a domino effect of a shortage of family physicians in BC that has also culminated in emergency rooms having to shut down, particularly those in rural communities. As of July, nearly a million British Columbians don’t have a family doctor.

In response to the crisis, the provincial health ministry announced measures like short-term funding to keep five Greater Victoria walk-in clinics afloat until the end of the year, and, on one occasion, Island Health helped pay a clinic’s operating costs.

However the problems that Dr. Janzen and other family physicians have observed within the system largely involve inadequate funding, and began long before the pandemic. Some of these problems are now being addressed. 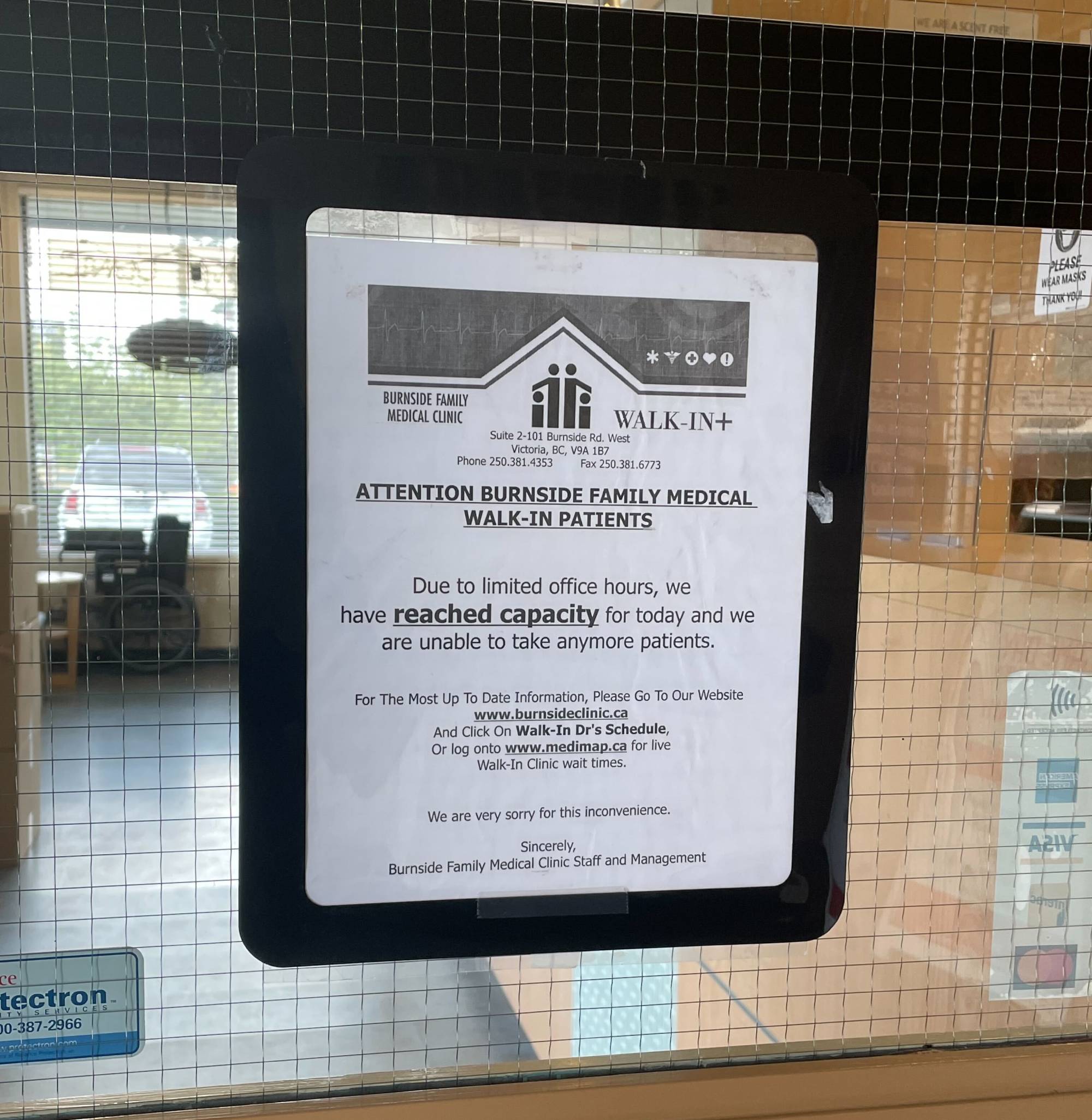 When visited just after 1pm on Aug. 10, the Burnside Family Medical Walk-In Clinic was at capacity and not accepting more patients. Photo: Brishti Basu / Capital Daily

In an email to their members on Aug. 8, Dr. Ramneek Dosanjh, president of the advocacy group Doctors of BC, said that more stabilization funding is on its way, and the group will “have a plan to announce in the near future.”

The letter outlines a proposed option for doctors to move to a new payment model that combines fee-for-service and contract models. This is a proposal based on consultation with Doctors of BC members.

According to the letter, the association has been meeting with government representatives twice a week, are “pleased overall” with the province’s response during these discussions, and hopes to launch the new model this fall.

These discussions are happening alongside negotiations for a new Physician Master Agreement—the contract between doctors and the health ministry that establishes their compensation, benefits, and protections—that began in June 2021.

Neither Doctors of BC nor the provincial health ministry have answered Capital Daily’s questions about their negotiations. There is also no data collected on how many family doctors have retired or left their practice in BC over the past two years.

A new payment structure could be key to solving many of the issues that led to the current state of walk-in clinics in Victoria.

Holes in the system

Without specifying which exact clinics had which issues, Dr. Janzen detailed some of the problems she and other doctors regularly dealt with at walk-in clinics.

“The lights are so dark, I can’t see the rash on the patient,” she said. “When you go to cut open [an] abscess, it just stinks, and there’s no proper aeration [so] the people in the waiting room get to smell it too.”

Some clinics have no desk space within a doctor’s chamber for them to put their laptop, so they have to use it on the patient’s bed. Others have decades-old equipment. “I worked in a clinic where I took an otoscope [a tool for looking inside ears] off the wall and it cracked in half,” Dr. Janzen said.

At the Uptown Medical Clinic, located inside Walmart, Dr. Janzen recalled being “driven crazy” by the constant announcements from the grocery store that impeded her ability to listen to patients’ hearts.

None of the clinics she worked at had any nurses to support physicians—in contrast to her experience in Quebec, where at least three nurses were available to screen patients before the doctors saw them—meaning extra work for doctors. 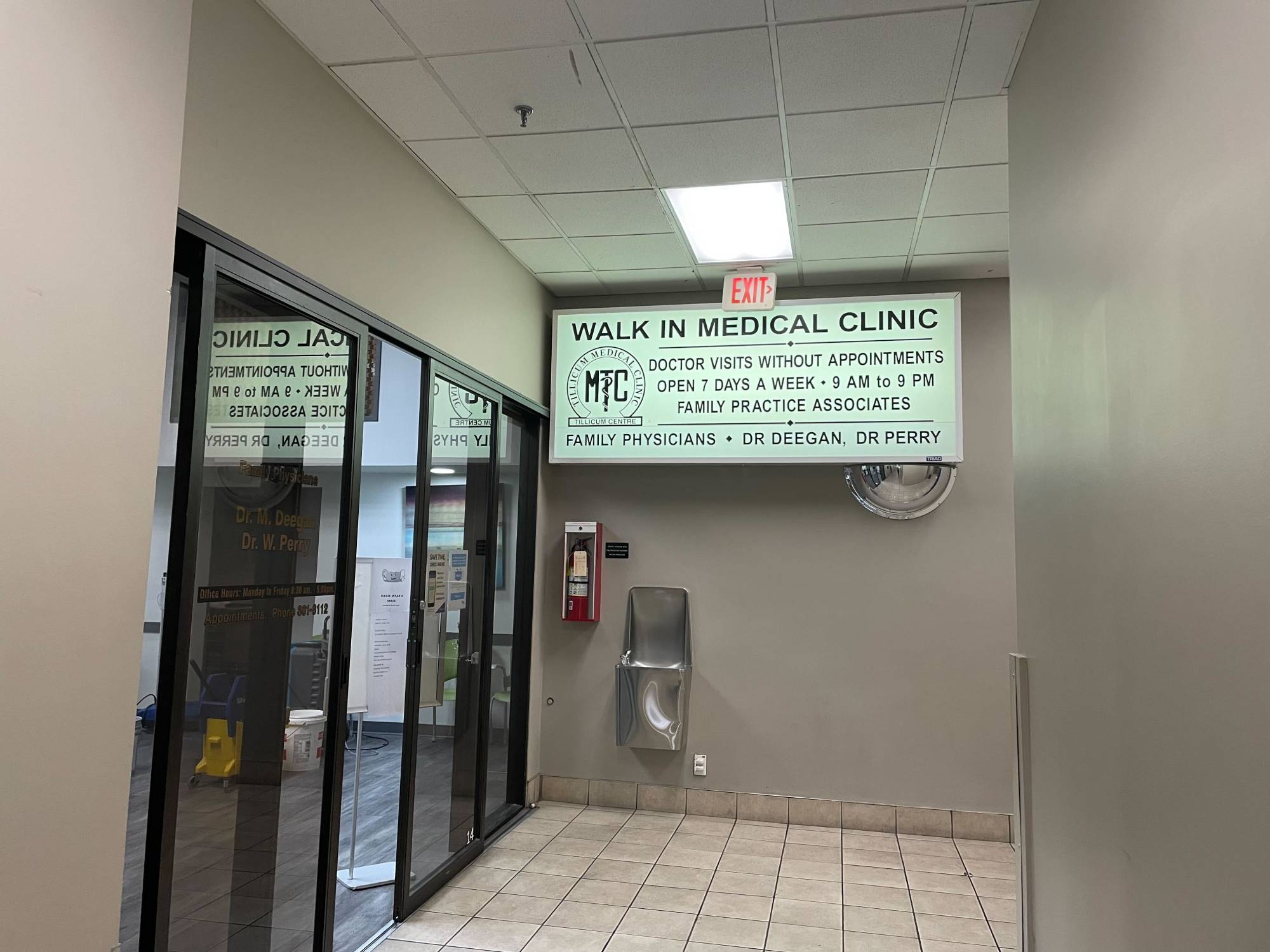 In Montreal, “I never saw a patient that hadn’t already been screened by the nurse,” Dr. Janzen said. Nurses there were able to separate patients who may be contagious, or prepare a clean surgical room for a patient who needs an abscess drained. There were no nurses present at any of the clinics Dr. Janzen worked at in 2019.

“I cannot be the doctor, the nurse, the administration, the social worker, the psychologist, the kinesiologist, [and] the dietitian,” she said. “I want to be the doctor. That’s what I trained for.”

Much like the situation inside hospitals, a lack of adequate staff also meant cutting corners for patient care. “The gynecologist shouldn’t be writing the psych meds for a non gynecological problem,” she said, as an example. “There’s so many holes in the systems, it’s very sad.”

The condition of these clinics are a symptom of what the doctors have identified as a bigger problem, one that has been exacerbated by the pandemic: a lack of government funding to support them in time, and a fee-for-service model that does not adequately compensate physicians who have had to shoulder rising costs while managing their clinics.

“I can tell you stories of talking with the doctors who were running the clinics and they’re struggling,” Dr. Janzen said. “But there has to be government support and the fee schedule has to change.”

Doctors currently receive a flat $31 fee per patient visit. Overhead costs, like space, equipment, and staffing, come out of that fee, which doesn’t change based on the length of the visit or the number or complexity of problems the patient presents with.

Government support to help pay the business costs of running a clinic, and improvements to the current payment model were the top two asks from primary care physicians who participated in a Doctors of BC survey in June.

The findings showed that some family doctors like the fee-for-service (referred to as “FFS”) model— “they value business autonomy and do not want to enter into contracts with health authorities”—but want more money. Others are in favor of a new compensation model that addresses rising business costs and also takes into account the complexities of providing primary care.

dr Janzen said the $31 fee per visit means physicians cannot spend as much time with patients as is truly needed, in order to make a living and also pay 40% overhead costs.

According to the Aug. 8 update from Dr. Dosanjh, the new payment model they have proposed to the health ministry involves combining “the best of FFS and contract models.” There are no concrete details outlined in the letter, but it shares some key aspects of the model that are being considered in the discussions.

The payment model, they argue, should not require clinics to sign a contract with health authorities; needs to address rising business costs and complex longitudinal care; should simplify billing in order to reduce the administrative burden on physicians; and needs to account for time spent doing clinical work, like reviewing labs.

The letter also says both parties have agreed that family doctors must be compensated equally with hospitalists and doctors working in the new Urgent and Primary Care Centres.

“Our goal is that this new model will be attractive to a broad range of doctors, including those who bill FFS,” Dr. Dosanjh wrote.

This past spring, the province allocated $3.46 million to keep five Greater Victoria walk-in clinics open after a spate of closures in the region. This funding allowed the clinics to hire a total of about five family doctors and six registered nurses, but is set to expire at the end of the year.

dr Dosanjh’s letter also shared a minor update on that front, indicating there will be an announcement of more funding for clinics in the near future.

“We are very aware that the soaring cost of living means it’s nearly impossible to maintain a doctor’s practice, no matter where in the province you are located,” she wrote.

‘Why do we have to reinvent the wheel?’

dr Janzen switched over to telemedicine in October 2019, after she had been working longer hours for less pay in BC than ever before in her career. “I realized with time that this is not going to change in my career lifetime,” she said.

But Dr. Janzen did witness a major healthcare overhaul while working in Quebec.

According to her, the structure in Quebec used to be just as flawed as BC until neurosurgeon Philippe Couillard was elected premier in 2014. With health minister Gaétan Barrette, Couillard implemented a healthcare reform bill that eliminated thousands of jobs within the bureaucracy of regional health agencies . The bill was highly controversial at the time, ostensibly aimed at eliminating the province’s budget deficit.

“In retrospect, he acted pretty much like a dictator—and that’s what was needed to overhaul the system,” Dr. Janzen said.

This process saved Quebec $220 million a year by eliminating a layer of bureaucracy, and instead gave funding to family doctor groups who signed a contract with the government to help cover overhead costs.

“If you were a single doctor working in your office, you were not forced to join a Family Medicine Group, but it was appealing enough that most wanted to be part of a family medicine group, because they would get certain advantages,” Dr. Janzen said.

As part of the agreement with the government, Dr. Janzen and her colleagues were required to make sure all of their patients had access to care every day of the week, so they each took on some holiday shifts at a walk-in clinic down the hall from theirs. “It worked out very well, actually,” Dr. Janzen said.

For Dr Janzen, some of the solutions to BC’s healthcare crisis are already in motion and working well in other parts of the same country, like Quebec and Alberta.

“Everybody always talks about the system in the States. Quit looking at the States. Why don’t you look to other systems that are functioning?” she said. “Why do we have to reinvent the wheel? It’s not that complicated.”