As Victoria heads into the election marketing campaign’s last stretch, leaders’ debate reveals it is nonetheless Labor’s to lose

The Liberals have got what they wanted. This election is well and truly a referendum on Prime Minister Daniel Andrews.

But is it enough for Matthew Guy to scale “Everest” and win the 18 extra seats he needs to become premier?

On Tuesday night, the two men went head-to-head in the only debate of the campaign – disappointingly the parties only agreed to it on pay TV.

It was a different Matthew Guy from four years ago, where he became angry. This election, the opposition leader worked to not get agitated, and remained calm.

The premier was the same leader Victorians have seen for eight years, and he looked more of a leader than his opponent (that usually comes with incumbency).

Both sides got what they wanted out of the debate: Andrews pitched himself as the statesman looking to the future and the big picture, while the opposition was comfortable with the premier looking, in his words, arrogant.

Andrews tried his best to be positive, and he criticized the Coalition for having a narrow focus on health and not a bigger picture.

“You have to do both,” Andrews said when challenged about a choice between health and public transport.

The re-branded Matt Guy spelled out that being in government meant making “hard choices”.

“You can’t have everything and be wary of politicians who tell you you can,” he said.

Throughout the debate, the opposition wanted to remind voters of the past. Guy played a straight bat, and he rarely offered a shot.

Much like the campaign, the opposition strategy was to highlight the premier’s performance – it got what it wanted when Andrews talked about and argued with Guy about fracking.

“I’m not here to have a fight, I’m here to answer questions,” Guy said as Andrews talked over him.

As much as the Coalition wants to look back, lockdown and COVID were only offered up by one of the 100 undecided voters in the context of CBD recovery.

The focus of voters was varied including climate change, the caliber of candidates, preference deals, state debt, the budget, integrity and plans for the regions.

Despite the questions, the answers, like much of this campaign, lacked detail.

A survey of the undecided voters at the forum awarded the win to Andrews, with 38 per cent backing him after the debate compared to 34 per cent choosing the opposition.

And just like the rest of the electorate, there was a large group undecided on the pair.

It points to Saturday night’s result being drawn out.

Published and private polling shows that the major parties are neck-and-neck for the primary vote.

A Resolve poll in The Age found the majors on 36 per cent each – a low tally for both, and a sign of growing dissatisfaction with the Coalition and Labor.

The Australian’s Newspoll found the parties level on 37 per cent, two weeks ago.

A calculation of two-party preferred vote still gives Labor a victory, but both sides of politics are predicting wild swings and patchy results across the state.

A uniform swing is highly unlikely.

As polling day inches closer, some in Labor have become nervous, with the biggest fear being a minority government.

A primary of 36 per cent makes a Coalition majority government very difficult — historically the primary needs to be in the 40s to be a chance.

Labor can form a majority with a lower primary vote because of the large vote on the left flank with the greens, usually providing enough preferences to get them over the line.

Coalition relying on anger towards Andrews

Up until a few months ago, Labor looked set to cruise into a third term. It’s still the favorite with the bookies amid increased animosity towards the premier.

Dispatches from Labor people on the frontline — particularly in safe seat pre-polls — detail direct anger with Andrews, and not Labor, over lockdowns, corruption claims and the premier’s general style.

The election remains Labor’s to lose, but the Coalition have kicked some last quarter goals and its hoping the wind can bring it home just as it did in 2010 when Ted Baillieu hit the front right on the final siren.

As this column outlined last month, the Liberals believe their best hope is voter backlash against the premier.

It hoped that once voters started engaging with state politics (all parties report great voter apathy, especially in the wake of the federal election), it would be a problem for Andrews.

Several political experts have suggested that if the campaign had another four weeks to run, not four days, the ALP could lose office altogether.

Last week, out on the hustings, the mood among Liberals was upbeat, confident and at times cocky.

It has dulled in recent days, with the Coalition campaign beset by candidate controversy.

One upper house MP, Renee Heath, said she won’t be welcome in the party room because of her links to gay conversion therapy and the controversial City Builders Church. The Liberals are hoping anti-Andrews sentiment could sway voters away from Labor.(Sky News)

There’s also questions about perceived links to conspiracy theorists and anti-vaxxers through preference flows which the Coalition have not been able to shake.

The party’s candidate for the premier’s seat of Mulgrave, Michael Piastrino, echoed the right-wing Freedom Party’s call for the state election to be postponed because of concerns that the election was invalid due to the use of group voting tickets.

Piastrino had previously apologised, for telling voters that he thought Andrews should be jailed for “the murder” of 800 people.

Greens and independents could play a decisive role

The big winner from the major party malaise is the Greens, who are well positioned to increase their presence and perhaps finally deliver on its regular claim to holding the balance of power.

Suburban, rural and teal independents are also poised to mount serious challenges to the status quo.

For those who did watch the debate, the leaders’ performances may help the case for third parties and independents. 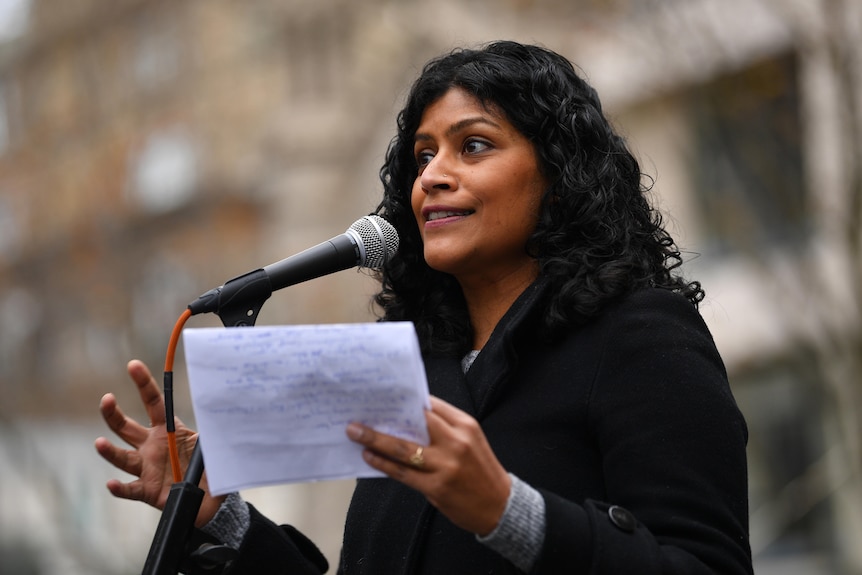 The Victorian Greens, led by Samantha Ratnam, are looking to poll well on Saturday.(AAP: James Ross)

Some liberals are looking to a black day in its history for hope.

In 1999, Jeff Kennett was cruising to another victory. The polls showed him ahead and, like Andrews, he was a divisive figure — loved and loathed in equal parts.

His hubris helped cost him the election – something Labor insiders have warned could be a problem for Andrews for over a year.

There’s so many parallels, even the number of seats the opposition needs to claw back is similar (the only thing missing is a footy final for Essendon to choke in).

Many Liberals see this as wishful thinking and concede the challenge is large, especially when it faces its own threats from teal and country independents.

Saturday night’s election count – live on ABC from 6pm – will be fascinating to see if the fragmentation of the electorate seen at May’s federal poll continues.

Preference flows from the Greens, minors and independents will be very important, which is why the Coalition has frequently bellowed: “Put Labor last”.

During the debate, undecided voter Martin asked about his 18-year-old son, who was going to vote for the first time.

“He’s not very convinced by any politicians at the moment and can’t find a way to be convinced,” he said.

He then asked about integrity allegations.

Beyond the talking points, he didn’t get much of an answer, making Martin’s son’s choice just as difficult.

Did Victoria Cheat on Johnny With Greg? ‘Bachelor in Paradise’ 2022 Spoilers