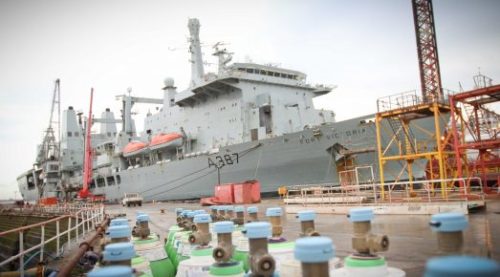 The year-long program of work, represented phase two of RFA Fort Victoria’s life extension program to keep her in service until 2025.

Dubbed ‘Britain’s number one pirate catcher’ after playing a key role in numerous counter-piracy operations off the coast of Somalia, the ship has rejoined the UK’s surface fleet, ready to support task group operations alongside aircraft carrier HMS Queen Elizabeth.

The latest upkeep work followed the first refit phase carried out by Cammell Laird in 2014. It was completed under the Through-Life Support contract held by the Birkenhead shipyard since 2008. Key projects included adapting the vessel’s cargo tanks to comply with environmental regulations, and adding the capability to re-supply Britain’s new aircraft carriers with provisions while at sea.

Cammell Laird project director Spencer Atkinson led both the upkeep projects for the Merseyside shipyard, the two biggest refits the RFA has ever undertaken. He said the work represented ‘a monumental achievement’ considering the timescale involved.

‘The Younger and the Restles’ Spoilers Thursday, January 6: Devon Will not Again Down- Ashland Doubts Victoria’s Motives; Billy Will get the Higher Hand