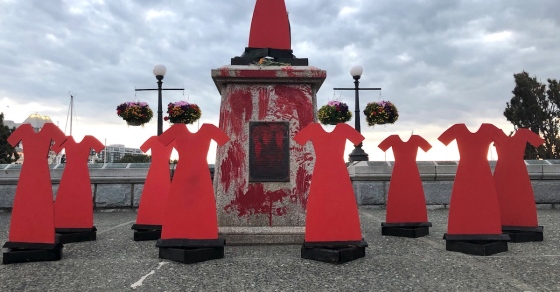 A statue of Captain James Cook was towed from Victoria’s Inner Harbor on Friday, the day after it was demolished and thrown into the water.

At around 8 p.m. Thursday, a crowd of about 200 moved on the lawns of the British Legislature towards the statue of Queen Victoria. Distracted by the police, the crowd headed for the Cook statue on the upper embankment across from the Fairmont Empress Hotel. A rope was tied around the statue’s neck and pulled down and thrown into the water.

The police saw the statue come down.

No arrests were made.

On Friday, tarpaulins were tied around the base and the wooden cladding was removed.

The Greater Victoria Harbor Authority, who owns the statue, had it pulled out of the harbor.

CEO Ian Robertson said: “We do not condone vandalism of any public or private property and we will assist the Victoria Police Department in investigating this incident.”

He said the GVHA was in solidarity with the Esquimalt Nation and the Songhees Nation – both members of the Port Authority – and had worked to support the “economic and cultural endeavors” of the First Nations on their properties.

The statue should be discussed at an upcoming meeting of the GVHA’s First Nations Economic Development Committee. Robertson said the future of the space “will be decided between our organization and the Esquimalt Nation and the Songhees Nation, and we will share plans for it when the discussion is over.”

Police said they were looking at a report on a missing nine-year-old child when the incident happened Thursday and are focusing their efforts on closing the streets to traffic, ensuring the safety of the public and officials, and providing evidence to collect for the property damage that has occurred.

“Safe, peaceful and lawful protests are allowed under the Canadian Charter of Rights and Freedoms,” said police media officer Bowen Osoko. “Property damage is not.”

Const. Cam MacIntyre said an earlier gathering of thousands of people wearing orange Every Child Matters T-shirts was “a moving, profound and thought-provoking” event and there was no indication of a loud one later Crowd would gather around the Cook statue.

Sasha Perron, 27, who ran 215 kilometers in June in honor of boarding school children and who organized the earlier event, said he was not affiliated with the group that removed the statue and that kind of activism was not his style.

Perron said the form of activism he wants to model and pass on is learning his language, culture, traditions and stories. “That is activism in itself, because that is exactly what the government wanted to take away,” said Perron.

Perron said his carefully planned family event is about community building and inspiring people. He expressed the hope that people wearing an Every Child Matters T-shirt in memory of the boarding school students would behave in ways that reflect the holiness of this message.

In the past few weeks, hundreds of graves of children forced into dormitories have been found through the use of ground penetrating radars on or near three former dormitories in Kamloops, Cranbrook and east of Regina.

Statues in Manitoba, Ontario and Newfoundland were also targeted on Thursday.

In Winnipeg, statues of Queen Elizabeth and Queen Victoria were tied with ropes and overturned during a rally over the deaths of indigenous children in boarding schools. Red paint has been poured over a statue of Queen Victoria in Kitchener, Ontario. In St. John’s, a statue in honor of the police was marked in red paint.

Paul Bramadat, a University of Victoria professor who is working with others on a book on indigenous public spirituality, said he did not necessarily approve of the destruction of the Cook statue, but added that one should not be surprised to see such statues would be taken down.

“Given the terrible discoveries over the past month and the long history of trauma that we understand better and better, many of my colleagues and I are surprised that these statues stayed where they are for so long,” said Bramadat.

Several suspects were searching for the Captain Cook statue, which was damaged last night. Here are 2 of them. Safe, peaceful and lawful protest is enshrined in the Charter of Rights and Freedoms. Property damage is not. Do you recognize them? Call (250) 995-7654 extension 1. | #yyj https://t.co/TCwrM6QYDU pic.twitter.com/WLtqJNOf5b