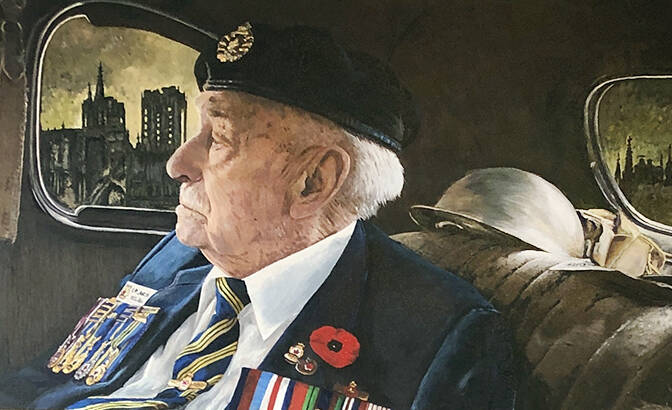 Artist Linda (Gord) Gordon at the Sooke Arts Gallery with the painting by Jack Cockrell. Cockrell served as a lieutenant in the Royal Canadian Armored Corps during World War II. He died in 2008. (Contributed – Linda (Gord) Gordon)

A token of remembrance: commemorating veterans through art

As the day of remembrance approaches, the phrase “so that we can forget” takes on a special meaning.

Not many World War II veterans have stayed, but the legacy of Legion member Jack Cockrell, who died in 2008, is remembered with Sooke artist Linda (Gord) Gordon’s painting Remembrance.

The image was inspired by a photo taken when members of the Sooke Royal Canadian Legion were lined up in the VE Day parade in 2008.

Cockrell served as a lieutenant in the Royal Canadian Armored Corps during World War II. He was a member of the Legion for 46 years and worked with a committee to build the Wall of Remembrance at the Save On Food Memorial Arena in Victoria before he died.

In honor of his commitment, a shelter for homeless veterans, Cockrell House at 2302 Sooke Rd., Was named after him.

The Remembrance painting is on display at the Sooke Arts Council Gallery on Church Road in Sooke through November 21st.

ALSO READ: The Legion hopes a sense of normalcy will return in this year’s poppy campaign