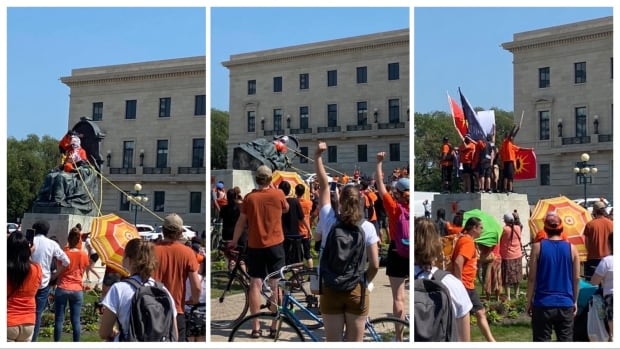 Members of a crowd protesting Canada’s handling of the aftermath of the school system have torn down a statue of Queen Victoria in front of the Manitoba Legislative Building.

The site was the destination of an Every Child Matters walk on Thursday. The statue was covered with handprints painted red. A sign reading “We were kids once. Bring them home,” leaned on the base of the statue.

Dozens of people, many of whom wore orange shirts to commemorate indigenous children sent to boarding schools, surrounded the memorial as ropes were wrapped around it and peeled from its base.

A smaller statue of Queen Elizabeth II was also toppled on the east side of the site.

Our people dismantled the statue of Queen Elizabeth here in Winnipeg💯 pic.twitter.com/Ppsxg4sfeW