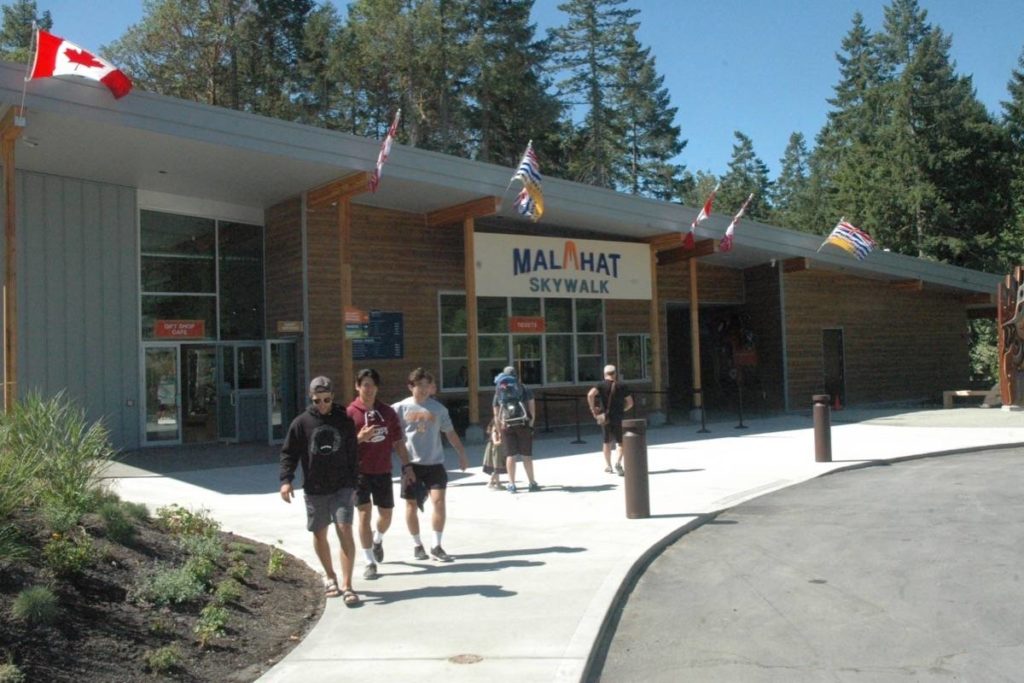 View of the Welcome Center & Gathering Place of the Malahat Skywalk with ticket sales, a café and a souvenir shop. (Robert Barron / Citizen)

The Malahat Skywalk, which includes this 40-meter-high spiral tower that offers great views of the area from above, opened on July 15th. (Robert Barron / Citizen)

Ken Bailey (left), general manager of the Malahat Skywalk, and George Harry, chief of the Malahat Nation, cut the ribbon at the facility’s opening on July 15. (Robert Barron / Citizen)

Views from the top of the spiral tower at Malahat Skywalk include Saanich Inlet, Finlayson Arm, the Gulf Islands and distant coastal mountains. (Robert Barron / Citizen)

Views from the top of the spiral tower on Malahat Skywalk include Saanich Inlet, Finlayson Arm, the Gulf Islands and distant coastal mountains. (Robert Barron / Citizen)

For Cole Evans and Lyly Osbourne, visiting the new Malahat SkyWalk on the opening day on July 15th was a highlight of their vacation.

The Mission-based vacationing couple said they read about the SkyWalk, which is north of Malahat Summit, and wanted to try it on their way home after spending most of their time visiting tourist spots in the Cowichan Valley visit .

“It’s really cool and the view is amazing,” said Evans from the lookout point on top of a 40-meter spiral tower that offers visitors great views of Saanich Inlet, Finlayson Arm, the Gulf Islands and the distant coastal mountains.

“It was definitely worth coming here and checking it out.”

The approximately $ 15 million Malahat SkyWalk project, a partnership between the Malahat Nation and A.Spire by Nature, a company run by two founding partners of the successful Sea to Sky Gondola near Squamish, combines nature tourism with Cultural tourism experience.

It was opened with a small ceremony and the cutting of the ribbon on the morning of Thursday, July 15th, after about a year and a half of construction.

Guests begin their tour of the grounds on the TreeWalk, a 600-meter-long elevated walkway that rises 20 meters above the forest floor to explore the treetops of the strawberry and Douglas fir forests.

Rest areas along the route provide information about the surrounding nature and indigenous art of the Coast Salish First Nations can also be seen.

The TreeWalk leads to the majestic wooden spiral tower with a slowly ascending spiral ramp that gently climbs 40 meters to the top of the 10-story, architecturally inspiring observation tower, the first of its kind in BC to offer the formidable views from 250 meters above sea level.

Daring guests can also stroll upstairs on an 84 square meter adventure net, which is partially suspended over the center of the spiral tower and offers another breathtaking perspective of the spiral structure below.

On the way back, guests older than five have the opportunity to return to the base of the tower on a 20-meter-long closed spiral slide.

Ken Bailey, general manager of the Malahat SkyWalk, said there would be a grand opening when the facility opened its doors to the public, but management was reluctant to make bigger plans for it due to the uncertainty surrounding the COVID-19 pandemic and decided to keep the ceremony small.

However, he said a bigger celebration is planned later this summer when health officials say it is safe.

“The excitement among the guests on our first day is certainly great because so many people wanted to see what we are building,” said Bailey of the facility’s Welcome Center & Gathering Place, which has ticket sales, a café and a gift shop.

“There are still not many tourists out of town due to travel restrictions, but it was our original intention to open the facility primarily to the local community and we are happy to be here and be part of the community. We intend to be open 365 days, 12 months a year and hold themed events for Christmas and other special days. “

Bailey said it was a long way to go before opening day.

“We started this project in January 2020 and have had to deal with the pandemic, heat wave and economic downturn ever since, but we made it through and here we are.”

Jason Singham from Victoria said he was “surprised” by the TreeWalk and the spiral tower.

“I read about it and wanted to see it,” he said.

“I’ll definitely be back and I’ll bring more people next time.”