Victoria Barton’s (Isabel Hodgins) life is on the line in Emmerdale this week, as she finds herself plunged into the unforgiving waters amid the survival challenge.

The long-serving character is one of several of the soap’s residents taking part in said survival challenge, which is all part of ITV’s Super Soap Week.

She was initially dead set against partaking, but Ellis Chapman (Aaron Anthony) convinced her to do it, which resulted in David Metcalfe (Matthew Wolfenden) signing up also.

Meena Jutla (Paige Sandhu), meanwhile, is hellbent on killing Victoria, after she overheard David confessing his love for her last week.

Monday’s (October 18) edition of the serial drama saw Victoria’s life in danger, after Meena damaged her harness in the hopes of making her fall from a deadly height amid the activities.

Victoria, however, pulled out of the challenge, much to Meena’s dismay.

But the stalwart’s life was on the line once more, when the rickety bridge collapsed, sending Manpreet Sharma (Rebecca Sarker) and Charles Anderson (Kevin Mathurin) into the water below.

Victoria was left clinging on for dear life, as was David, but the question is: will she die?

Does Victoria die in Emmerdale? 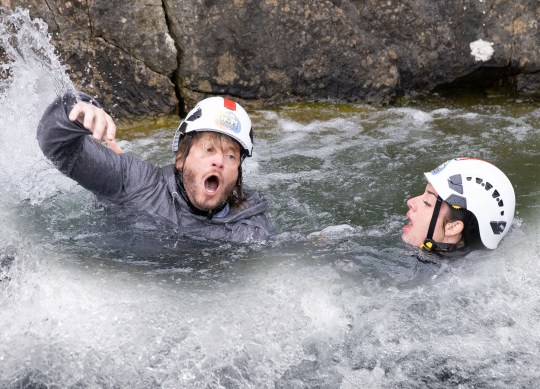 David and Victoria end up in the water (Picture: ITV)

It’s currently unknown as to whether or not Victoria dies in Emmerdale.

Tuesday’s (October 1) offering of the ITV soap will see both she and David desperately holding on to the remains of the bridge with all of their might, but a shocking turn of events sees them join Manpreet and Charles in the water below.

Victoria will be left fighting for her life, as she and David battle to stay alive in the treacherous water.

What’s more, this won’t be the only terrifying plunge that Victoria will take during the episode in question!

Her fate, however, remain unknown.

There is currently nothing to indicate that Isabel Hodgins is leaving Emmerdale.

Having said that, it’s unlikely that Emmerdale would release such information ahead of the stunt week, as the soap would want viewers to enjoy the experience without knowing the outcome of which characters live or die.

Isabel started playing Victoria in 2006, taking over the role from previous actress Hannah Midgely, who had portrayed the character for nine years.

If you’ve got a soap or TV story, video or pictures get in touch by emailing us [email protected] – we’d love to hear from you.

Join the community by leaving a comment below and stay updated on all things soaps on our homepage.

From free meals to veterinary care, these Victoria organizations are serving to pets in want