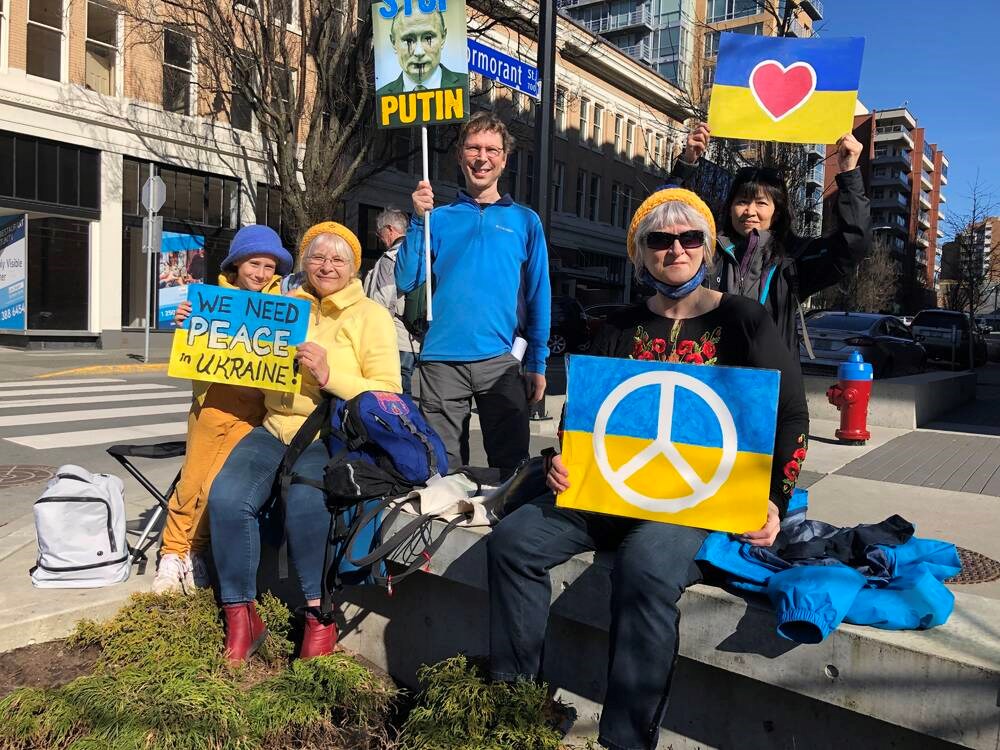 Supporters could be picked out by their homemade and store-bought flags, decorated bikes and vehicles and signs calling for peace. Many wore blue and yellow, the colors of the Ukrainian flag.

Opponents of Russia’s war in Ukraine lined Douglas Street on Sunday, waving yellow and blue flags and signs to denounce the ongoing attack and show support for its people.

The demonstration started at the Ukrainian Cultural Center at Douglas Street and Cloverdale Avenue in Saanich and stretched to the Dallas Road waterfront.

Supporters carried homemade and store-bought flags, decorated bikes and vehicles and signs calling for peace. Many wore blue and yellow, the colors of the Ukrainian flag.

All along Douglas Street, drivers honked their vehicle horns in support — risking running afoul of a Victoria bylaw that allows officers to issue tickets for unnecessary honking.

Devon Sereda Goldie, president of the Ukrainian Cultural Center and part of a Ukrainian-Canadian family, called the support on Sunday “incredible.”

More than 1,000 people turned out to a rally last weekend at the legislature to show their support for the citizens of Ukraine, and similar events have been held across Canada.

Sereda Goldie said the war on Ukraine needs to stay fresh in people’s minds to ensure the world doesn’t resign itself to the events unfolding.

“There’s so much history and it’s challenging history to learn, but it’s important to understand,” she said.

Graham and Joanne Barnard stationed themselves across from Beacon Hill Park, sitting on a ledge and holding large Ukrainian flags that Joanne had made.

“We want to get [Russian President Vladimir] Putin out of there — this is terrible,” said Graham Barnard, who grew up in the United Kingdom. “I went through the last war as a kid and it’s awful to get bombed on.”

Joanne Barnard said she’s sick about what’s happening and believes many in Canada take true freedom for granted. “They just have no freedom left at all and their lives are in danger,” she said. “Today is important to show our support for them.”

Kay Charbonneau said she is saddened by the invasion and frustrated by how little can be done by individuals to change the situation. “If standing in support is all we can do then, then I’m wanting to take part in that,” she said.

Friend Helene Demers was holding a yellow and blue sign with the words of John Lennon’s peace anthem Imagine written on it. “I want to stand with Ukraine and I want to stand for the possibility of world peace,” she said. “I think it’s really important that around the world we demonstrate our support for the people of Ukraine.”

Pati-Ann Lawe, who is in a Ukrainian quartet called Luna and has family in Ukraine, said her niece had to escape to Poland. All are safe for now, she said.

“I want the West to do more for Ukraine,” Lawe said. “I can’t understand how Russia gets away with breaking all the international laws and rules governing war, and yet we cannot do anything for this country that has fought for so long for its freedom.”

Marina Gadbois was at the demonstration with her grandmother Olga Lang and friends Greg Glover and Misuzu Kurauchi.

Glover held a “no-fly zone” placard Sunday, saying Putin understands only “the language of force.” At the same time, he said he’s worried a no-fly zone could initiate a world war.

“I actually think it’s too late now — they should have enforced a no-fly zone before the conflict even started and then it would have been [Putin’s] step to break some invisible line,” Glover said.

“Now I am conflicted myself but I think we need to shoot down planes,” he said. “It’s just a matter of defence.”

But not everyone agrees — as Glover spoke, a person handing out leaflets and holding a placard opposing NATO establishing a no-fly zone, given the threat of sparking a bigger conflict.

Ukrainian President Volodymyr Zelenskyy has repeatedly called for a no-fly zone over his country, saying: “The world is strong enough to close our skies.”

However, Canada and its NATO allies have ruled out such a move, saying it would essentially lead to an all-out air war between NATO forces and Russia. Putin has made clear he’d consider it a hostile act, and European Union leader Charles Michel said Sunday that deploying fighter jets over Ukraine could “in current circumstances” be considered “NATO’s entry into the war and therefore risk World War III.”

Instead, the alliance of western nations has opted to send weapons and defensive equipment to Ukraine while attacking Russia’s economy with a series of unprecedented moves to isolate it.

Prime Minister Justin Trudeau arrived in London Sunday night for the start of a four-country Europe tour. He will meet with several leaders as well as NATO Secretary-General Jens Stoltenberg and visit the Latvian military base where hundreds of Canadian Forces are contributing to Canada’s leadership in that country of NATO’s long-standing deterrence mission to bolster its eastern European flank against Russia.

Before departing Canada on Friday, Trudeau said he wanted to join partners in finding ways to counter disinformation and misinformation that he said was a “particularly strong facet of this conflict, this war in Ukraine.”

— With files from The Canadian Press