Dunsmuirs’ luxurious automotive caught FDR through the Victoria go to 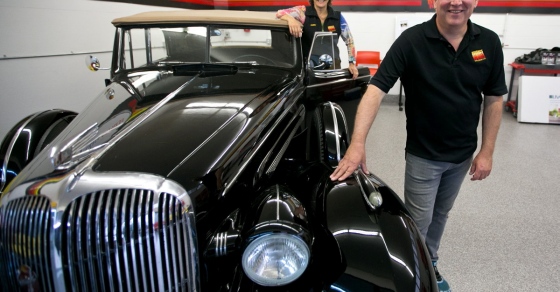 Sherry Baird wanted something special to mark the 53 year anniversary of her company, Advance Collision Ltd. to celebrate – and she found it in her uncle’s garage.

The 1936 McLaughlin Buick Roadmaster Phaeton caused a sensation at the company’s anniversary celebration this week as it did 78 years ago when it transported US President Franklin Roosevelt through Victoria.

Baird’s uncle Allan Botting said the black luxury convertible belonged to the Dunsmuirs, one of Victoria’s most prominent families, at the time of a US president’s first visit to the island. James Dunsmuir was a Lieutenant Governor and Prime Minister of BC

“The Dunsmuirs knew the government and the then lieutenant governor quite well [Eric Hamber] probably arranged to borrow the car for this one day purpose, ”Botting said.

In photos that appeared on October 1, 1937 with stories in the Daily Colonist and the Victoria Daily Times, Hamber is sitting next to Roosevelt in the Roadmaster Phaeton.

Three daughters of industrialist James Dunsmuir owned McLaughlin Buicks in 1936. Elinor Dunsmuir owned the one that ended at the bottings, and they named it Elinor in her honor.

Although the Botting family has owned the car for decades, they only recently discovered the connection to Roosevelt after seeing a story online about the visit.

“We looked at the photo and said, ‘Yes. This is Elinor because we know the three cars and they weren’t exactly alike, ”said Botting. “Only three were made and we know it’s Elinor because of the color and the wheel arches – the spares on the side of the fender. Elinor didn’t have them and the other two cars. So my father put them in later. “

Allan Botting’s father David bought the big old convertible in 1955 from a friend, Victoria businessman Allan Ford, who bought it from the Dunsmuirs during World War II, Allan Botting said.

“He drove it for quite a while and my father waited for him. In 1955 he called my father and said, “I can no longer drive a car. You come out and can drive the car, ”said Botting. So his father, who lived in Manitoba, came to Victoria and drove him back in the middle of winter.

David Botting, who turns 100 in October and lives in the Okanagan, worked in aircraft maintenance, but his son said the car was his hobby. “He drove it for years. It was all over Canada and across the states. He took care of it and rebuilt it. So it’s a family heirloom. “

The vehicle still has the original 320cc inline overhead valve engine and Buick. The transmission is a Studebaker Commander 3-speed manual transmission with overdrive. The car was recently valued at $ 84,000 for insurance reasons, but could fetch more given the historical connection.

But Botting, a mechanical engineer who brought the car with him when he retired from Calgary to Victoria three years ago, isn’t interested in selling.

“It goes to my son Paul. He’s also a car freak. It’s a family disease, ”he joked.

“We took it back to Victoria, Vancouver Island – where it belongs. It should stay in a museum here in Victoria, I think, but I don’t think there is anything suitable. “

The car is an important artifact, said Bruce Davies, curator of Craigdarroch Castle, which was built by Elinor Dunsmuir’s grandfather, Robert, in the late 19th century.

“Historically, it’s a very important car because of its association with Hatley Park, a great BC family, and it’s a rare car and a Canadian car,” said Davies.

Hatley Park, now the seat of Royal Roads University, includes a “castle” that was built for Elinor Dunsmuir’s father, James. While Elinor owned property in Comox, she traveled back and forth to Hatley often. It’s not clear how many times she would have used the 1936 car since she died in 1938, Davies said.

“Hatley Park has more terrain and the car would have been there on the premises. Of course there is a museum but it’s in the basement so I don’t know where they would put it, ”he said.

For the time being, Botting is content with taking the vehicle on classic car club trips. It was also used in the Victoria Day and Christmas parades. And this week he loaned it to his niece for the company anniversary party.

Baird was cleaning up and waiting for her uncle to pick up the car on Friday morning when she took the opportunity to sit quietly in the back seat where Roosevelt had sat eight decades ago.

“It’s a nice old car. It looks like a big old black limousine, ”said Baird. “I was just in awe.”