BC has highest non-religious population among provinces

Census data from 2021 released this week by Statistics Canada shows Greater Victoria has less ethnic diversity than the province as a whole.

Nearly three quarters of Greater Victoria residents trace their heritage back to the British Isles with 31.4% identifying their ethnic/cultural origin as English, 23.6% as Scottish, and 18.4% as Irish. The next largest ethnic identities in the region are German (12.3%) and Canadian (11%).

The top three largest visible minorities are the same for the province and the region: Chinese, South Asian, and Filipino. In Greater Victoria, 4.5% of the population identifies as Chinese, 3.5% as South Asian, and 2.2% as Filipino.

Unsurprisingly, given its relatively low ethnic diversity, Greater Victoria has a smaller immigrant population than the province as a whole (18.9% compared to 29%) with most residents who were not born in Canada coming from the United Kingdom, the United States, China , and the Philippines.

Most people moving from another country to live in BC do so for work, a trend that has held steady for nearly three decades. However, the proportion of economic immigrants in Greater Victoria jumped noticeably in 2021, rising to 72.8% from 55.7% in 2020. At the same time, the region saw a significant drop in immigrants sponsored by family members—from 37.5% in 2020 to 21.6 % in 2021—and a slight decrease in refugees to 4.8%.

Indigenous people make up 5% of the Greater Victoria population, slightly less than the BC population of 5.9%.

Even in the least religious province in Canada, Victoria stands out

At 52.7%, BC is the only province where a majority of the population is non-religious, although 59.7% of Yukon residents reported no religious affiliation. Overall, 34.6% of Canadians identify as non-religious.

Among City of Victoria residents, 63.4% identified as non-religious, making the BC capital the third most secular city in the country behind Kamloops and Nanaimo.

Across the Victoria census metropolitan area—which covers the Capital Regional District—60.5% of the population identified as non-religious, up from 51.2% in 2011.

The most prevalent faith in the region is Christianity with about a third of residents identifying as one of nine Christian sects, with Catholicism the largest group at 10.4% of the population. Overall, Christianity is on the decline in Greater Victoria; however, the number of Orthodox Christians has held steady since 2011 while the proportion of people identifying as “other – Christians” increased from 8.9% in 2011 to 9.6% in 2021. 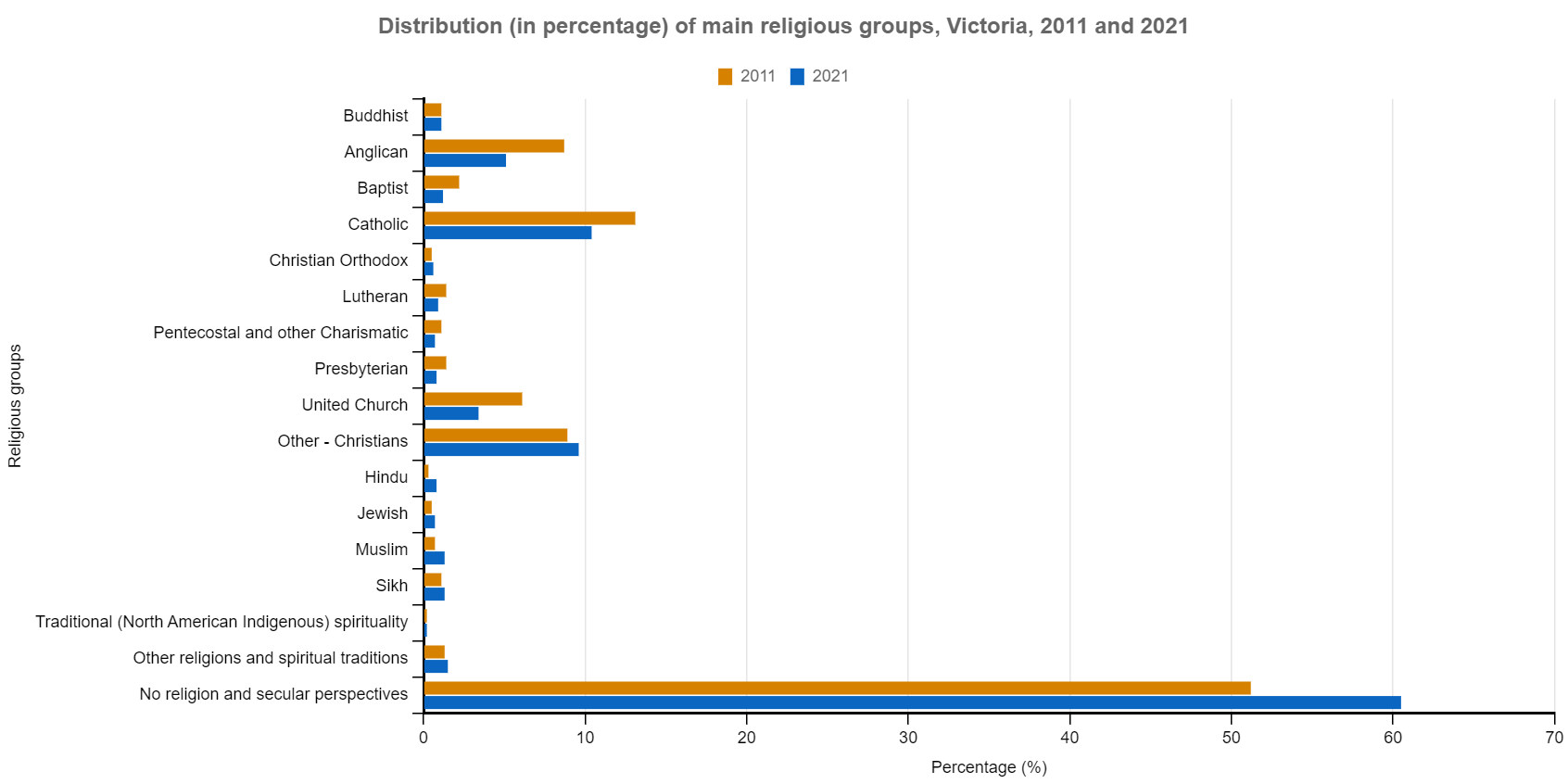 Outside of Christianity, the most popular religious affiliation in Greater Victoria is “other religions and spiritual traditions” at 1.5% of the population.

The number of Greater Victorians who identify as Muslim nearly has doubled since 2011 but remains a small part of the population at 1.3% while the number of people identifying as Hindu in Greater Victoria increased from 0.3% in 2011 to 0.8% in 2021.