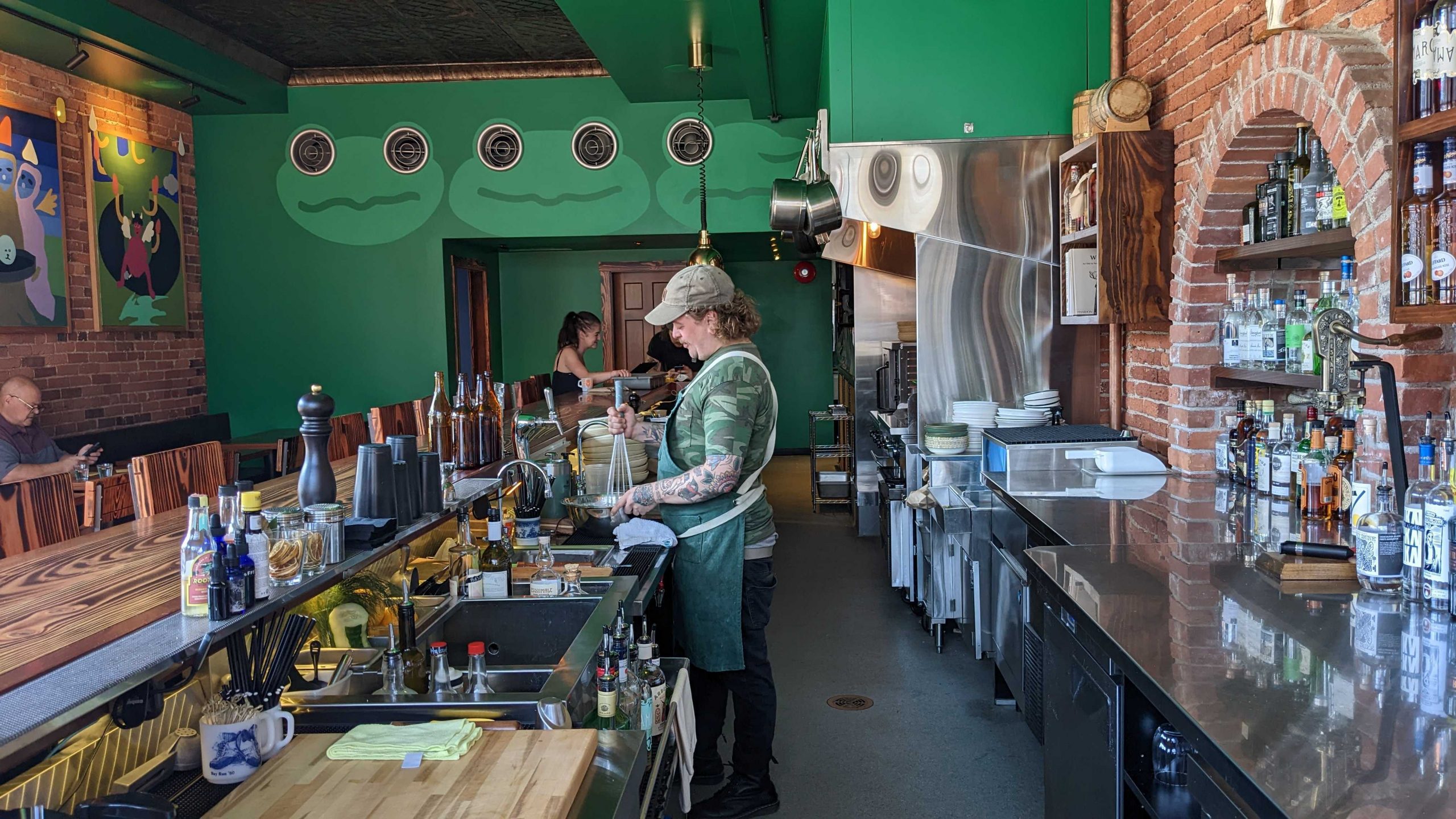 It’s a particularly hot and sunny Monday afternoon, and the buzz of the weekend has grown considerably quieter. But on the corner of Herald and Government streets, punk music bellows in the afternoon haze, while passersby peer into what’s become of the old Sager’s furniture store.

For weeks I’d seen the ambiguous art on the marquee at 1802 Government Street; the hybrid-human frog face peering over traffic jams, the words “end dive” scrawled beside it. It looked intriguing—like it could either be an art gallery or a dive bar—and it happens to be a little bit of both.

End dive, an ambitious, local-focused seafood restaurant and bar with a DIY ethos and a punk rock attitude, is the first foray into business for co-owners Tod Newton, Mat Clarke, and Kara Martyn.

As it happens, the food inspector and I arrive at the end of the dive together, half an hour after closing time on Monday afternoon. After eating there earlier that afternoon, I was back to see the team off-duty, planning for the next week.

The food inspector and I both peek into the restaurant while the sounds of clanking cutlery, cocktail tins, and laughter fill the room, past a jumble of chairs barricading the now-closed restaurant.

It’s a bright room—six-foot-high windows surround the space and the interior is a mix of red brick and bright-green painted walls, the same hue as the mad human frog face logo on the marquee. The walls are hung with paintings, following the theme artists Kai Choufour and Leah McInnis set with the restaurant’s logo: striking hybrid human/animal characters in bright shades of green and pink.

The mahogany and burned-fir bar top stretches the length of the entire restaurant—over 24 feet from one end to the other. Behind, the bar is fully stocked with local wines and locally distilled spirits. House-made orgeat syrups, berry dust, and bitters sprinkle the rubber bar mat.

Every Monday at this time, end dive cooks what’s left from the weekend to feed friends and family—the crew and other service-industry workers—in order to start fresh for Thursday, when the restaurant reopens.

A few familiar faces from Victoria’s service industry flip through the pages of a cookbook. “What about a salmon scotch egg?” suggests Jamie Reid, the general manager at Saint Frank’s. The group of three moans in hunger.

Chef David Fillier, covered in tattoos from toes to neck, invites me to grab a plate and dig in; I get the sense that it would be both rude and foolish to refuse. They ask if I want a beer. “Or wine? It’s gonna go bad,” Fillier offers, pointing to a few opened bottles.

Clarke—the head chef—makes sure to remind me not to review the leftovers (they were delicious).

Newton, Clarke, and Martyn met while working at Be Love catering to a certain crowd: vegetarians and vegans. Clarke was head chef there for seven years and Martyn was his sous chef. Newton was the bar manager. In early 2020, one of Be Love’s owners, Joe Cunliffe, started making plans to move the trio into a new space with a different idea in mind. The pandemic put those plans on hold until late 2021, when the four began working on the space at Herald street, each helping with the construction and interior design of what’s in the space now.

Many Victoria food and beverage industry workers were questioning their future in the industry during the pandemic.

A mass exodus had taken hold in the service industry, leading to a significant labor shortage across BC. In Victoria, some cafes, bars, clubs, and restaurants have cut down hours—others, mostly chains, are packing up shop entirely. Experts say that 20% of the workforce is gone, and around 3,000 BC restaurants have shut down since March 2020.

That industry crisis is more of a driving force than a fear for the owners of end dive.

“We’re not looking to pander to anyone,” Newton said. “We’re just doing it our own way.”

The trio is staying focused on their creative vision, which involves the sourcing and preparation of the food, but also the atmosphere they want to cultivate.

But sometimes reality can get in the way of creative vision. “At first, we had our sights set on the old Logan’s spot,” Clarke said. “We wanted to have punk shows, and that’s still the five-year plan.”

For now, though, Clarke is focused on making end dive into “the seafood place.” He says Victoria is lacking restaurants with a purely pescatarian focus.

“Every restaurant ends up catering to customers, bringing in steak dishes and whatnot. I wanted to properly focus on seafood,” he says. “I just want, when people come to Victoria, to go here—the seafood place.”

From the fish to the produce (most of which comes from their friend’s farm in Metchosin, Sweet Beans) to the art, everything is intentionally local. Fillier rattles off the origins of everything on a plate sitting on the (locally sourced) bar top: the cabbage, tomatoes, and onion are from Metchosin, as are the purple flower petals garnishing the dish; the nuts and dairy are from up-Island. The plate itself comes from Galiano Island.

“We’re building relationships with foragers, and soon, the fisheries—we’re getting into that market now,” Clarke said. “If you can, source everything locally and make your own stuff, I think it’s how you should do it.”

If no one can supply what they need locally, they make it.

“We’re trying out soy sauce,” Chef Fillier says with a hop in their step. They just need some time to ferment the koji. “We make our own pepper, even.”

The food is globally inspired too. Clarke says his travels throughout parts of South, Central, and North America, Oceania and Asia, expanded his palate of flavors, and he was surprised by how much could be replicated on Vancouver Island. “You can make an unbelievable menu, purely local,” he says. 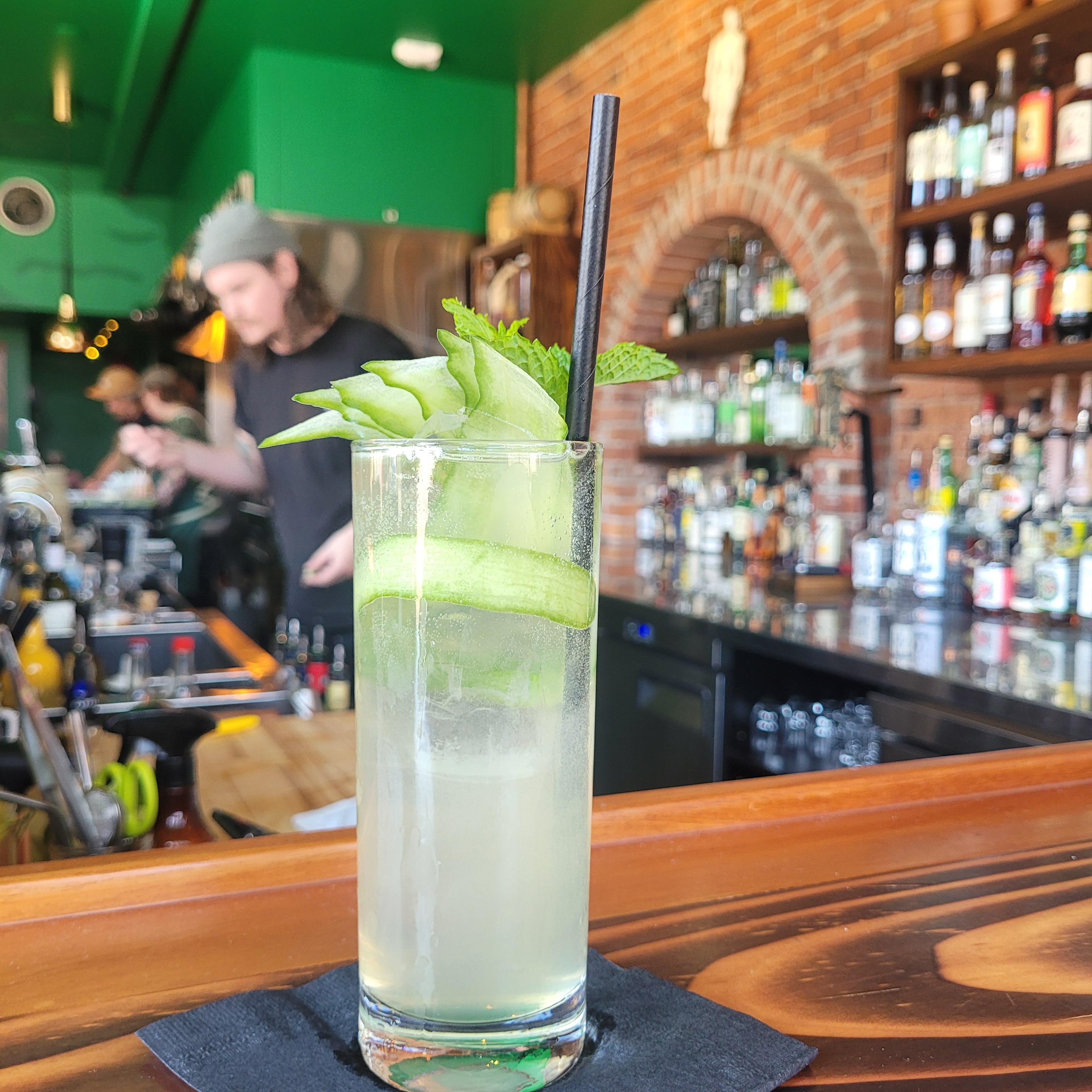 For lunch, I ordered the sugar loaf, an unexpected mountain of fresh tomatoes and plums slathered in miso basil dressing on top of half a head of sweet, crispy cabbage.

For my main, I got the Eggs on Eggs—a decadent egg salad sandwich with walnut spread on crusty country bread and smoked pickles bursting through a soft-poached egg.

My editor, Jimmy Thomson, got the Halibut Burger, a herby fish cake inside a soft milk bun, with pickled peach relish and lemon mayo. He remarked on the Esquimalt vermouth sitting on the shelf, and Newton whipped up a refreshing, impromptu vermouth-inspired drink.

A menu featuring pumpkin seed ranch or carmen wasabi is impressive as it is, but seeing the chef making every ingredient by hand is even more so. End dive isn’t shying away from the hard work—the owners even helped excavate the place, spending days in a hole with pick axes to carve out the grease trap. Chef Fillier says that kind of hands-on work is the reason they became a chef. “I have a say here,” they said.

Like the name suggests, end dive strives to go one step further. But don’t expect to be pampered—expect to be impressed.