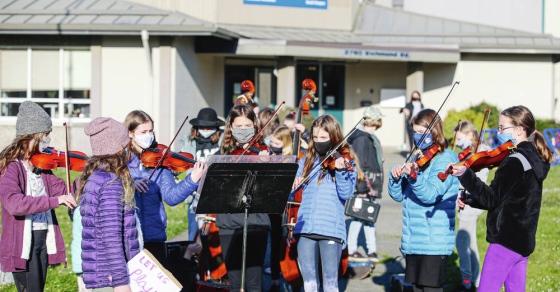 The province is injecting $ 1.2 billion into schools over the next three years, with almost all of the money going to raise wages for teachers and other staff and meet the needs of rising enrollments.

For the Greater Victoria School District, facing a budget deficit of $ 7 million, the fact that the province is paying the cost of wage increases in collective agreements is “really good news” as an important unanswered question for the budget of the The district was on whether the government would pay those costs, said Carolyn Howe, vice president of the Greater Victoria Teachers’ Association.

“And that’s a $ 5 million question, so we think that’s extremely positive for our local context right now,” she said.

It is not clear whether the budget contains enough funds to avoid program cuts entirely, Howe said.

Because of the deficit, the Greater Victoria School Board is discussing cuts to music programs, educational assistants, food programs, and programs for gifted students. Students, parents and teachers have expressed concern over the possible cuts, with a class from Lansdowne Middle School holding a street concert last week to show their support for music programs.

BC’s annual K-12 budget climbs to more than $ 7.1 billion, an increase of about $ 500 million from the 2019-2020 budget. However, with about $ 1.1 billion absorbed through wage increases and enrollment, “it’s essentially the status quo,” said Kevin Kaardal, president of the British Columbia School Superintendents Association.

“This is not a good news budget for these districts this year. And it will lead to some difficult conversations at the table, ”she said.

Many were disappointed Tuesday with the lack of funds in the budget to continue the pandemic measures, such as improved cleaning and an increase in staff.

Higginson said it appears that if there is a clearer picture of how the pandemic is progressing, money could come in from the provincial emergency fund in the fall -minutes crawl.

Howe expressed concern about the “wait and see” approach to support the pandemic.

“The money came so late last year that it was really hard to use it effectively. And we know the September pandemic certainly won’t be over and schools need funding and support to make sure we can cover PPE and improve our ventilation, ”she said.

Funding is being provided to support increasing numbers of students with special needs, indigenous learners and English / French learners, as well as improving psychological support in schools, expanding on-site childcare and developing a framework to combat racism and reconciliation.

Teri Mooring, president of the British Columbia Teachers’ Federation, said she was delighted with the targeted funding for local childcare and a framework to combat racism and reconciliation that the union had asked for, but also expressed concerns about the lack of funding for COVID -19 strategies implemented during the pandemic.

Improved cleaning “has got schools where they normally should be, as cleaning and detention time has traditionally been an area cut when districts have had to make cuts,” she said.