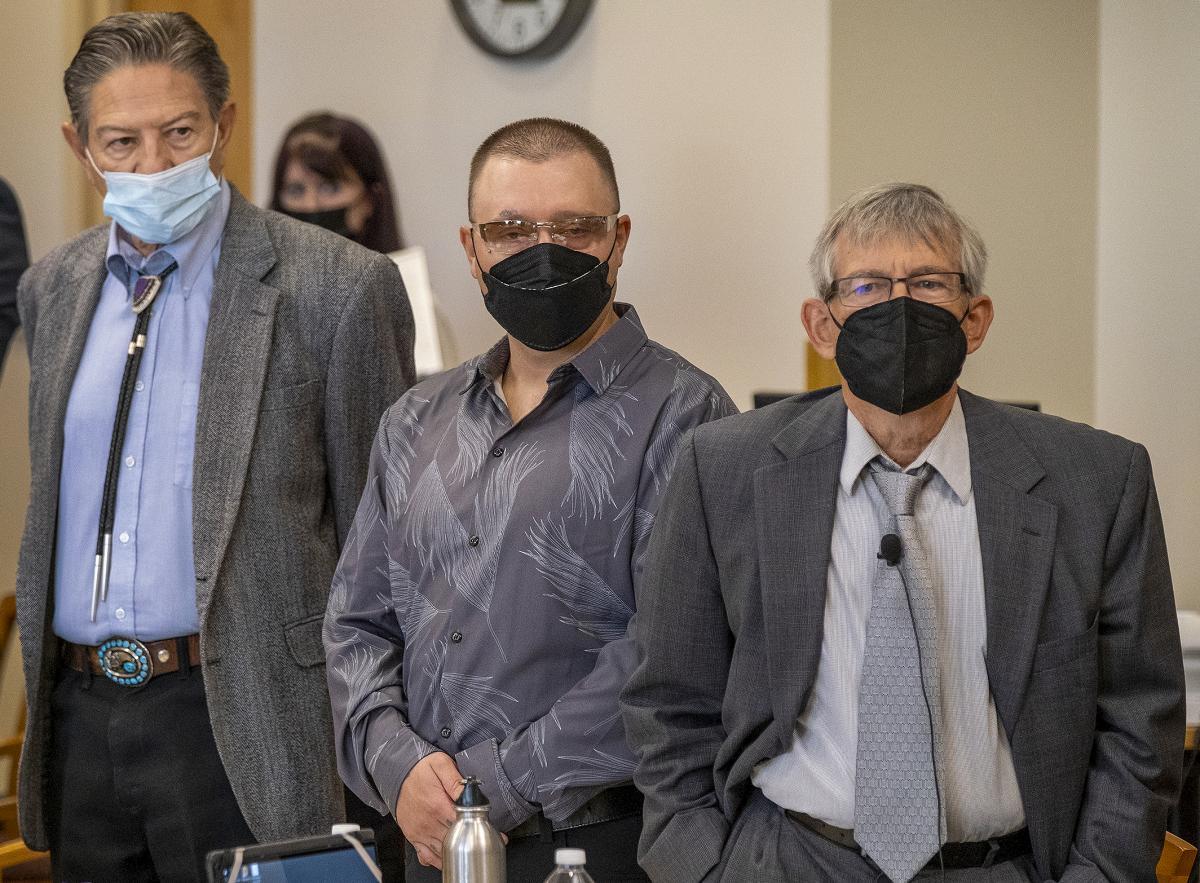 Fabian Gonzales did not kill 10-year-old Victoria Martens, but he created the dangerous environment that led to the girl’s 2016 murder, a prosecutor told jurors on the first day of his trial.

Gonzales, 37, “did not personally strangle Victoria, but he created the danger that led to her death, and he didn’t hesitate to tamper with the evidence of her murder,” Grayson said.

Gonzales’ attorney argued that the prosecution’s “star witness” was the actual killer and that prosecutors gave her a generous plea deal.

Attorneys delivered opening statements Wednesday in the first day of Gonzales’ trial on charges including child abuse, recklessly caused, resulting in the death of a child under 12.

After meeting her, Gonzales soon moved into Michelle Martens’ Northwest Albuquerque apartment, began inviting people over, and “transformed” Michelle Martens from an attentive mother into “a negligent mother,” Grayson said. Former APD officer Frank Pezzano holds a knife found at the scene the night of the homicide while taking the stand during Fabian Gonzales trial for his involvement in the 2016 death of Victoria Martens gets underway. The knife was used in the girl’s dismembering. (Adolphe Pierre-Louis/Albuquerque Journal)

The night of Victoria Martens’ slaying, “the defendant and his cousin, Jessica Kelley, tried to cover up their responsibility for the murder,” Grayson said. “They destroyed evidence by cleaning up the crime scene.”

Grayson showed jurors graphic photographs of the scene that illustrated what he described as an effort to conceal evidence.

Prosecutors allege that Kelley and Gonzales worked together to dismember the girl, placed parts of her body in a garbage bag, and washed bloody clothes and knives.

When Deputy District Attorney Greer Staley asked why she was crying, Kelley responded, “That’s my cousin. I grew up with him. I love him.”

Gonzales’ attorney, Stephen Aarons, countered that Kelley alone was responsible for strangling and dismembering the girl and for attempting to conceal the crime.

Prosecutors gave Kelley a generous plea deal in exchange for her testimony against Gonzales, Aarons said.

“This case is about who murdered (Victoria), why that person did it to her, and why the prosecution gave (Kelley) a plea bargain to be their star witness,” Aarons argued.

Kelley, 37, pleaded no contest in 2019 to six felony charges including reckless child abuse resulting in death, aggravated assault and other charges. She was sentenced in April to 44 years in prison.

Aarons told jurors that Kelley will become eligible for parole after serving 22 years of her sentence. Kelley was not sentenced as a “serious violent offender,” which would have required her to serve 85% of her sentence.

After Gonzales and Martens returned to the apartment complex, Kelley carried Victoria’s body outside and spoke with them in the parking lot.

“Jessica smiled and everyone thought Victoria was asleep,” Aarons said. “Jessica fooled everyone.” Kelley later tucked Victoria’s body into her bed as though she were asleep, he said. Gonzales made dinner, then he and Michelle Martens went into the master bedroom.

Amanda Holden, 51, flashes cleavage in blazer as she mimics…

“Jessica’s plan was both simple and crazy,” Aarons said. “She needed to get rid of the body. She was strong but she couldn’t carry the body, so she would cut up the body into lighter pieces.”

After Gonzales and Martens fell asleep, Kelley stormed into their bedroom brandishing an iron and yelled, “Do you believe in God?” Aarons said.

Jessica struck Martens in the face and the back of the head with the iron, then began striking Fabian, who threw the iron off the balcony, then jumped over the balcony himself and ran to seek help from neighbors. Gonzales called 911 to report Kelley’s attack on him and Martens, Aaron said. Martens ran to Victoria’s bedroom, but didn’t find her daughter, he said. Then Martens fled the apartment.

As Martens slammed the door on Kelley’s arm, Kelley shouted, “your baby is dead,” Aarons said. Martens didn’t know for certain that her daughter was dead until later, he said.

After Gonzales and Martens had left the apartment, Kelley set fire to Victoria’s body in a bathtub, Aarons said.

As police entered the apartment, Kelley jumped from the balcony, injuring her ankle, he added.

Michelle Martens, 40, pleaded guilty in 2018 to reckless child abuse resulting in death. She faces 12 to 15 years in prison. No sentencing hearing has been scheduled in her case.

Martens and Kelley are required by their plea deals to testify in Gonzales’ trial.

Both prosecution and defense attorneys acknowledge that cellphone records show Gonzales and Michelle Martens were not home at the time Victoria was killed. The two had gone to visit Gonzales’ brother and left Victoria alone with Kelley.

The girl was badly mutilated and parts of her body were on fire when officers found her, retired police Sgt. Christopher Enyart tested. Enyart and a second officer poured water on the girl to extinguish the fire, he said. An emotional Jessica Kelley takes the stand during the trial of her cousin Fabian Gonzales for his involvement in the 2016 death of Victoria Martens. Kelly is serving 44 years in prison for the crime. (Adolphe Pierre-Louis/Albuquerque Journal)

Grayson said Kelley will testify that an unidentified man entered the apartment and murdered Victoria.

Gonzales, Martens and Kelley were all charged in 2016 with first-degree murder, criminal sexual penetration and other crimes in Victoria’s death.

But in 2018, two years after Victoria’s killing, prosecutors dropped the murder charges against all three and issued a “statement of facts” with a revised theory. Prosecutors alleged that Victoria was killed because Gonzales had threatened rival gang members following a dispute at a barbecue two days before Victoria’s killing.

As a result, a man identified only as “John Doe” entered the apartment where Kelley was babysitting Victoria, asked for Gonzales, then entered Victoria’s bedroom and killed her, prosecutors alleged in the 2018 statement. They charged John Doe in June 2018 with first-degree murder, criminal sexual penetration and other charges in Victoria’s death.

During Wednesday’s openings, Grayson stressed that Martens had been a responsible mother until Gonzales came into her life. He said Gonzales quickly made Victoria’s life more dangerous, particularly when he invited Kelley to live in the apartment.

Kelley’s methamphetamine use also made her paranoid and made her more dangerous, Grayson said.

“Having Jessica Kelley stay in that apartment was danger no. 1 for Victoria,” Grayson told jurors. Gonzales “knew that Jessica had a violent past. He described her as an off-the-edge off-the-chain kind of girl.”