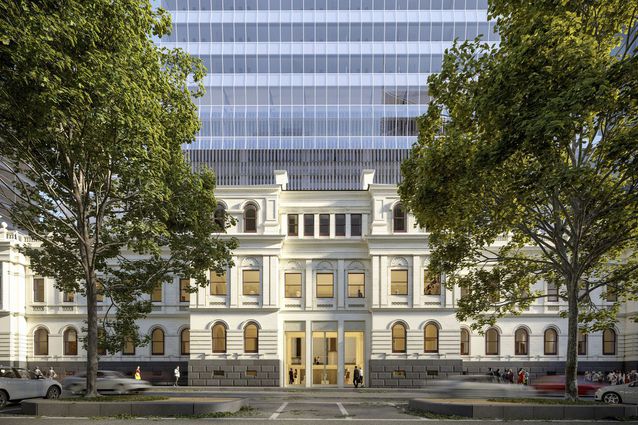 Heritage Victoria has twice refused an application to transform the former Land Titles Office into a high-rise office tower, once also earmarked as the site for a new Greek museum.

Designed by JJ Clark, architect of the Treasury building, the former Land Titles Office was completed in 1889 and is one of only two remaining 19th century buildings on the block of Melbourne’s legal precinct, the second being the Supreme Court.

In 2021, Heritage Victoria refused the application on the grounds that the tower straddling the Strong Room would have “significant physical and visual impacts on the heritage place”.

A development application to transform the building into a Hellenic museum, designed by Bates Smart, was rejected in 2021.

The height, width and overall mass of the proposed development would “overwhelm” the view of the office building, reducing the heritage building to a podium for the proposed tower. Heritage Victoria also said the proposed demolition of areas of the building to make way for the tower would cause “substantial harm” and “irreversibly diminish” the cultural and heritage significance of the Titles Office.

In January 2022, the executive director for Heritage Victoria accepted a proposal to amend the application to include a reduction in the height of the tower from 30 levels to 22, and a change the proposed use of the Strong Room and office building from the Hellenic museum to offices, affordable community spaces and hospitality venues.

The revised application was submitted to Heritage Victoria and rejected in July 2022, again on grounds that the partial demolition of the Land Titles Office building as well as the construction of the tower would devalue, diminish, and overwhelm the heritage structure.

The future of the heritage building is now uncertain, with Heritage Victoria acknowledging there is risk a project may fail or not be fully realized due to economic constraints, with the internal rate of return estimated as being “on the cusp of viability”.

The executive director has expressed concerns that any earmarked project could therefore see the Land Titles Office “being left in a more perilous state than it currently is”.