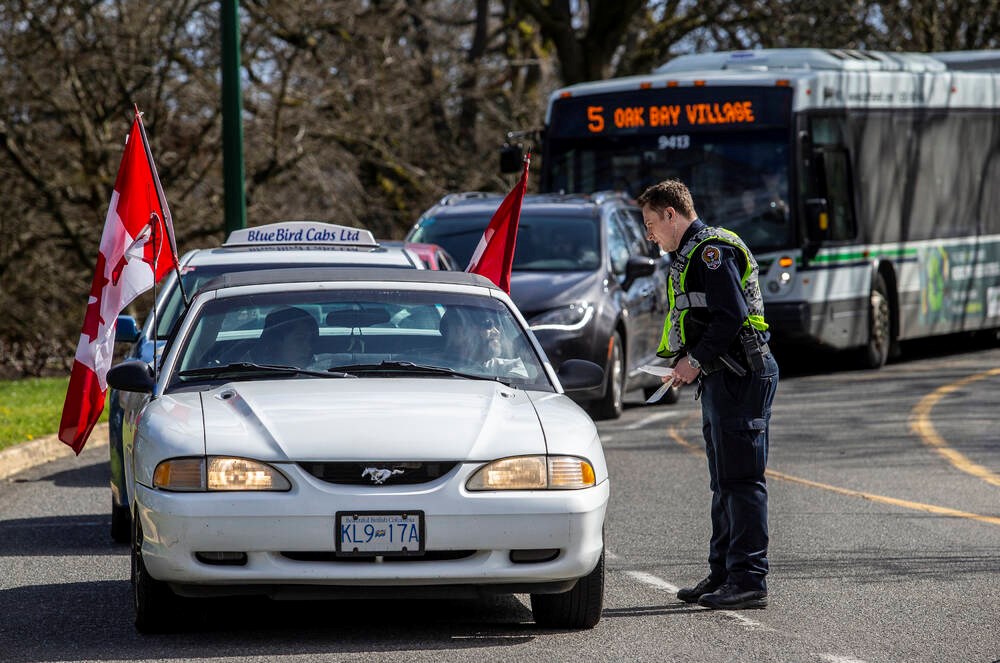 Victoria police said “controlled access points” designed to limit traffic into James Bay “will be in place for as long as is necessary for us to keep the public safe.”

With a larger, cross-Canada convoy expected to hit the Lower Mainland and Victoria in the next couple of days, Victoria police used the smaller, weekly legislature protest against COVID mandates to try out some new measures.

Though he wouldn’t concede that Saturday’s action was a dry run for a larger event, Const. Cam MacIntyre said the force’s use of checkpoints to limit access to the legislature precinct to local traffic only would be around for as long as required.

“It is a tool that’s in place and will be in place for as long as is necessary for us to keep the public safe,” he said. “And if that means that it’s for events that are anticipated, perhaps this upcoming week, they’ll certainly be in place.”

The checkpoints remained in place on Sunday.

It is unclear where the rolling protest called Bearhug BC might end up as the organizers at Canada Unity, one of the groups that started the Freedom Convoy of truckers that occupied Ottawa, have publicly said only that a site has yet to be determined. It is scheduled for 9 am Monday somewhere on the West Coast.

However, the Canada Unity website says trucks are on their way to Vancouver and Victoria to protest vaccine mandates and indoor mask orders. It suggests the convoy will be in Merritt and Hope today after crossing from Alberta into BC on Saturday.

Saturday’s checkpoint measures turned a lot of vehicles — part of the BC Freedom Convoy that included vehicles that left the north Island earlier in the day — away from the legislature Saturday afternoon, and forced protesters to park outside of the area and walk to the grounds.

“We had some success in preventing some of these protest-related vehicles that have previously impacted our ability to keep everyone safe in the area and to facilitate that environment of a safe, peaceful and lawful protest so that’s been good to see,” MacIntyre said .

“Unfortunately, we’re still seeing a lot of these large vehicles remaining in the downtown core and we’re seeing some significant traffic disruptions.”

However, James Bay residents got some relief from the “incessant honking and disruption” that have come with previous protests, “which is an important point of all this,” he said.

Police estimate about 1,000 protesters made their way to the legislature Saturday. Large groups marched up and down the streets in the afternoon, disrupting traffic, while others drove around outside the legislature precinct.

MacIntyre noted the department respects the right to protest and said everyone was welcome to come to James Bay — as long as they came by foot, bicycle or bus.

“This is meant to prevent the use of motor vehicles to impact our ability to provide an environment for safe, peaceful and lawful protest,” he said. “We have had eight consecutive weeks of disruption involving motor vehicles using air horns, including modified ship horns and train horns, and slow-roll blockades that have had significant impact on the health, safety and well-being of residents of James Bay and those in the BC legislature area.”

MacIntyre said the stepped-up response from police was also the result of increasing conflict between convoy protesters and opposition groups and police in other cities.

Saturday’s operation was expensive and labor intensive and involved reinforcements from Saanich and Oak Bay.

Reaction to the new tactics included outrage from those suggesting their right to protest was being threatened and those who thought it unnecessary.

One of the Island convoy organizers posted a video saying it looked like the police thought the convoy wanted to lock up the city, which he said was never the intention.

But the predominant reaction on social media was overwhelmingly positive, with a slew of posts thanking the police for bringing some peace and quiet to James Bay.

“We have heard from residents of James Bay and the legislature area for eight weeks, and we have been down there ourselves, and understand what they’ve had to endure,” MacIntyre said.

“We felt that we had to increase our response and we’ve seen a tremendous response from the residents in terms of their appreciation for us making this effort to increase their safety.”