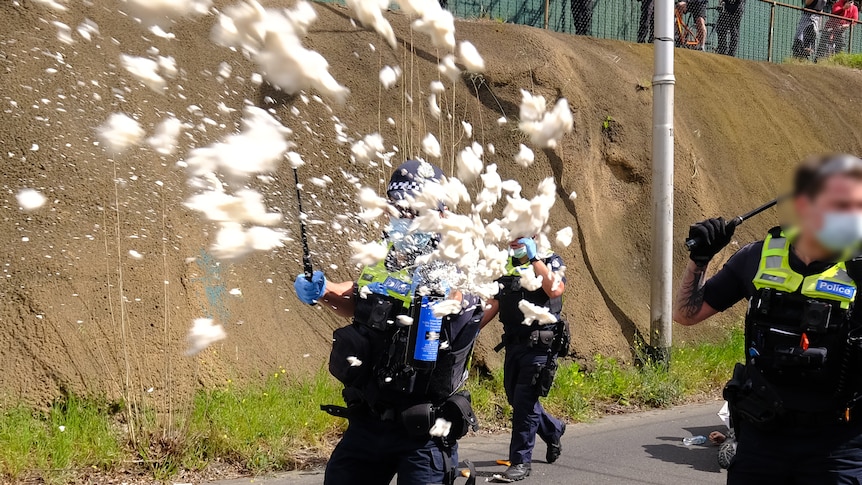 Two members of the press who were pepper sprayed by Victoria Police at two separate public events say they have decided to take legal action.

Photographer Luis Ascui was working for The Age last September when he was sent to cover an anti-lockdown protest in the Melbourne suburb of Richmond.

His photographs from the day capture the hundreds who had gathered to protest and the huge show of police force that greeted them.

Towards the end of the protest, he says his day took an unexpected turn.

“Police had jumped on a protester, I think he’d been pepper sprayed, and I just pointed my camera towards them,” he told 7.30.

Footage shows the moment Ascui was pepper sprayed by police.

Space to play or pause, M to mute, left and right arrows to seek, up and down arrows for volume. Video captured the moment Luis Ascui was pepper sprayed.

Victoria Police apologised, and announced Professional Standards Command would investigate. However, Ascui says he has little faith in that internal investigation and has decided to take legal action. Luis Ascui says members of the media have a right to do their job safely.(ABC News: Billy Draper)

“Whenever a situation happens and police get hurt, it’s a horrible thing,” he said.

“They go and they do work, they should be able to go home safely.

“Whenever we go to an event or story, we should also have the right to the same thing. We want to go home safely after working.”

His lawyer Jeremy King said he was shocked by what happened to his client.

“Even if he had been a protester, that would have been excessive force,” Mr King said.

“But the fact that he was simply trying to cover that event — and it’s incredibly important that the media cover those events — I thought it was absolutely outrageous, and really, something needed to be done about it.”

Victoria Police declined to be interviewed by 7.30. In a statement, it said given the Professional Standards Command investigation was ongoing, it would be inappropriate to comment further.

Four months after Ascui was pepper sprayed, Melbourne was finally out of lockdown and enjoying a summer of freedom.

Sports fans were preparing for the Australian Open until its biggest drawcard, Novak Djokovic, sparked a media storm when he arrived unvaccinated.

On January 10, the world number one had a victory in the courts, with a judge overruling the government’s cancellation of his visa and ordering that he be released from detention.

Djokovic’s supporters flocked to his lawyer’s office, hoping to catch a glimpse of their hero. Ian Ransom says no warning was given before he was pepper sprayed.(Supplied: Ian Ransom)

Reuters sports reporter Ian Ransom was sent to cover the story but suddenly found himself at the center of the action.

“I was there, watching the scene, from what I thought was a fairly safe distance,” he told 7.30.

“But one of the police officers … turned around in my direction and sprayed pepper spray into both my eyes.

“There was no warning given from what I could tell. I just couldn’t see it happening. It was completely unexpected.”

He said the pain was instant.

Space to play or pause, M to mute, left and right arrows to seek, up and down arrows for volume. Ian Ransom says he was in “excruciating” pain after being pepper sprayed. (Reuters)

“It was like nothing I’ve ever felt in my life. It was excruciating. It actually triggered a little bit of a panic attack at the time, like my whole body just sort of shut down.”

“I fell to my knees on the road and I was shaking. My heart was racing and I was screaming for water.” Ian Ransom the day after he was pepper sprayed.(Supplied: Ian Ransom)

Ransom has also decided to take legal action and he wants Victoria Police to review its use of pepper spray.

“Pepper spray is a very serious weapon, as I can attest to,” he said.

“And if police are unable to wield it in such a way where members of the public who may be innocent or not threatening are harmed, then the question does need to be asked, should they be wielding those weapons?”

Victoria Police said its pepper-spray policy was not under review, but it would review how police looked after people once they had been pepper sprayed.

His lawyer Jeremy King says it is hard to see how either incident fits within police guidelines, which dictate that pepper spray “should only be used where there are reasonable grounds to believe the use is necessary and proportionate in situations of real or imminent violence or serious physical confrontation”.

“In these situations, there is no violence or imminent risk being posed to police whatsoever,” he told 7.30.

“You have two journalists very calmly trying to cover events.

“And so it’s extraordinarily difficult to see how police could justify the use of pepper spray in these situations.”

Mr King said it was time police recognized the role of the media in ensuring accountability, transparency, and keeping the public informed, particularly during major events like the COVID-19 pandemic.

“Where police seek to interfere with that and curb what the media can and cannot do by either arresting them or pepper spraying them, that interferes with that right,” he said.

“And it’s a very, very dangerous trend in a democracy.”

In a statement, the Victoria Police said it understood the important role the media played in covering public events and worked with the media union to address any concerns.

It also revealed the Assistant Commissioner had reviewed Victoria Police’s response to the September protest at which Luis Ascui was pepper sprayed, and reported his findings to IBAC.

Watch this story tonight on 7.30 on ABC TV and ABC iview.