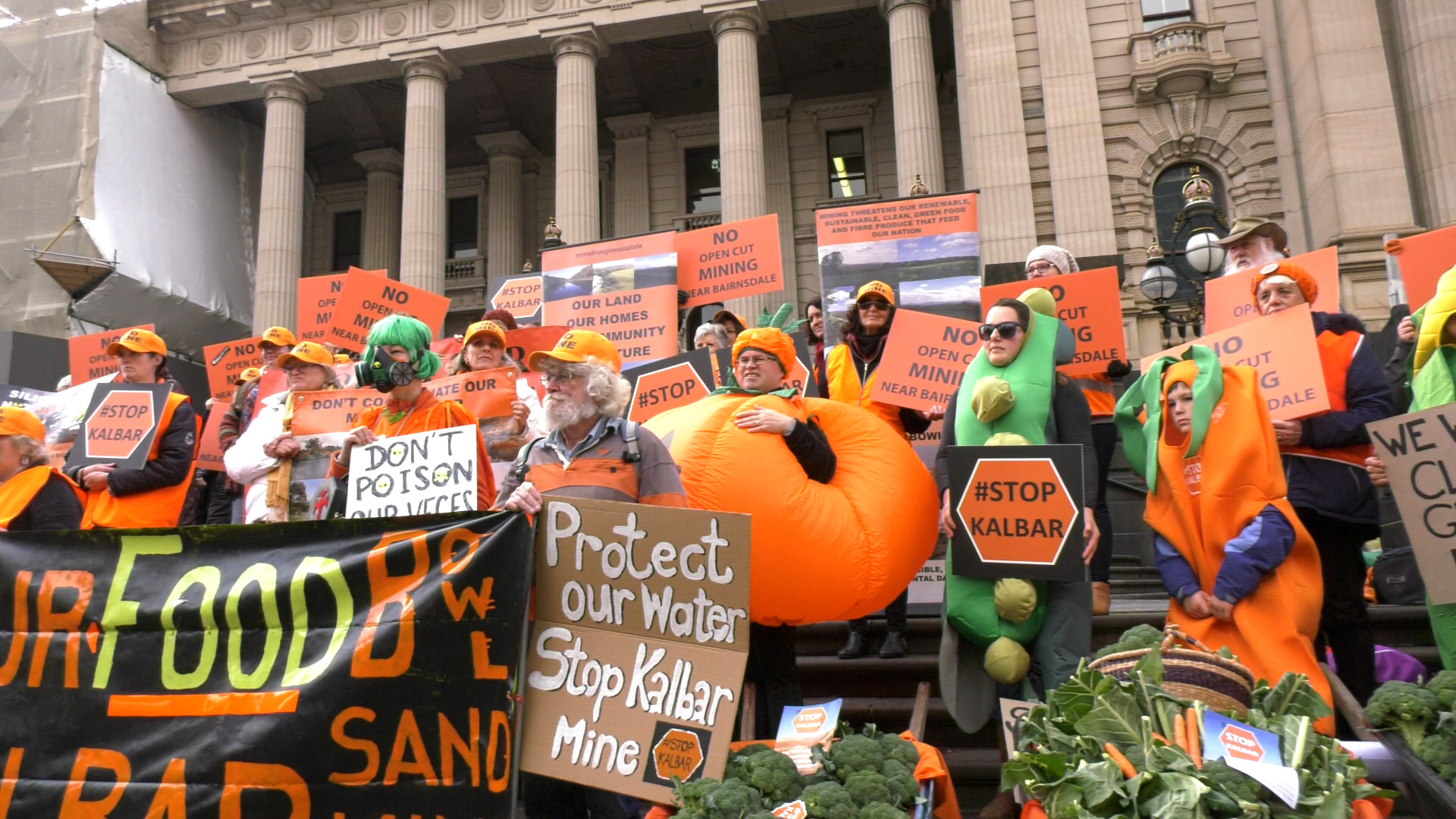 For exactly 100 years, Kane Busch’s family have farmed the fertile soils of the Lindenow Valley in East Gippsland, Victoria. After leaving Denmark in 1913, Kane’s great-grandfather Eiler Busch settled in the Valley, buying in 1921 the land that is now the home of Busch Organics.

Kane’s grandfather, also called Eiler, was behind the push for more environmentally friendly farming while experiencing the devastating droughts of the 1990s. The farm gained official organic certification in 2000. Grandson Kane is following in those footsteps, and was recently a finalist for a national award for “Young Grower of the Year”.

The Lindenow Valley produces the salad greens and vegetables – broccoli, green beans, cauliflower, celery, beetroot, cabbage and carrots – that help feed the nation. The Valley produces nearly one-third of the state’s vegetables; employs up to 2000 people at peak times; and is worth more than $150 million to the local economy.

The area also has huge environmental significance, with the heritage-listed Mitchell River, the Ramsar-protected Gippsland Lakes wetlands, and the Perry River’s unique Chain of Ponds, which is home to many threatened plant and animal species. Once ubiquitous across south-eastern Australia, “chain of ponds” systems are now rare.

But this is all now in jeopardy thanks to a mineral sands mining proposal from Kalbar Operations Pty Ltd (Kalbar), a company that was established as an investment vehicle and that has never operated a mine. It would be almost comical were it not for the potentially deadly consequences.

There’s monazite, which contains rare earth metals plus radioactive uranium and thorium and is thus potentially dangerous to residents, the waterways and the vegetables growing by the mine’s boundary; the competition for billions of litres of water; and the untried technology being proposed to tackle the mining waste. Nowhere in Australia is a mineral sands mine located so closely to, and upwind of, a major vegetable growing industry.

Kalbar is proposing a 1,675-hectare open-cut mine just 350 metres from the Mitchell River, which flows into the Gippsland Lakes wetlands. The mine will operate 24 hours a day, 365 days a year, for 15 years. A public hearing is under way as part of the inquiry into the Environment Effects Statement (EES). The following information has been revealed during the hearing.

Big miners walk away, lack of water the key risk

The multinational miner Rio Tinto originally owned the mining exploration licences. In 2011 Oresome, a subsidiary of Metallica Minerals, entered into a right to explore and option to purchase agreement with Rio for the licences.

A scoping study it commissioned showed a mine could be viable only if there was a dependable water supply. The risk of not finding a reliable source of up to 6.2 billion litres annually for an acceptable price received a Category F rating, defined as a problem with possibly “no viable solution” and a “fatal flaw”.

Kalbar then bought the licences. While Kalbar noted in its 2015 financial report to ASIC the high levels of contaminants. it has not included this information on its website.

Associate Professor Gavin Mudd from RMIT University has told the public hearing that the uranium levels are of a similar magnitude to those found in commercial uranium mines. Kalbar’s proposed mine will sit on the plateau high above the Mitchell River with the vegetables growing just metres from the river.

The mine is 3.5 kilometres from the main source of the region’s drinking water (other than tank water). The mine and the horticultural industry will be in direct competition for water, with both relying on the Mitchell River and the same groundwater.

Kalbar initially claimed in its EES that the mine would require 3 billion litres of water each year, less than half of the 6.2 billion litres outlined by the 2012 Robbins scoping study.

Just before the EES hearing was to start, Kalbar’s consultants acknowledged they had made a mistake in their water estimates. They identified the use of centrifuges to reduce the amount of water required. (Further explanation below.)

As for access to groundwater, in the only bore test Kalbar conducted, it encountered difficulties trying to access sufficient water from the aquifer. Kalbar is now proposing a second bore test that is outside the proposed bore field.

Kalbar also used rainfall data over a 117-year period (1900-2017) contrary to recommendations from the Department of Environment, Land, Water and Planning that the period from 1975 to the present day should be used to better represent the impacts of climate change.

Treatment of mine waste

Also controversial is access to how mine waste will be managed. The mine’s original design included a 90-hectare tailings dam.

But when government agencies and others highlighted the extreme danger such a dam posed to the Perry River and the Chain of Ponds, Kalbar changed its proposal.

The mine now plans to use giant centrifuge machines to remove water from the tailings waste, and then reuse that water.

The East Gippsland Shire Council, which unanimously opposes the mine, was not convinced of the viability of centrifuges, which are untested in mineral sands mining. The council commissioned a report from an independent mining industry consultancy, Ausenco.

Ausenco’s report raised concerns and advised that many more centrifuges would be required than Kalbar proposed. Then just weeks later, of its own volition, Ausenco issued a new report .

This “unsolicited” report, as the council described it, backtracked on doubts Ausenco raised in its first report.

It was also revealed that a commercial conflict existed between Ausenco and the project’s investment company Appian Capital Advisory, a financial backer and, at one stage, the majority owner of Kalbar.

A letter to Planning Panels Victoria from the shire council’s legal representative stated that:

“Ausenco has since informed us of the existence of a ‘commercial conflict’ having arisen in relation to the work it was engaged to undertake on behalf of the Council. …

The conflict arises in circumstances of Ausenco, through one of its wholly own subsidiaries, currently completing work for an entity which is ultimately the 100% owner of the Fingerboards Mineral Sands Project.”

The letter added that:

“Until that information was received, the Council had understood Ausenco to have satisfied itself that no such conflict existed.”

Kalbar plans to mine for and partially refine zircon, titanium-bearing rutile, ilmenite and rare earths minerals.

The heavy metals can also accumulate in soil, pastures and crops where dust is persistent. Opponents of the mine argue that given prevailing winds can reach more than 100kmh, dust will inevitably be generated, a point Kalbar acknowledges.

When asked during the hearing how dust could be controlled, a spokeswoman for Kalbar’s consultants RMCG suggested windbreaks would be used.

This was not a strategy proposed by Kalbar’s air quality consultant Katestone Environmental Pty Ltd.

“You just can’t protect the fields from the dust,” says Kane Busch. “My employees are out in the fields all day; and they have young families. The risk is too great.”

RMCG also claimed there would be no reputational damage to growers because the public was more concerned about the look of vegetables than where they were grown. Broccoli growing in the fertile soil of the Lindenow Valley. In the hill in the background is the location of the proposed mine.

However, in 2016, people from around the country were hit with salmonella poisoning after eating contaminated pre-packaged lettuces grown in Werribee, Victoria. The reputational damage was enormous.

Growers are also concerned that their quality assurance certification would be affected by toxic dust and grit issues. As Kane explains, “Our produce is tested regularly for residues and we risk losing our certification if even traces are found.”

In the Environment Effects Statement, RMCG did not address the potential for soil, and thus vegetables, to absorb radioactive materials, although it did respond to concerns about surface dust. It suggested this would be largely resolved because people wash vegetables before eating them.

In SGS’s Radiation Assessment Report in the EES, it states (p.48):

Rather than being “normal convention” to wash vegetables, growers have given evidence that many vegetables are not washed immediately before or after harvesting because this can introduce diseases and/or affect the life of the vegetable during transport.

Furthermore, while there is a clause that says growers can be compensated for crop damage, they have to prove the source of the contamination and take legal action, which would be financially prohibitive.

Kalbar has not conducted baseline studies, making it impossible for growers to argue what was the source of the contamination.

“It’s a perfect storm,” says Kane. “The mine will be up there on a plateau, right above the vegetable growing area.”

Most mineral sands mines in Australia are on flat land. But this one will be excavated on hilly country with a number of steep gullies, above the Mitchell River.

Opponents have noted that with 19 water catchment dams planned on those gullies and creeks, if any don’t hold, the contaminated water and suspended solids will cascade into the river and on to the vegetable fields. In the foreground is the Lindenow Flats; the mine site is on the plateau high above the Mitchell River

Mixed messages from the state government

Nearly two years ago, in July 2019, the Victorian Government announced that the Lindenow Valley would be permanently safeguarded from mining because of its high value.

So it seems incongruous that while the farmland is protected, the government is considering the approval of a mine that poses dangers to the very land highlighted as being so valuable.

Michael West Media put questions to Victoria’s Agriculture Minister Mary-Anne Thomas but has not yet received a response.

Meanwhile, local residents and growers say that co-existence with such a mine is simply not possible.

“The horticulture industry is being treated with contempt,” says Kane.

Kalbar responded: “We refer you to our Fingerboards Project website to review all the EES documentation. Kalbar Operations is following the Environment Effects Statement approval process and currently the Inquiry and Advisory Committee, appointed by the Minister for Planning, is undertaking the Panel Hearing as part of the approval process. Further documentation relating to the EES and tabled at the Hearing can be found on the Engage Victoria website. Kalbar Operations looks forward to completing the EES approval process and the Minister’s decision in due course.”