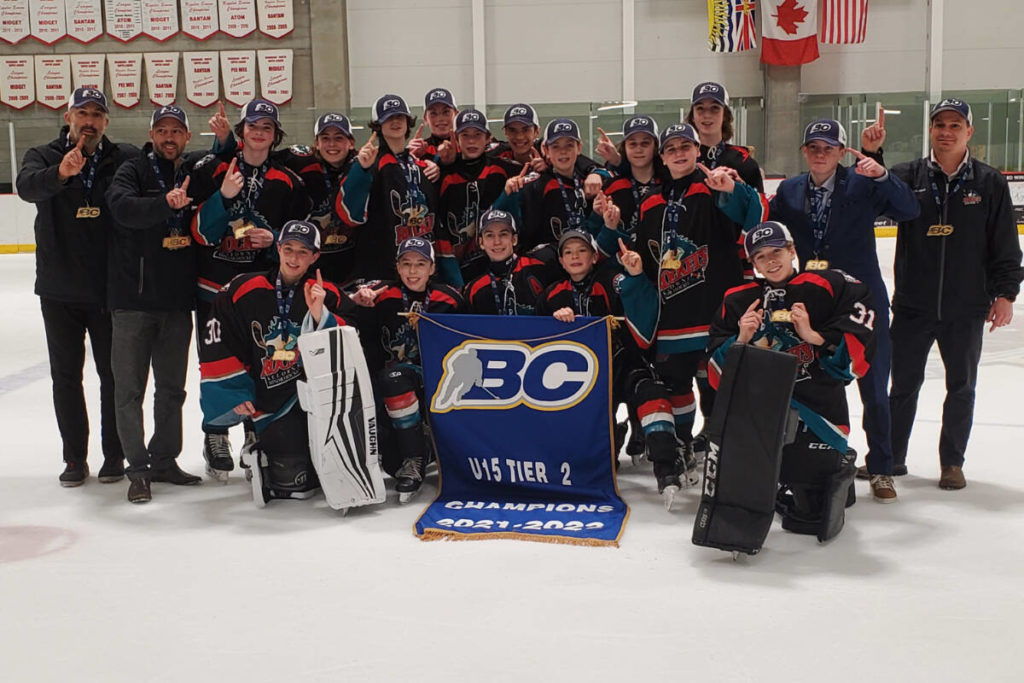 Two game-winning goals in one day.

Hi first came in sudden-death overtime Wednesday morning, March 23, about 10:30-ish, at Kal Tire Place North Arena in Vernon, giving Kelowna a 7-6 win over the South Delta Storm and sending the Rockets to the BC Tier 2 U15 hockey championship final later that evening.

Sichewski’s second game-winner came nearly nine hours later, a little before 7 pm His third-period powerplay marker with nine minutes left in regulation time snapped a 2-2 tie and lifted the Rockets to a 3-2 win over the Victoria Admirals in the provincial championship game.

“The first one (vs Poco) I don’t even know how it went in, it just kind of trickled in over the line,” said Sichewski in the on-ice celebration after the Rockets were presented their gold medals and BC champion hats . “This one was just really exciting. It was awesome. I just went for it (the shot) and it went in.”

Both teams had been undefeated heading into the championship game.

It was the Admirals who struck first late in the first period.

Lucas Border made a beautiful seam pass to a wide-open Matthew Levecque on the left wing who ripped a one-timer past Kelowna goalie Finn McKiernan.

The next three goals in the game will be talked about by both teams because it took discussion among the three on-ice officials to declare the goals as valid.

Joshua Douglas tied the game for the Rockets at 3:57 0f the second period. His sharp-angle shot appeared to be stopped by Admirals goalie Aneel Parmar at the near post but the officials talked for nearly two minutes before deciding the puck had crossed the goal line.

It stayed that way until Carsten Campbell jammed home a loose puck off a Roman Stacy breakaway after Parmar made the initial save at 6:29 of the third. The referee immediately pointed to the net, saying he saw the puck cross the line, and confirmed the decision with the two linesmen. Advantage Kelowna at 2-1.

Jasper Keast tied the game for Victoria 80 seconds later, though the goal wasn’t declared good until nearly 30 seconds after it went in. Keast ripped a wrist shot that beat McKiernan over his left shoulder but appeared to most people in the building that the puck hit the crossbar. As soon as play was stopped, the ref had a quick chat with the linesmen, then pointed to center ice, indicating a good goal.

All three Kelowna goals came on the powerplay.

“Our special teams have come a long way since the middle of the season,” said Rockets coach Bruce Kristinson. “We’ve really put a priority on our powerplay. We’ve got a lot of guys who can do the job out there, a lot of depth so we definitely felt like that was the strength of our game today.”

Despite the heartbreaking defeat – Victoria trailed only three times in five games in the tournament – coach Jeff Rafuse, well, refused to look at the negative.

“I couldn’t be more proud of the effort of this group,” he said. “They’ve shown resiliency all season long, fought to the end, and we lost to another great hockey team. It was a good way to finish.”

The Admirals advanced to the final with a 5-2 win over the Port Coquitlam Pirates in a Wednesday morning semifinal.

After spotting the Pirates a 1-0 lead midway through the first period, Victoria erupted for four unanswered goals over the next 10 minutes to take a 4-1 lead less than a minute into the middle frame.

Jack Hall scored three times for the Admirals while Quinn Cramb and Brody Armstrong had the other markers. Duke Crowle chipped in with two assists.

Chase Hemmerling-Maclean and Jared Whidden scored for the Pirates.

Sichewski’s heroics at 6:54 of OT put an end to the wild semifinal between Kelowna and South Delta.

The wild contest featured five lead changes with Maddox Stevens of the Rockets forcing overtime with his second goal of the game with 85 seconds left in regulation.

The Storm had rallied from a 5-3 third-period deficit with goals from Connely Parker, Damian Dumas and Dominic Dumas 1:41 apart to take a 6-5 lead.

Queen Victoria to Gown in Purple for Worldwide Girls’s Day