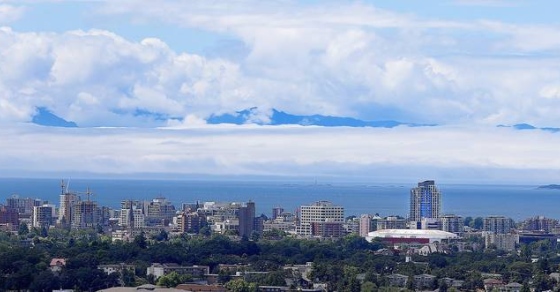 Too much equality in new architecture

Victoria is growing, buildings are getting taller. We can observe the newly built high-rise buildings that now dominate the skyline. Unfortunately, we are dealing with square or rectangular buildings. The tourist attraction of our city will suffer as a result. All over the world we see buildings that break the square / rectangular rule.

It is time to belatedly insist that new designs break through the current, uninteresting patterns that dominate our skyline. We only need to look at Europe and the Middle East to come up with imaginative architecture. It’s not too late to follow some of these building concepts.

I always wonder why hikers and hikers think that they are the only ones allowed to enjoy a peaceful and beautiful experience. They are fit and healthy and can run and enjoy many places that the less fortunate cannot.

My girlfriend has been using a wheelchair for many years and it brightens her day / week when someone takes her car to Esquimalt Lagoon or Dallas Road, actually anywhere the car can be parked for an hour and she can see the beautiful sky and Water and feel the breeze on your face, watch children play, even through a car window.

Please stop grudging this lovely lady, and so many like her, with one of the little joys in her life. She has very few others.

Why are bars still open?

In addition to banning community events, I wonder why health officials aren’t closing the bars again. It has recently been reported that the 20-30 / 40-year-old age group who populate these high-risk environments is driving COVID numbers up. Seems like a breeze.

Encounter with a lagoon barrier

We recently took a nice leisurely drive along Esquimalt Lagoon and we were at the barrier and had to do a U-turn and divert our Ocean Drive and drive through Colwood to come back to the lagoon to visit the food trucks a snack. Such a waste of time and fuel and a waste of time enjoying the beautiful scenery.

In the past, language developed organically, and words acquired new meanings over time as they gradually spread. That won’t happen today.

Now the language is being hijacked unilaterally by a small number of academics who are demanding that a new definition be used for a word, but also that all other previous definitions be null and void by royal decree, as if they never existed , and the punishment for not going with him is bigoted.

It is postmodern philosophy, rooted in the philosophy of romanticism, that decided that feelings are more important than facts.

“Eskimo” is a strange case because – despite claims by people who abuse and redefine the term “colonial” – it was not a word that came from the white man; it was from various Algonquin tribes in North America and was considered a “raw meat eater”, although it could possibly mean “snowshoe-laceer” as well.

Why are people so obsessed with whether something is offensive? I mean, I don’t want to be an idiot and I don’t want to be either, but the critical postmodern theorists keep moving the goalposts, which is incredibly unfair and an idiot in and of itself.

Solve a nasty problem with geese

That will never happen, but it would solve the problem: shoot the geese.

I have a 1950s attitude towards pesky animals; if you attack them, they will disappear.

Ask any deer hunter where the deer are the day after the start of the hunting season – they are gone. If a couple of bird hunters were allowed to go to a park early in the morning or the park was closed for a morning, they’d probably fire a shot or two before every goose was gone.

It won’t be long before the geese are looking for other places to poop.

It’s time Canadians stopped being so benevolent of these urban free riders and reclaimed their turf.

A very well-rounded article from Jack Knox. It seems to me that Sue McMurter knows the situation of street survivors all too well. The article makes it clear that she had a bit of bad luck, a few good breaks and clearly a lot of personal courage and perseverance in order to finally find and shape a good future. Of course, things could easily have been different.

It’s been quite a success story, but it also underscores our current dilemma of how to help those who need it, but, as she says, “it’s not good enough to offer harm reduction strategies that aren’t accompanied by treatment”.

It seems to me that some provincial and municipal government officials could learn from their experience and ideals.

Send us your letters

Submissions should not be longer than 250 words; edited for the sake of length and clarity. Do not send any letters as e-mail attachments.