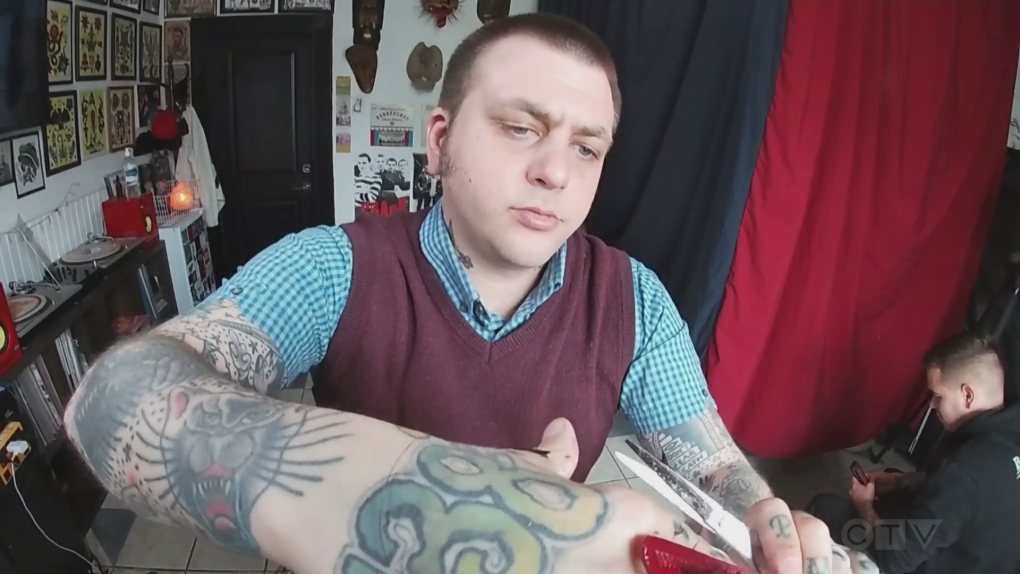 It wouldn’t be surprising for Daryl Bidner’s regulars to walk into his one-room barbershop and notice the big screen TV on the wall (surrounded by drawings of classic tattoos) showing the 1986 movie Little Shop of Horrors.

Before he started his barbering business, Daryl was wondering what to call it.

So he named it Little Barbershop of Horrors, after the musical he loved as a kid, before he became partial to punk as a teenager.

“I used to be able to cut my own friends’ hair,” Daryl recalls, showing pictures of his own gravity-defying, orange-dyed hair.

Around the same time, Daryl dropped out of school, struggled with addiction, and eventually experienced homelessness.

Although he tried to get healthy for years, nothing seemed to work. Then, one night, on a whim, he decided to get a tattoo.

“I came home and didn’t use that night,” Daryl smiles. “I felt great. I was stoked to look in the mirror and look at my new tattoo.”

So Daryl started getting new ink every couple days. By the time he got his 40th tattoo, he says he’d stopped using.

He considered becoming a tattoo artist, before re-connecting with the creativity he expressed as a teenager, cutting his friends’ hair. Daryl started training to become a barber.

“I’d never had much education,” Darryl says, describing how intimidating it was enrolling in barbering school after failing to finish high school.

So Daryl did the work, paid his dues, and about three years ago, opened his own one-chair business.

“Trying to be the best person I can be.”

That includes giving back to his community whenever he can — from supporting local bands by playing their records in his shop, to offering free haircuts every month to people in a nearby homeless shelter.

“It makes them feel better,” Daryl says, speaking from his own past experiences on the street.

“Hopefully it gives them a little inspiration.”

While the name of Daryl’s business was inspired by a movie musical about surviving a carnivorous plant, The Little Barbershop of Horrors is proving to be a real-life testament to overcoming adversity and thriving with creativity.