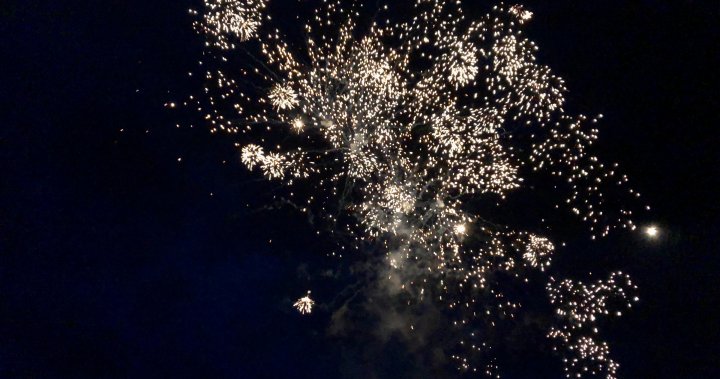 Officials in London, Ont., say planning is underway for how the city will respond to fireworks on Canada Day after celebrations over the Victoria Day long weekend yielded a series of complaints.

Under the city’s current firework bylaw, Londoners are only allowed to set off fireworks between dusk and 11 pm on Victoria Day and Canada Day.

Some exceptions apply and fireworks can be set off during those times on the Saturday preceding or following Canada Day if the holiday happens to land on a weekday.

Ward 2 Coun. Shawn Lewis says he received “quite a number of complaints” indicating the bylaw wasn’t followed over Victoria Day.

“The big thing that’s bothering people is the fireworks that are being set off at midnight, 1 am, 2 am, disrupting people’s sleep, scaring animals,” Lewis told Global News.

Lewis brought up those complaints during Tuesday’s meeting of city council to ask city staff whether additional bylaw enforcement staff were available on Victoria Day, as well as what plans are being put in place to prevent similar complaints arising from come Canada Day.

“Staff indicated when I asked last night that they hadn’t staffed up and there wasn’t that after-hours number available … so I asked them to look into making sure that was available for people heading into Canada Day,” Lewis said.

“I have no problem with people having fun and enjoying the firework celebrations — I enjoy them myself — but they’ve got to be at the right time on the right days. They’ve got to respect the bylaw.”

Vancouver’s ban on sale and use of consumer fireworks in effect Nov. 1

Deputy Fire Chief Matt Hepditch says the London Fire Department and other city officials are now in talks on how to prepare for fireworks on Canada Day.

Even if additional staff are provided, there may still be some challenges when it comes to enforcing London’s firework bylaw.

Hepditch says that’s because most complaints only include an area of ​​where fireworks are being discharged, rather than a specific location. Even if a specific location is provided, there’s a chance the illegal firework display could be over by the time officials arrive.

“What we need to do is we need to increase our education again, get more information out to the community and that’s one of the things I believe we will do,” Hepditch added.

As for complaints, Hepditch said the fire department received more than 30 over the weekend, including one call where firefighters responded to fireworks being discharged in a park, though no injuries were reported as a result.

‘It was one Roman candle’: Family in legal battle after losing Vancouver home to fireworks

Elsewhere, a petition that calls for the outright ban on the sale and use of fireworks in London has garnered more than 2,000 signatures since its launch 10 months ago and received new support over the long weekend.

Lewis, the councilor pushing for additional resources to respond to firework complaints on Canada Day, disagrees with implementing a ban, adding that Londoners looking to buy fireworks could just shop in a neighboring municipality.

“The reality is we already have a ban on fireworks 362 days of the calendar year and that hasn’t stopped fireworks from being set off outside of the times prescribed,” Lewis said.

“We also don’t want to be the city that fun forgot.”

1:58
Toronto looks to curb usage of illegal fireworks after influx of complaints during pandemic

Toronto looks to curb usage of illegal fireworks after influx of complaints during pandemic – Apr 28, 2022