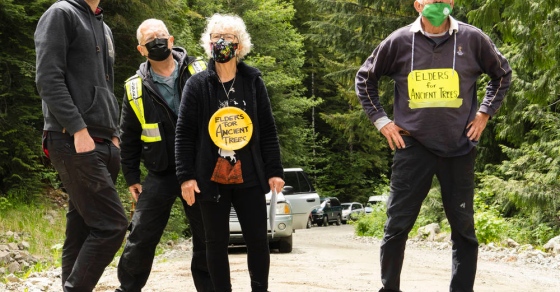 About 75 metropolitan area seniors traveled to the Fairy Creek watershed Tuesday to show their support for environmentalists blocking logging roads since last August.

The group, who said they were traveling at the invitation of Pacheedaht Elder Bill Jones, met at the park-and-ride in Sooke and drove in convoy to the area where the last remaining unprotected old forest is on south Vancouver Island is located.

About a third to half of the activists said they were ready to be arrested, “including me,” wrote Victoria protester Sally Glover in a text as she made her way to Jordan. “We bring food and carry signs with yellow circles that read ‘Elders for old trees,'” she wrote.

The group walked right past two police officers manning the blockade, Glover said after returning to Lake Cowichan around 6 p.m. Environmentalists at the camp jumped up and down excitedly when they saw the senior activists, she said.

“We all felt very comfortable. We all passed the barricade. The police left and did not come back. They took all of the yellow tape so we could walk over freely, ”Glover said. “It was exciting. … But it would have been really exciting to have been arrested and not charged, but we didn’t have to. That was great.

Saul Arbess, 82-year-old member of the Rainforest Flying Squad, said it was great to have the elders out there, “because, from my point of view, we are protecting the elder trees.

“It’s a very spirited group,” he said. “The people at headquarters and at Fairy Creek were very happy to get to know us.”

Jackie Larkin, 76, said the provincial government lied about its willingness to protect ancient forests. “It is my responsibility to stand with the old trees and against the forest companies and chainsaws that destroy valuable ecosystems,” Larkin said in a statement from the group’s organizers.

It is not fair that only younger people have to fight for environmental sustainability, said organizer Susan Gage. We want to show that we, as elders, stand by the side of these brave young people trying to uncover the madness of mowing these ancient trees and the unique temperate rainforest ecosystem that these mother trees sustain, ”she said.

Tuesday was the busiest day yet for the RCMP, which are enforcing the Teal-Jones Group’s court-ordered logging rights to Tree Farm License 46.

As of May 22, the RCMP has arrested 53 people – 46 for disobeying the court for violating the court order and seven for obstruction.

By mid-morning, five people had been arrested at Braden Camp in the Port Renfrew area. And at least 10 protesters have been arrested at a northern checkpoint on McClure Forest Service Road where the RCMP is restricting access.

“I know there were at least that many today,” said RCMP Sgt. Chris Manseau. “There were more arrests today than we had definitely planned and in a different area than we had planned.”

CHEK News reported that 30 protesters were arrested on Caycuse Main Street, possibly the highest number of daily arrests to date.

If the execution is due, the RCMP will invite the media to allow reporters to witness the arrests.

“Some protesters who are involved in journalists have access to my e-mail. They knew where we were going and they were going somewhere else, ”said Manseau. “You want to slow down the industry, but we are prepared for it. We know this will not be resolved overnight, but we will move on. “

The record of Victoria COVID publicity websites provides greater than a dozen new areas, together with Woolworths and Barber in Caroline Springs