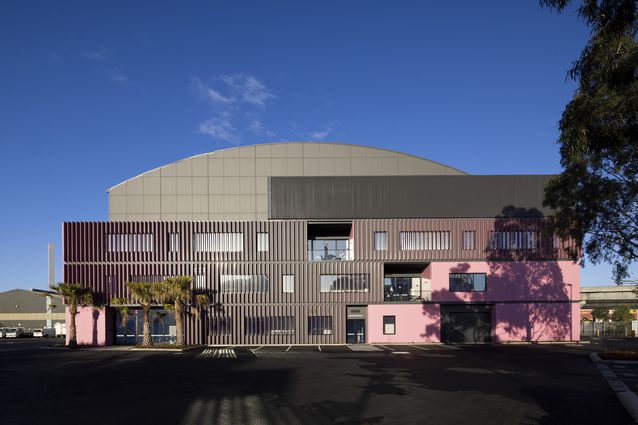 Grimshaw Architects has completed a purpose-built facility for film and television production for Docklands Studios Melbourne in collaboration with Development Victoria.

Sound Stage 6 is a development set to invigorate Victoria’s screen industry and attract international productions to the complex.

Measuring at 3,700 square metres, featuring 600 tonnes of steel girders and valued at $46 million, Sound Stage 6 will increase Dockland Studios Melbourne’s capacity by 60 per cent, making it one of the largest of its kind in the southern hemisphere.

Grimshaw principal Jason Embley described the project as a “satisfying challenge,” posing particularities to the architects from acoustic considerations to the specialized load bearing conditions.

600 tonnes of steel girders were lifted into place to form the shell of the new 3700 square meter sound stage.

The facility includes an epic clear-span space with a 17-metre-high gantry and the deepest “wet stage” in the country – a 900,000 liter purpose-built tank for shooting underwater scenes.

The design and form of the sound stage corresponds with the existing stages of the complex and the identity of the precicnt, but Studio 6 supersedes its siblings in scale and expression.

The architect said the featured colors of the building were inspired by Andy Warhol’s celebrated artwork of the 1950s screen icon Marilyn Monroe.

Recently-retired Docklands Studio Melbourne chief executive Rod Allan oversaw the design process on behalf of the studio. He attributed the success of the delivery of the highly technical project, which sits on a challenging site, to the working relationship between the architect, the studio and its government partner.

“Through ingenuity and diligence, Grimshaw satisfied all aspects of the brief and delivered a stage that will be used by Australian and international film and television, and enhance the development of Melbourne’s screen industry,” Alan said.

Studio 6 is adaptable to facilitate large-scale international productions and small independent Australian productions alike. Robbie Williams’s biopic Better Man is set to be the first production to shoot at the new facility, with filming to begin in 2022.

“With some of the best production staff and talent in the world, epic shooting locations and now the addition of Sound Stage 6, Victoria is a creative beacon for the biggest film and television projects at a global scale,” said Victoria’s creative industries minister Danny Pearson said at the studio’s opening.

Employees flock to Victoria amid stress on state’s healthcare system

Victoria’s structure steeped in historical past