Opinion: Victoria’s fleeting households are a product of our housing choices 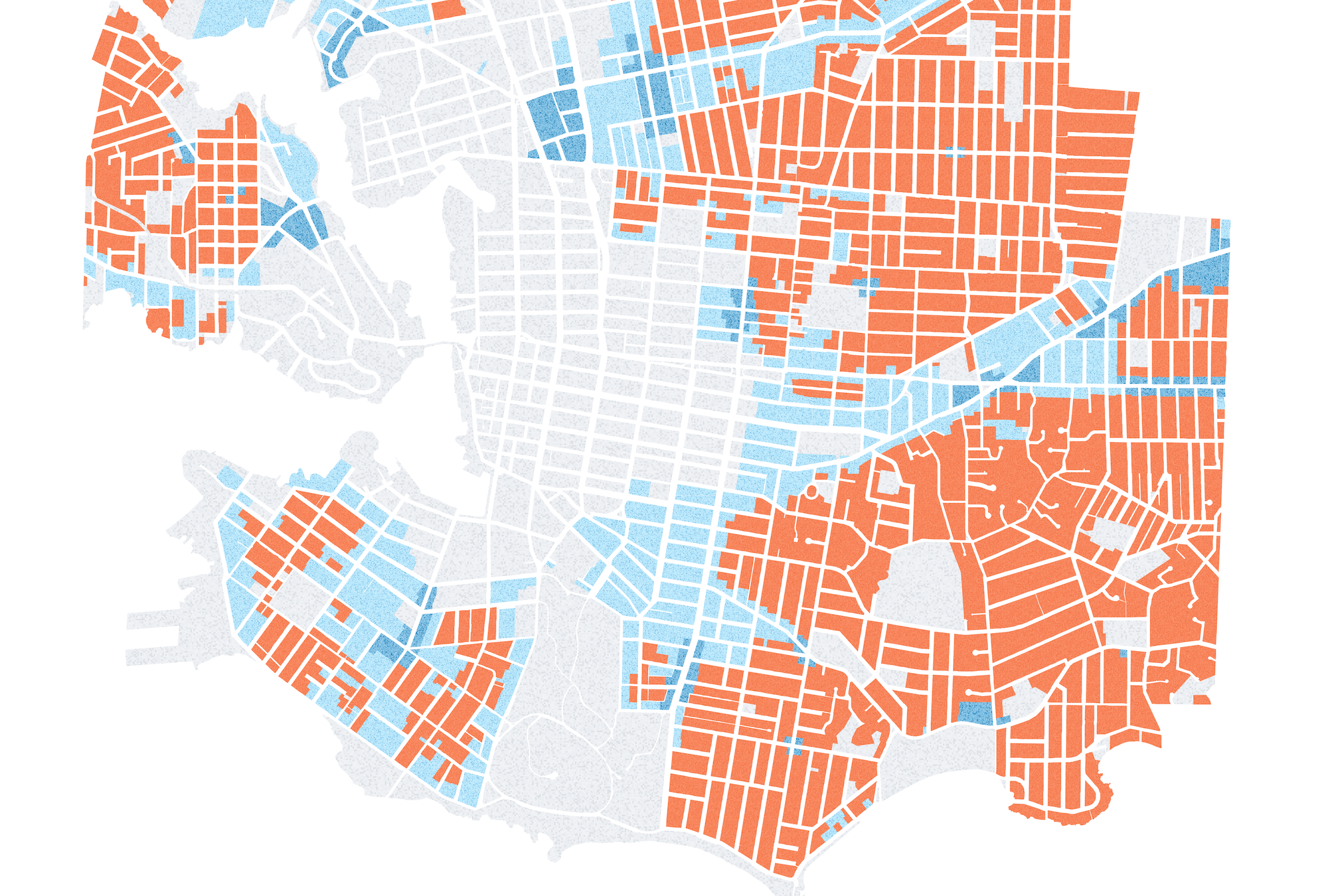 This week Victoria City Council will be deliberating a policy reform that would seek to increase housing choices in “traditional residential neighbourhoods.” These new housing forms—referred to as the “missing middle”—are the housing types in between single-family homes and high-rise apartments. It’s an apt name for two reasons: first, these housing forms currently represent less than 10% of Victoria’s housing stock, and second, it’s currently illegal to build them on 67% of Victoria’s residential land. 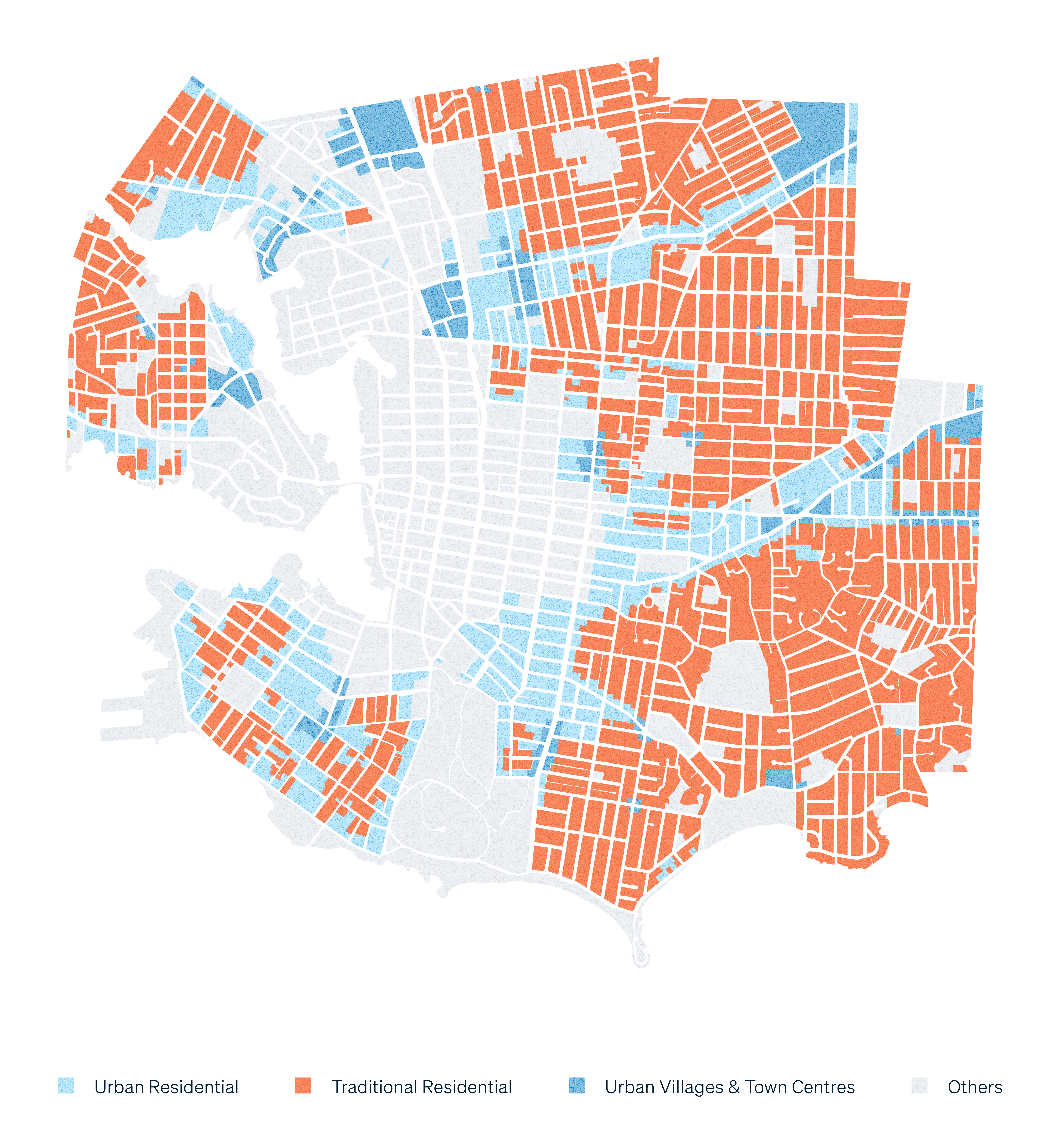 It wasn’t always this way. Our neighborhoods used to be an eclectic mix of housing types and tenures connected to various parts of town through the electric streetcar—an ode to what planners aspire to nowadays with the “15-minute city” concept. We see relics of this network and housing diversity at the corners of May Street and Linden Avenue, “The Wavell” on Hollywood Crescent, and even our own office at Fairfield Road and Irving Road, which is a legacy commercial hub to service the streetcar turnaround that was once located at Margaret Jenkins School. Then suddenly in 1982, there was a sweeping down zone of these areas to restrict housing to only permit single-family homes.

So what’s the problem? These traditional residential neighborhoods make up two thirds of Victoria’s residential land base but have only absorbed an average annual growth rate of 0.2% dating back to 1971 (that’s not a typo). Meanwhile, other parts of the region—and other Victoria neighborhoods—have seen double-digit annual population growth rates. Even more concerning is that because 67% of the traditional residential land base is restricted to single-family dwellings, these areas only accommodate 24% of all households in Victoria. In a city where 60% of households are renters and 86% of these renters live in multi-family housing, we are essentially saying that the vast majority of the city is off-limits to more than 25,000 households.

If planning frameworks are democratic and represent the will of the people, one would think that there is broad support for the preservation of these single-family areas. Well, if you have been following housing reforms, locally, nationally and internationally, you may want to reconsider that assumption.

Countless surveys related to broad policy reforms across North American cities—both locally in Victoria and further abroad—indicate strong support for densification. An incredible 92% of respondents to the Missing Middle Housing Project study agreed that Victoria’s neighborhoods should have more housing diversity. Similar community sentiments were found in Edmonton, Minneapolis, Berkeley, Cambridge, Portland and Spokane where they are implementing zoning reform to help with housing choice, affordability, and sustainability by way of efficient and compact communities.

On top of this proven support for densification of our established neighborhoods, there exists a moral and practical obligation to ensure the next generation inherits a healthy and sustainable urban environment. Data clearly shows Victoria’s neighborhoods only experience an increase in the number of children when net new housing is built. In other words, all areas where housing may already exist, but isn’t being added—or isn’t zoned to do so, like traditional residential neighborhoods—have a net loss of children year-over-year. In turn, neighborhoods gaining the most children are where we permit the most new homes to be built; which in our context is low-density suburban sprawl. This type of development has been proven to have detrimental effects on both the planet and human health outcomes. Not everyone can or will want to live in the city, but for the sake of our future generations, we need to ensure we limit this encroachment into our wild spaces and forests.

To give an idea of ​​how dramatic this gulf in child-density really is, we can see from the most recent census data that while Victoria had strong, above-average population growth, Gonzales and Rockland—the two neighborhoods with the fewest new homes added in the city—actually lost 40 children compared to the previous census. Looking at it another way, we can compare housing construction to the net number of children added to get a “child-generation efficiency score”: ie, the number of new homes it takes to add one child to a neighborhood. Low-density development on the Westshore typically generates one child for approximately every 2 homes built. Development in the urban core, however, is much less efficient, with new construction downtown resulting in one child added for every 12.7 units built, and all nearby neighborhoods sitting in a similar range. If we can agree that we should be working towards a less car-dependent and ecologically harmful future, these are some key metrics showing us that we’re moving in the wrong direction. 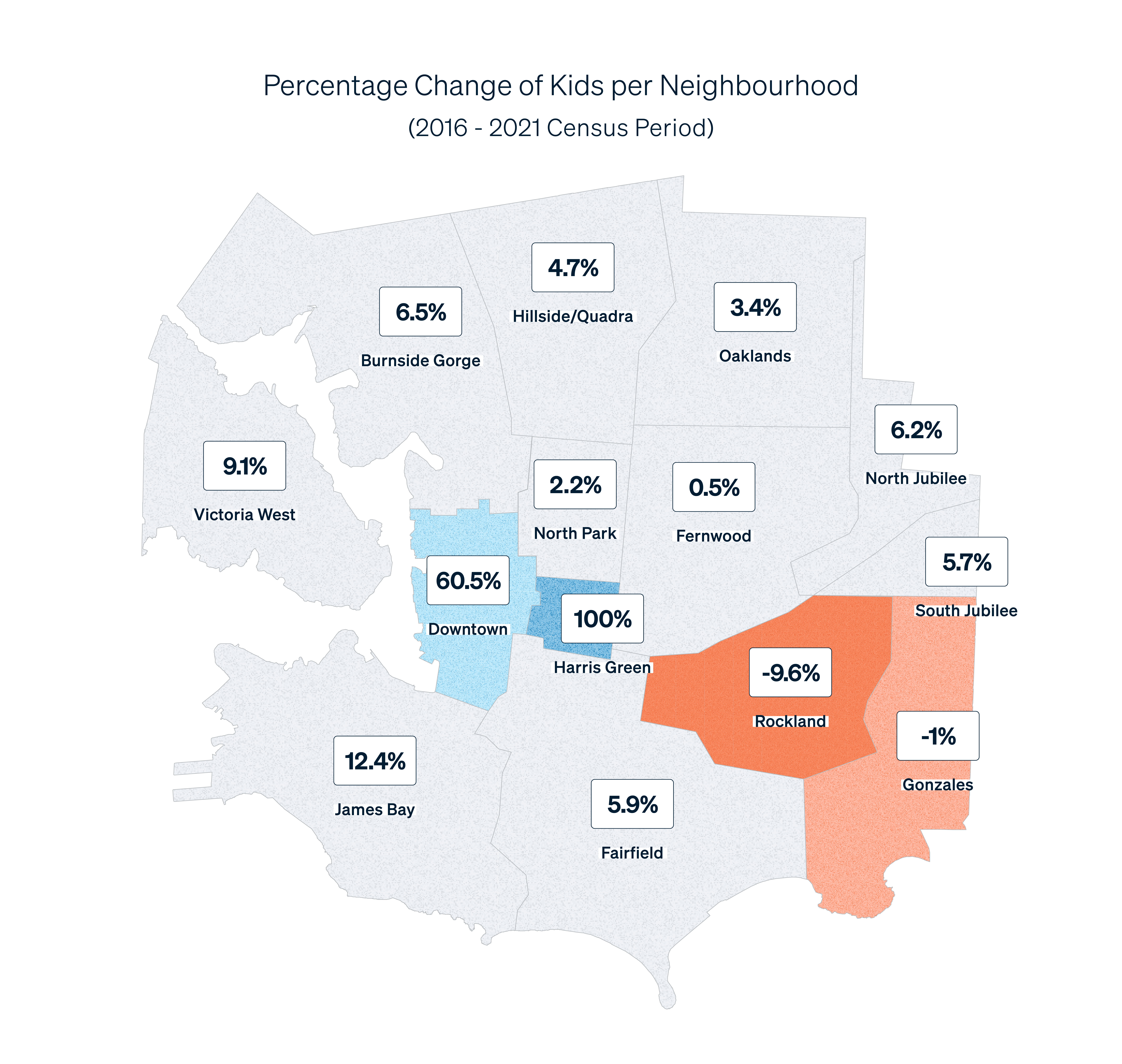 Now, of course dwelling type does play a role: the fact that many of the homes being built in sprawling areas are simply roomier for families can be credited with at least some of the disparity, along with myriad other factors, including cultural norms and perceived affordability. Unsurprisingly, areas that are primarily experiencing high-rise development add the least children per unit of housing. Downtown and Harris Green high-rise housing generated a 12.7 and 20 dwellings per child ratio, respectively. However, if we look closer, the data also gives us hope in our quest to stem this attrition of youth all headed to the exurbs; the nuance in the numbers tell us that drastic improvement on these scores is possible without moving to single-family construction.

If we look at upper Johnson Street, where there have been a few low-rise developments in recent years, we get to seven dwellings per child; Quadra Village, with a number of new low- and mid-rise buildings reaches the near-Colwood score of 3.3 dwellings per child; and where Fernwood Road meets Fort Street, 63 dwellings added 50 children for a ratio of 1.26—the highest in the region. It’s fair to say, then, that families do want to live in the city, but we need the right type of housing constructed close to the right type of amenities in neighborhoods that are already established to support this growth. High-rise buildings are useful but they are also a symptom of the “grand bargain” whereby traditional neighborhoods have been left alone while our population continues to grow. This means most of our historical housing needs have been met with Downtown or post-industrial land development, which is often very high density, as opposed to a gentle-density solution that is more sustainable and supports a higher dwelling-to-child ratio.

Most importantly, if we look at how much land it takes to “generate a child”—the actual efficiency of how we are using this scarce resource—the picture is even clearer. Land use in the core is twice as efficient, with 2 children per hectare compared to Colwood’s 1 child per hectare, producing a knock-on effect of ⅔ lower car ownership rates with less distance between homes, businesses, and schools. This fact is key in our fight against climate change because how we construct our buildings and how we move through our cities are the two largest contributors to greenhouse gas emissions. As the data has demonstrated, to keep our neighborhood character(s)—both the people and building forms—Missing Middle housing is the answer. 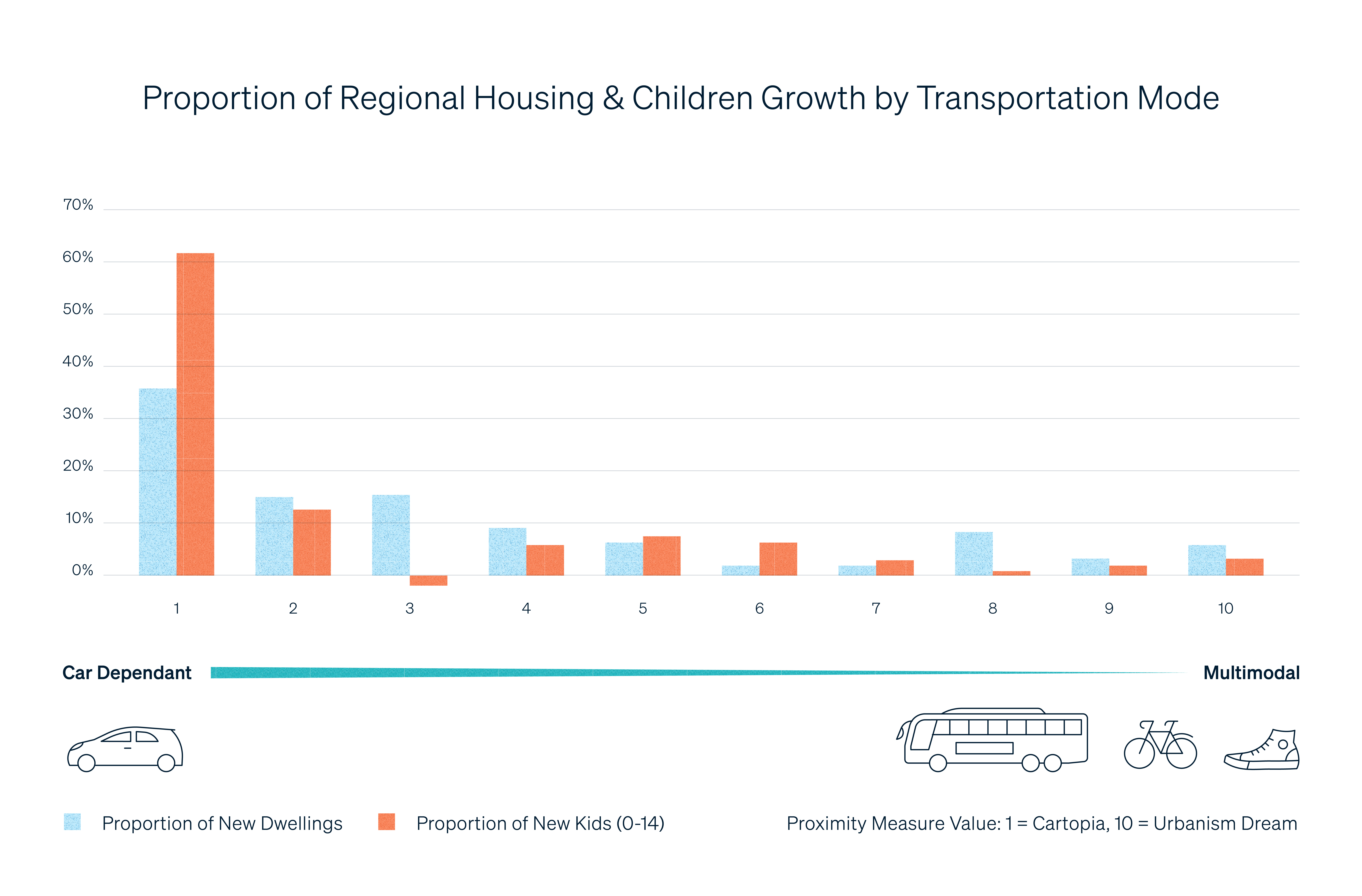 All combined, this data shines a light on exactly why the Missing Middle housing discussion is so critical. If we continue to concentrate new housing in only freshly clear-cut forested areas far from town or in high-rise developments in the city centre, we can expect the trend of declining families to continue. We can follow the lead of cities such as Charlotte, Portland and Berkeley, and remove the constraints that are causing families to leave and neighborhoods to stagnate. A simple, depoliticized process for creating diverse forms of medium-density homes in the heart of established neighborhoods is absolutely necessary to ensure the diversity, vibrancy and beauty that drew us all to Victoria in the first place. After all, what is a city without its people?

Let’s allow culture and the local economy to flourish, and let’s do it by welcoming change with an open door. Odds are, your neighbors agree.

Luke Mari is an urban planner, land economist and Principal at Aryze Developments. He also serves on the CMHC Missing Middle Housing Innovation Lab, CRD Regional Housing Advisory Committee and Board of Directors for the Greater Victoria Housing Society

Queen Victoria and her relationship with Hull showcased at new exhibition