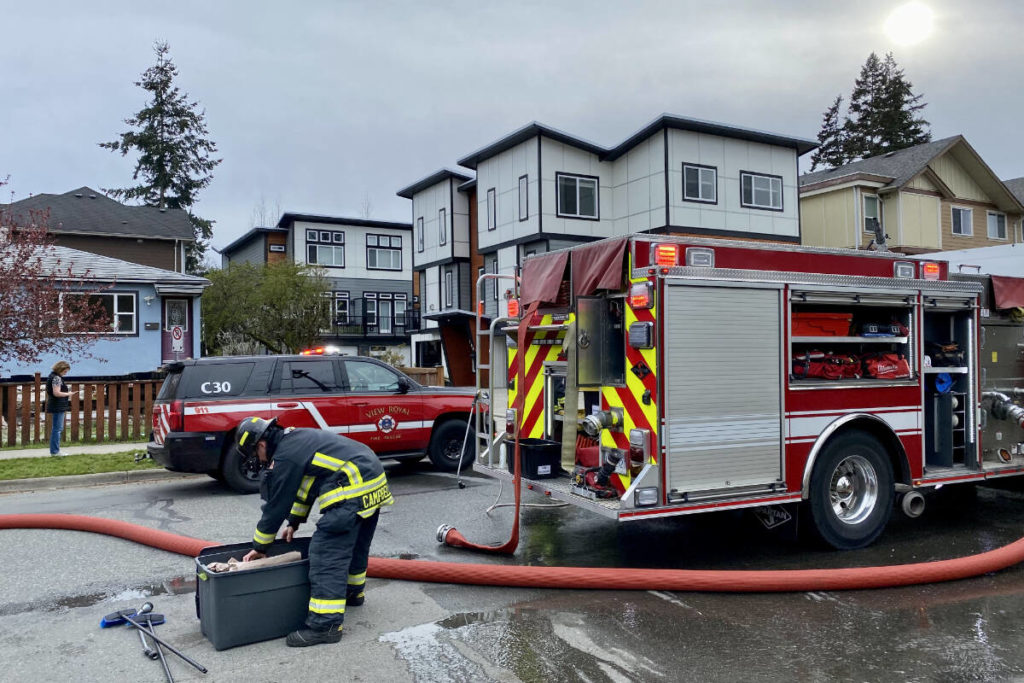 West Shore fire crews were kept busy Saturday evening with a townhome fire in Langford which claimed the life of a family pet.

Langford Fire Rescue Chief Chris Aubrey said at the scene the call came in around 5:30 pm for a multi-family residence on fire on Arncote Avenue.

“It’s right down the street from our fire station so right away we realized there was visible smoke and (once on the scene saw) flame coming from the second floor and up into the third floor,” said Aubrey.

He said crews quickly called for reinforcements, with more than 30 firefighters from Langford, Colwood and View Royal responding.

Crews were able to quickly extinguish the fire on the outside of the building, but Aubrey said they had to force their way into the home to fight the fire inside.

“Unfortunately, in the fire there was the loss of a family pet, which is obviously very tragic for the family, but no one else was home at the time and there were no other injuries.”

Aubrey said one Colwood firefighter was taken to hospital with a minor injury to be checked out.

The unit was heavily damaged in the fire, and its residents are being aided by Langford’s Emergency Support Services to find temporary housing.

Neighboring town homes were not damaged in the blaze, and their residents will be able to return to their homes pending inspections by Fortis and BC Hydro.

“We had the fire under control in the first 15 minutes,” said Aubrey. “A lot of hard work by the firefighters to contain this fire to the one unit and not have it spread, and fortunately they were able to do that. This could have been quite the fire had it gotten into the other units.”

He said the cause of the fire remains under investigation, but there were no obvious indications it was suspicious.