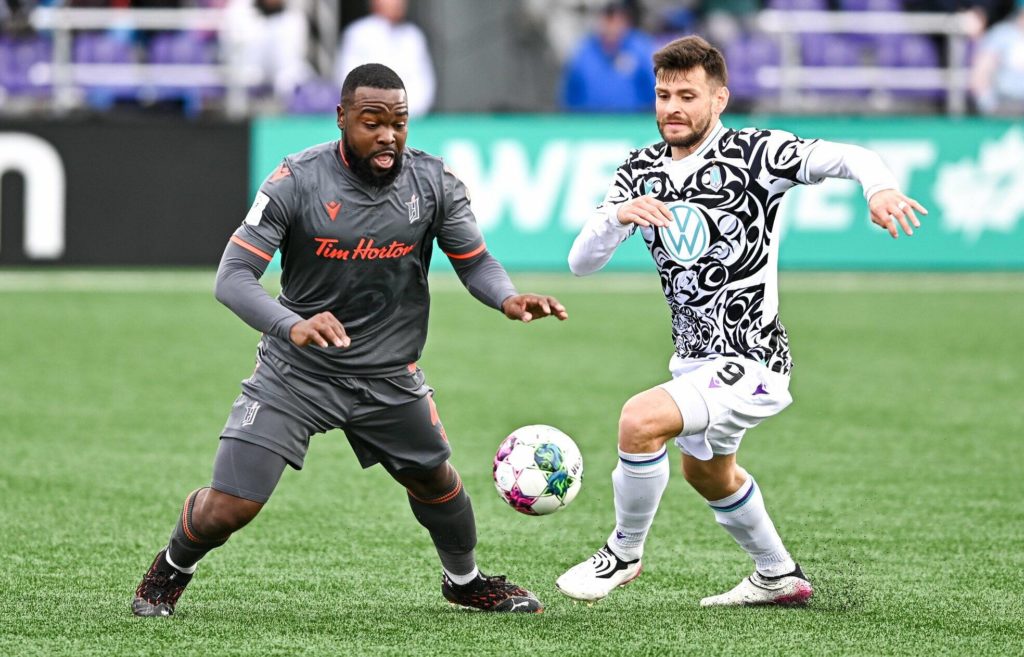 Pacific FC returned victorious to Starlight Stadium for the first time this year, in a rematch of the 2021 Canadian Premier League Final against Hamilton-based Forge FC.

Goals from Alejandro Diaz and debutant Amer Didic allowed PFC to hold on through a late scare, to win the game 2-1.

Over 4,000 boisterous supporters were in the stands to see the team’s first game back, including Blake McStravick, who’s a member of the Lake Side Buoys, a supporters club for PFC – who also saw the team’s last game when they played in the CPL final in Hamilton.

“It is the best sporting atmosphere in Victoria, bar none.”

The day started great for the locals, Diaz cooly from Josh Heard’s ball across the box to make the score 1-0 after just five minutes.

Forge FC probably had the better performance on balance, but it was the home team who scored the second goal, Marco Bustos swinging in the cross from a free-kick on the right, and Didic rising highest to head home from close range.

It was a tense final few minutes when Forge FC pulled one back, Pacific FC losing focus from a corner allowing Forge’s Alexander Börje Achinioti-Jonsson to steal in and head home, to make the score 2-1 in 88 minutes. Pacific ultimately held out, to start the season strong.

There were faces new and old on the field and in the dugout, with this being Pacific FC’s coach James Merriman’s first game in charge of the team. New PFC defenders Didic and Nathan Mavila made their debuts for the team.

Familiar faces were sitting on the opposition bench, with championship-winning team members Terran Campbell and Alessandro Hojarbpour lining up for Forge FC, and being greeted with boos by some in the stands.

Pacific FC was wearing their new alternate jersey, designed by Coast Salish artist Maynard Johnny Jr. The artist’s traditional name is Thii Hayqwtun, meaning big or huge fire. The jersey depicted a salmon and a child’s face on the jersey.

Twenty dollars from the proceeds of the jersey sales are going to the artist’s charity of choice, and $5,000 worth of the artist’s time will benefit Hope and Health’s Youth Champion Program.