Princess Victoria of Sweden and Prince Daniel go to London 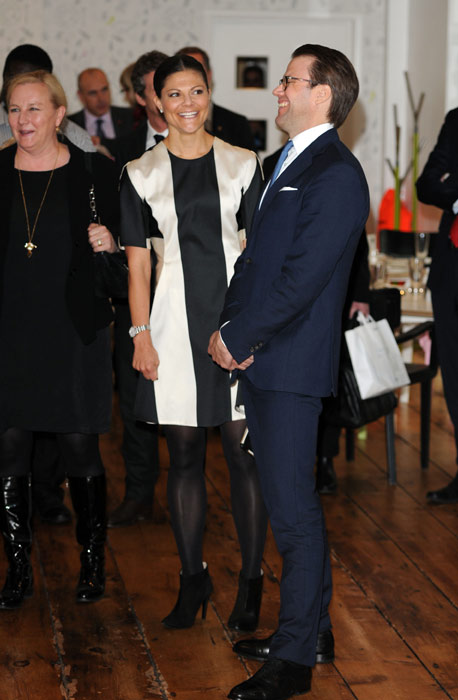 
Princess Victoria of Sweden and her husband Prince Daniel wowed viewers in east London on Thursday when they paid an official visit to Hackney Community College.

Princess Victoria of Sweden and her husband Prince Daniel everyone smiled as they were greeted by a crowd in East London on Thursday as they officially attended Hackney Community College. It was the second royal visit to the college in two days – just as the Duke of York had visited just the day before.

The Swedish royals are on a two-day trip to London that includes a meeting with the mayor Boris Johnson and a visit to Cambridge. Wearing a trendy monochrome dress with her hair combed back in a bun, the elegant princess was in a good mood and shared a joke with her husband.

This is the first time Victoria has been seen in the British capital in some time – she has moved away from visiting the London Olympic Games 2012 Spending time with her baby Estelle.

Victoria’s visit comes the same week as her younger sister Madeleine has revealed that she is expecting a baby. Victoria will no doubt share motherhood tips that she describes as “awesome, wonderful feeling”.

The official trip was intended to strengthen economic ties between Great Britain and Sweden. Swedish Trade Minister Ewa Bjorling joined the couple. They enjoyed lunch at Level 39 in Canary Wharf, which is in the heart of what is known as Tech City. “Fantastic lunch,” said a fellow guest. “Great discussions about innovation, creativity and entrepreneurship.”

Ewa Bjorling said: “The creative and digital connections between Sweden and the UK are becoming increasingly important in a globalized economy with fierce competition for talent. We share an interest in improving the networks that connect our countries to support our creative industries. ”