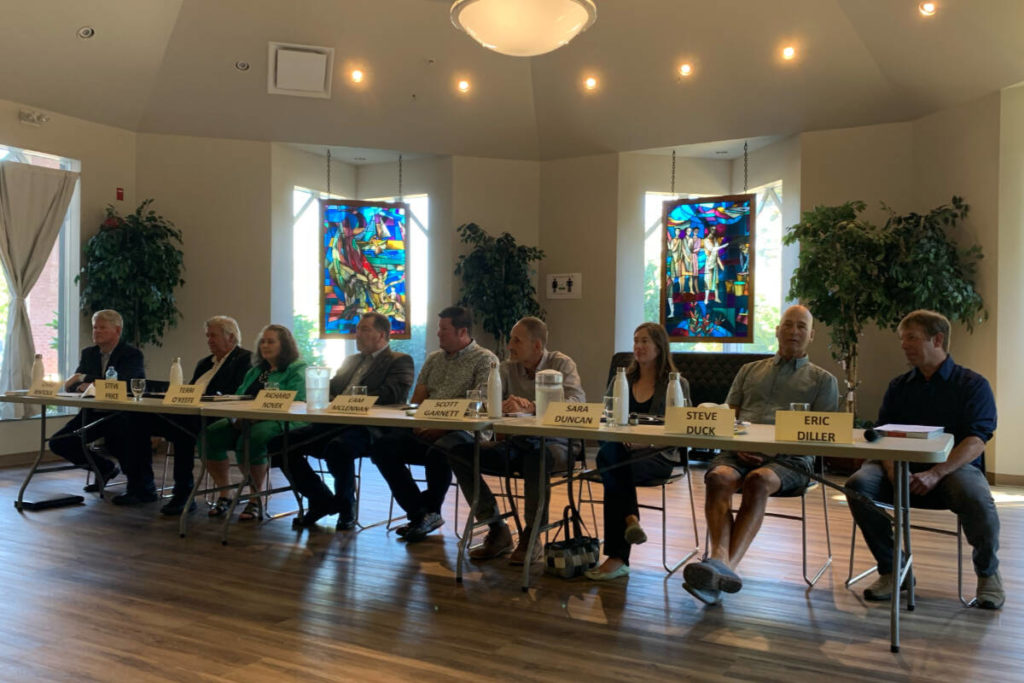 An all-candidates meeting Sunday revealed broad agreement among Sidney councilor candidates on the need to deepen environmental protection through cooperation with local environmental groups and neighboring municipalities and increase housing through measures such as co-ops, alternative housing options (like secondary suites) and enforcement of short-term rental, among other options.

But candidates revealed differences on the subject of public engagement with the process around the Amazon building receiving criticism.

Perhaps the biggest differences among the candidates appeared when Carlsen asked them how they would ensure that developers undertake “adequate community consultations” prior to a development application advancing to council. Carlsen pointed out earlier that Sidney’s current development review process does not specifically require applicants consult with adjacent neighbors prior to submitting an application. “This often results in neighbors being unaware of development proposals until they receive formal notification,” he said.

Sidney’s new Official Community Plan includes language that encourages developers to hold public information meetings to consult with residents and stakeholders that would be affected by a development proposal before submitting a development application.

Garnett said he preferred language that would ensure developers hold such meetings. “But I’m not sure around the legalities in terms of private property if we can, but if we could that would be my preference,” he said. Sidney’s committee-of-the-whole meetings afford residents the chance to ask developers questions and the municipality has increased signage and mail-outs, he added. Developers, he said, are listening. “But where it didn’t work was Amazon,” he said. The Galaran Road neighborhood had to find out about the proposal through the media, causing much angst, noted Garnett.

Duncan, Garnett’s colleague on council, disagreed. “I wouldn’t ensure it,” she said. “I like the wording as it is (in the OCP) because this is a matter of social license.” Duncan said her past experience shows that such mandatory meetings are not a measure of whether developers would be good neighbors. She said that she would like to be able to tell the difference between those who just want to make a quick buck and those who want to talk to the community first.

Rintoul favored the current language, but also expressed support for letting the public and council’s committee-of-the-whole get a look at the detailed report that staff generally prepare for the municipality’s advisory planning commission after developers had presented to the committee-of- the whole.

O’Keeffe also spoke in favor of the current language and said developers have already started to be more mindful of public concerns. “They have acted on it,” she said. “They have been going to residents first.”

McLennan, who previously sat on a council often accused of not listening to the public, praised the current council for including that language, while Novek suggested it didn’t go far enough.

While Novek agreed with comments from O’Keeffe that developers increasingly ask for public feedback to avoid costly delays, many developers are indifferent toward public concerns. Novek said he would make sure that community consultations would be an integral part of the development process. “It need not be cumbersome, it need not be overwhelming, but it needs to be something that all developers do when they are applying for development projects in (Sidney).” Neighbors have to be able to look at plans and get any professional advice they need, he said.

Diller said he would establish a demographically representative body to look at developments through a housing lens. Staff would also work with an architectural firm to review development proposals and developers would be required to submit a list of detailing efforts to contact immediate and near-immediate neighbors, their questions and concerns, and any responses to them.

Former mayor Steve Price signaled support for a small OCP amendment that says developers will hold public meetings. “If you give developers clear direction, they will follow it,” he said.

Duck agreed with comments that developers are increasingly paying attention to public voices, pointing to the role of public input around the abandoned Gateway Project and more recently, Beacon Wharf.

“Residents expressed an opinion, it was heard and developers stepped away,” said Duck, former president of the Sydney Community Association. “Where we have failed is in constructions, like the Amazon construction and soon the Marriott Courtyard Hotel,” he added. Both projects would have required more engagement, he said. “We have a memorandum of understanding with (Victoria International Airport Authority) that is now 22 years old. There are more pieces of that memorandum that we can enforce and not just ask, but require the airport to meet. We didn’t do that with Amazon. We need to be more forceful in directing our developers as to how we build in our community.”

The candidates are scheduled to meet again on Thursday, Sept. 29 at the Mary Winspear Center during an all-candidates forum co-sponsored by the center and Black Press Media.