When Queen Victoria’s extraordinarily large bloomers were auctioned in 2015, the world reacted with a mixture of curiosity and horror. How could a woman who weighed in at a mere 7th on her wedding day have ended up filling such generously proportioned underwear? The answer, of course, read in the 19th-century monarch’s diet – revealed for the first time in the bluntly named book The Greedy Queen by food historian Annie Gray.

Born “plump as a partridge” in 1819 the young Victoria was brought up on bread and milk and other bland fare, which goes some way to explaining why her waistline was 50in by the time she died in 1901 at the age of 81.

When she came to the throne aged 18, the 5ft 1in sovereign made it her mission to “eat like a Queen”, feasting on delights such as lamb cutlets, fillet of turbot, jelly and ice cream with inevitable consequences.

As a younger woman, she obsessed about her weight, once asking her best friend, the prime minister Lord Melbourne, whether she looked fat, to which he advised her to only eat when she was hungry. “But I am hungry all day,” the 9st 2lb teenager replied.

Victoria lost more than 2st for her wedding to Prince Albert in 1840, maintaining her weight despite giving birth to nine children in 17 years.

But it was when her darling husband died in 1861 that a then middle-aged Victoria started comfort-eating.

It certainly didn’t help that the Queen had a tendency to bolt down her food (despite suffering from chronic indigestion and, in later years, irritable bowel syndrome that caused flatulence).

Court etiquette dictated that Victoria would be served first and dishes would be removed as soon as she finished, leaving fellow diners to race through the various courses.

As one guest commented: “The Queen ate everything, even cheese and a pear after dinner. No courses: dinner is served straight on, and when you finish one dish you get the next, without a pause for breath.”

The first official royal dinner of Queen Victoria’s reign, which took place at Buckingham Palace on July 13, 1837, gave some indication of the scale of culinary offerings at court.

The French menu consisted of a soup first course followed by fish: red trout, dory, whiting and sole. Then came the “removes”: beef steaks, braised capon, roast lamb and baby chickens. Next up were the “entrées”: lamb cutlets, fillets of sole, four different chicken dishes, sweetbreads and pâtés à la Reine or puff pastry pies. All this before the main course of roast quail was even served, followed by a second set of “removes” consisting of German sausage, soufflé and omelette. Then came “entremets” of lobster salad, fricassée with jelly, garden peas and artichokes, before dessert was served.

The great gastronomic change of Victoria’s 64-year reign was from service à la Française, whereby all the dishes were presented simultaneously, to the modern sequential à la Russe, which was “probably adopted in the 1870s”, according to Gray. Regardless of which method was employed behind palace gates, Victoria’s appetite remained unaffected.

The author notes: “Whether served à la Francaise, à la Russe or somewhere in the middle, diners at the Queen’s table could choose from gargantuan amounts of food.”

Clothed in black, the widow Queen gained weight rapidly, prompting the Foreign Secretary to comment in 1888 that she was “well but growing enormously fat”.

Of course the heavily staffed royal kitchens at Buckingham Palace and Windsor Castle didn’t just supply food to the Queen and her family but to hundreds of household staff and all sorts of hangers-on. In 1841 alone, 113,000 people sat down at the royal table.

In October 1842 up to 90 loaves of bread per day were consumed by the establishment, along with 36lbs of butter per day and more than 800lbs of Cheshire cheese that month.

Diabetes-inducing amounts of sugar, almonds, cocoa, sultanas and raisins were ordered on a regular basis along with huge bars of Fry’s chocolate. Indeed, the Queen would even have confectionery sent to her on her travels.

Victoria developed a taste for Scotch while at Balmoral and picnics became a way of life, with the Queen insisting she be accompanied at all times by a hamper full of tea and cake (which she outrageously used to dip in her coffee and tea). In October 1861 she was horrified to find that “there was hardly anything to eat, and there was only tea and two miserable starved Highland chickens, without any potatoes! No pudding and no fun.” Of local delicacies, Victoria wrote that she thought oatmeal porridge “very good”, adding that she tried haggis and liked it “very much”.

Always one to try something new, she ate bustard, ostrich eggs and turtle after becoming Empress of India in 1877. She loved curry (although, contrary to popular myth, she never ate it for breakfast, preferring eggs and bacon). 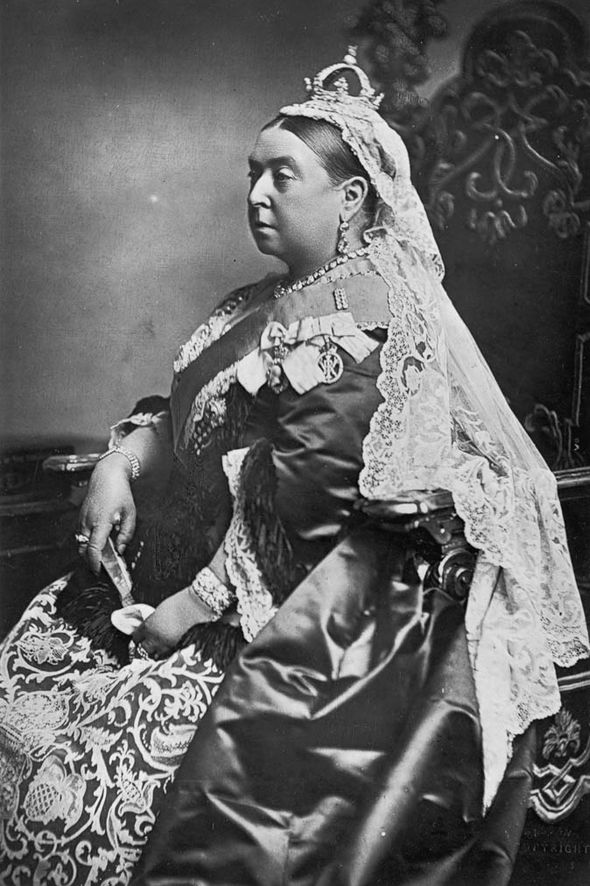 Even into her 70s, Victoria was eating six-course meals

Having been brought up eating Anglo-Indian curries she developed a taste for spicier fare, remarking in her journal in 1877: “We had some excellent curry, made by one of my Indian servants.”

Even into her 70s, Victoria was eating six-course meals. In 1897, the Aga Khan wrote of an audience with the Queen: “The dinner was long and elaborate – course after course – three or four choices of meat, a hot pudding and an iced pudding, a savory and all kinds of hothouse fruit – slow and stately in its serving.

“We sat down at a quarter past nine and it must have been a quarter to 11 before it was all over. The Queen, in spite of her age, ate and drank heartily – every kind of wine that was offered, and every course, including both the hot and the iced pudding.”

Perhaps it was only fitting that upon her death at Osborne House, her country retreat on the Isle of Wight, the Queen was laid out in the dining room.

As Gray notes: “Her greed for food reflected a wider appetite for life. She embraced, wholeheartedly, all that the world had to offer her to eat, for all her life, and for that she deserves respect.”

l The Greedy Queen, Eating With Victoria, by Annie Gray, is published by Profile Books, priced £16.99.

Hazmat crews known as to Retailer Road in Victoria