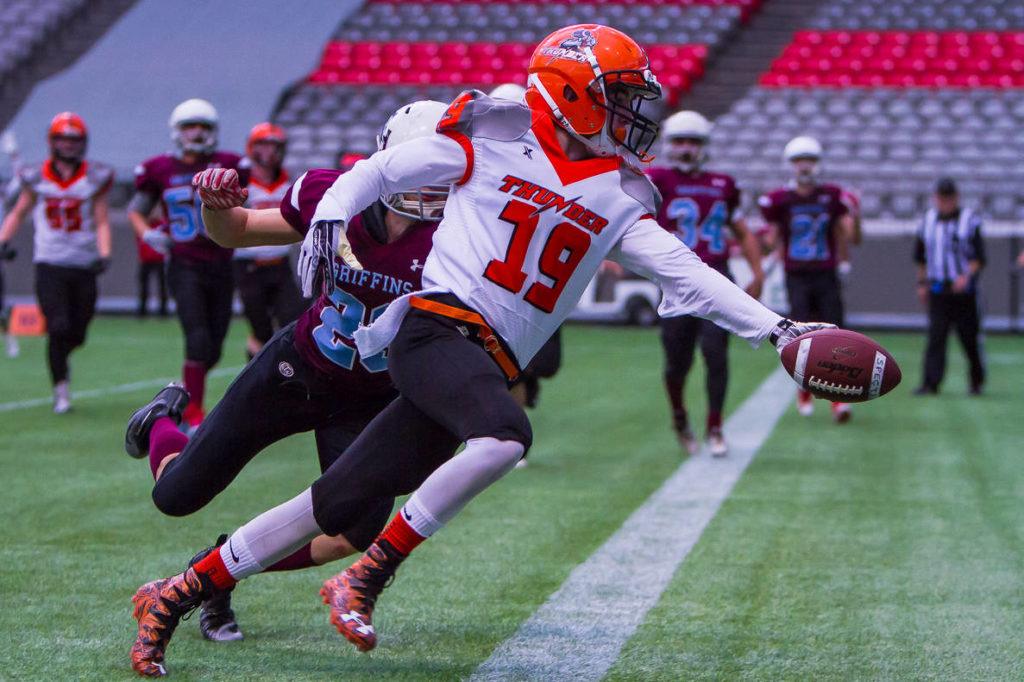 Despite the disappointment in the locker room, it’s a big step for the young Spectrum program, which has now played five seasons.

“It’s been a good run, it’s great for the team and also for Spectrum athletics,” said head coach Darren Vaux.

It was all part of a big week for the team that beat the Frank Hurt Hornets 28-12 eight days earlier to secure Spectrum’s first trip to the Tier 2 finals.

Oh so close. Eric Hamber28; Spectrum Thunder 21. Very proud of the team. You played hard and represented the school so incredibly well. pic.twitter.com/19LEkBWm29

On Thursday, Spectrum hosted a pep rally to spice things up the soccer team, including a performance by the Spectrum band.

“It’s great for the school, the culture within the school is changing as the football team gets better known,” said Vaux.

The Thunder laid over on Friday and stayed in a hotel near the stadium. The night before, the team took a rainy walk around the stadium, knowing they had to be at BC Place at 9.30am for kick-off.

“It was a nice moment, we discussed all the things that were to be expected, what was to come,” said Vaux.

The Thunder held a 14-7 in half but lost the game in the third quarter when the Griffins scored two touchdowns and took control of the game offensively.

“Our defenses are exhausted,” said Vaux.

The game started off right when Thunder’s Harrison Kuromi intercepted the ball in defense and scored a 7-7 tie. Running back Brandon Robbins rushed for a touchdown and receiver Riley Wilson ran in a reception for the other score.

With 28-21, the Thunder successfully lost an onside kick in the last few minutes, but could not take another shot on goal.

“Overall it was a disappointment, we didn’t take this team for granted, but I don’t think we played our best game, our best players weren’t our best,” said Vaux. “We couldn’t get our running game going and our other strength, our defense, had problems all day.”

Star player Riley Wilson returned from a five-week injury hiatus with a severed shoulder. He scored a TD but was unable to defend.

With Wilson graduating this summer, the Thunder are in good shape as quarterbacks Cam Ross and Chris Starck are set to return in 2018.