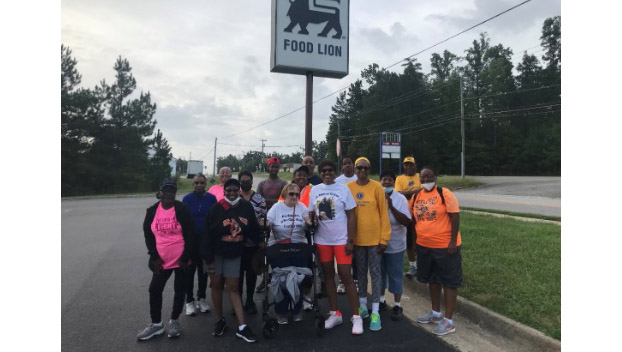 Walk-a-Thon a success for Lions Club

In September of 2005, Ken Saunders took a walk. The Lunenburg County resident, who was legally blind, made the trip along with other members of the local Lions Club from the Victoria Food Lion to Shoppers Value in Kenbridge. He did it as a fundraiser, to raise money and awareness of projects to help the blind.

Since 2005, the Kenbridge Victoria Lions Club has made this an annual event. Saunders himself walked in it until his death in 2017, at which point the club renamed the project in his honor. Now each year in September, club members make that same walk as part of the Ken Saunder Memorial Walk-a-thon.

This year, it happened on Saturday, September 10. Sixteen walkers made the trip and the club will use money raised to fund community projects. The Lions Club is unique as a service club in that the members support the club with dues so that 100% of any money collected from the public goes back to the public in some way. The motto of the Lions Club is “We Serve.” If you would like to contribute to the Lions Club or become a member, contact the Club President, Bonnie Alston at (434) 696-3557.