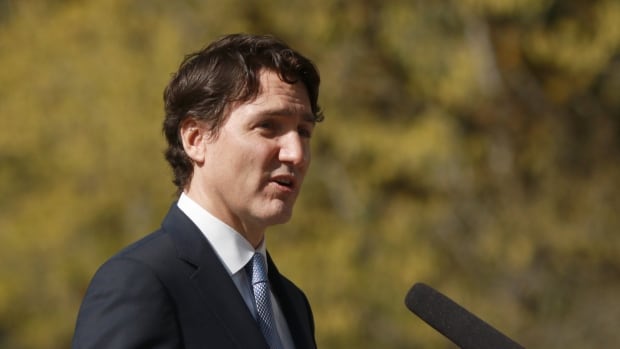 Prime Minister Justin Trudeau touted the benefits of the latest federal budget on Monday, highlighting spending on infrastructure for electric vehicles during a visit to Victoria.

The federal budget tabled last week placed a heavy emphasis on transitioning to the green economy, with new investments in critical minerals and metals, expanding the availability of zero-emission vehicles and charging stations.

Speaking Monday morning from a parking lot at Royal Roads University, the prime minister reiterated the promises made in the budget — including a new emissions reduction plan and extension for purchase rebates.

The 2022 federal budget promises to extend the $5,000 purchase rebate on electric vehicles another three years and adds $900 million in incentives and grants to build more charging stations.

“We know that electric vehicles are more expensive up front, even if over the long term they turn out to be cheaper. We know people need that help up front,” Trudeau said.

The new national emissions reduction plan sets a target of one in five new cars that are sold being zero emissions by 2026. By 2030, the target is 60 per cent. That is up from the 50 per cent goal set by the Liberals less than a year ago.

Three senior cabinet ministers were also in BC and Yukon on Monday to discuss the budget.

International Development Minister Harjit Sajjan was scheduled to be in Kelowna, BC, for a clean economy announcement and Natural Resources Minister Jonathan Wilkinson was slated to travel to Whitehorse to announce a clean energy partnership with Yukon and the Indigenous-run Tlingit Homeland Energy Limited Partnership.

Federal Fisheries Minister Joyce Murray was scheduled to be in Richmond, BC, for an infrastructure announcement.