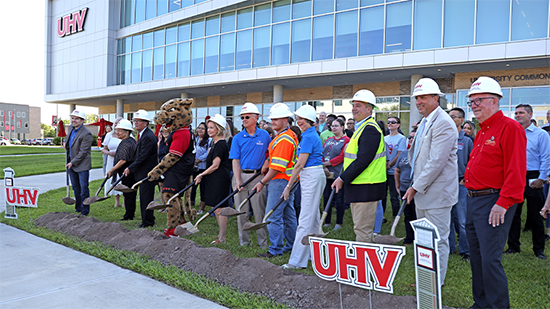 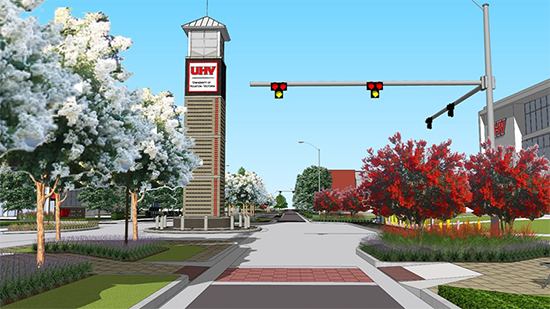 An image from a March 1 presentation to the City Council shows the proposed design for landscaping on Ben Wilson Street near the UHV campus. 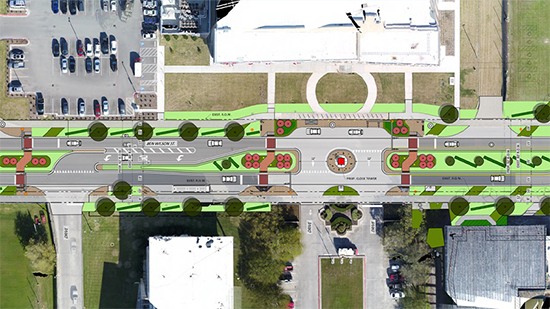 An image from a March 1 presentation to the City Council shows the proposed new layout for Ben Wilson Street near the UHV campus.

Past and current leaders from the City of Victoria and the University of Houston-Victoria, community leaders and elected officials gathered June 3 to celebrate the start of the Ben Wilson Corridor Improvement Project.

These pedestrian safety improvements will allow students to move freely about the campus and give the area a consistent identity. The additional grass cover is expected to slightly improve drainage in the area.

“We are excited to see this project begin construction after all this time,” said UHV President Bob Glenn. “UHV first began discussing the Ben Wilson Corridor in 2015. Since then, it’s been a long process, and we are happy to partner with the City of Victoria.”

The project is managed by the City and funded by state bonds that will be repaid by UHV.

“The City is pleased to be able to support UHV in its goal of becoming a destination university,” said Mayor Jeff Bauknight. “A thriving university greatly benefits our local economy and raises Victoria’s profile as a regional hub for high-quality, affordable higher education. This project will establish the area as the entryway to the UHV campus and will help to sustainably manage increased foot traffic in the area.”

Before the project was approved, the City conducted numerous studies to make sure the street would still be able to handle traffic after the lane reduction.

“We looked at every type of data: traffic counts, transportation studies, current and future volumes,” said Public Works Director Ken Gill. “We’re confident that the new street will be able to meet our traffic needs now and for the next 30 years.”

The finished design will also include ample space for drivers to pull over for emergency vehicles.

On June 6, contractor crews will begin cleaning the storm sewers in preparation for drainage work. Lanes will close periodically during this time, but the road will remain open to two-way traffic.

The street is expected to be southbound only at some points during the project. The City will provide updates about upcoming lane closures.

The entire project, including the landscaping, is expected to finish in fall 2023.

To sign up to receive traffic alerts from the City of Victoria, visit www.victoriatx.gov/list.aspx.

To view studies and other information about the project, visit www.victoriatx.gov/benwilson.

The University of Houston-Victoria, located in the heart of the Coastal Bend region since 1973 in Victoria, Texas, offers courses leading to more than 80 academic programs in the schools of Arts & Sciences; business administration; and Education, Health Professions & Human Development. UHV provides face-to-face classes at its Victoria campus, as well as an instructional site in Katy, Texas, and online classes that students can take from anywhere. UHV supports the American Association of State Colleges and Universities Opportunities for All Initiative to increase awareness about state colleges and universities and the important role they have in providing a high-quality and accessible education to an increasingly diverse student population, as well as contributing to regional and state economic development.