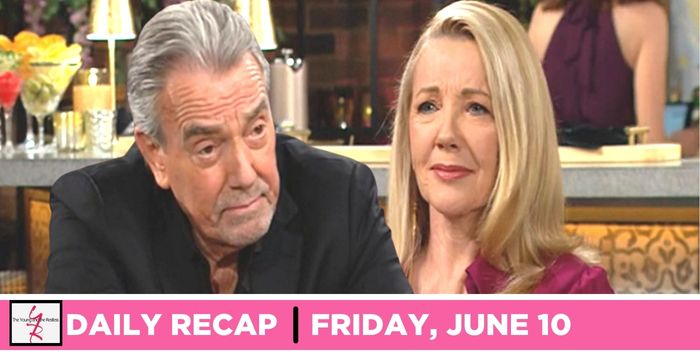 The Y&R spoilers recap for Friday, June 10, 2022, everyone worried about dear fragile Victoria Newman, as those involved with the Chancellor Winters launch prepare to celebrate their awesomeness.

Victor (Eric Braeden) and Nikki (Melody Thomas Scott) rehash everything over a meal at Society. They can’t believe their daughter is being so stubborn. Victor is mad he didn’t deck Ashland Locke (Robert Newman) when he said it was Victoria’s idea to leave town and they drove her to it. Nikki didn’t buy that. But what now? Nikki fears she’ll never forgive them and Ashland will break her. They realized they’ll have to let her go.

Not so nearly, Victor has an idea. They will always welcome her back…to the family. But Newman Enterprises will not. He will announce the new CEO is Adam Newman (Mark Grossman). Nikki stays as co-CEO. She declines, says she should go back to her old role as Chief Operating Officer so it doesn’t dilute his announcement. Victor’s impressed. Once Victoria learns about Adam, it will be too much to bear and she’ll return.

Victoria (Amelia Heinle) stands her ground with Nick Newman (Joshua Morrow), as he promises he isn’t visiting her at the office to do anything other than support her. But he still can’t stand the idea of ​​her leaving town angry at him. He’s scared he’ll never see her again and that gets to her. Only they know each other and their past. He swears he’ll love her and that will never change. They hug.

Billy Abbott (Jason Thompson) wants to get clarity on what happened last night but Lily Winters (Christel Khalil) wants to concentrate on business. She also sides with Devon Hamilton (Bryton James) against an enthusiastic Nate Hastings (Sean Dominic). He looks to Billy for support but Billy passes. The group goes to The Grand Phoenix and learns that Abby Chancellor is stepping in to help them out instead of Phyllis Summers. Um, odd. Sure.

Lily continues to accuse Billy of trying to control Victoria’s life. She told him she’s done — he has to stop talking about it. He was open to considering it, which she appreciated. But then before the launch party started, Billy left to take care of something. Lily wasn’t pleased. They met up at the office later, looking awesome, and Billy pulled out a ring box — something so she never forgets tonight — an amethyst ring to show how much he is committed to her. She loved it.

Elena Dawson (Brytni Sarpy) may be tired, but nothing will keep her from the party with Nate, no matter how much shade Imani Benedict (Leigh-Ann Rose) threw at her. Elena sized up the competition but then looked at herself, noting she works hard. At home, she got a bad news phone call. When Nate returns, she tells him she has to work but then admits that Imani got under her skin.

Amanda Sinclair (Mishael Morgan) took Imani to task for bothering Elena and then learned that Imani had a date for the big party who wasn’t Nate. But then Nate pitched what he wanted to Imani cause he was desperate to have someone agree and bingo, he found her. Amanda saw and seenthed.

The Young and the Restless (YR) airs weekdays on CBS. Check your local listings for airtimes. For more about what’s coming up in Genoa City, check out all the latest that’s been posted on Y&R spoilers, and for an in-depth look at the show’s history, click here.