A recognition and settlement agreement between the Victorian government and a group of First Nations people has been signed.

In what has been described as a new beginning, representatives of the Wotjobaluk Nations of north-west Victoria have received recognition of the devastation and destruction brought on their community by the dispossession of their people and country.

They signed a Recognition and Settlement Agreement with Attorney-General Jaclyn Symes, and a participation agreement and traditional owner land management agreement.

The agreements will build on their existing native title recognition and allow greater self-determination, as well as protection of their culture, traditional practices and relationship to country.

It falls under the Traditional Owner Settlement Act 2010, which provides a framework for financial and land management packages, and native title settlement claims.

It comes as treaty negotiations in Victoria are set to begin next year.

The land council is the registered Aboriginal party for the area between Ouyen, the South Australian border, Edenhope, the Grampians and Navarre.

It obtained native title recognition in 2005, the first one in Victoria.

Mr Clarke said the arrangement was similar to one done in Central Victoria in 2013, where the state government transferred crown lands to Dja Dja Wurrung Clans Aboriginal Corporation as Aboriginal title to be jointly managed by the state and traditional owners.

That agreement did not affect activities like hunting, fishing and other licenses already in place, and Mr Clarke said the new one wouldn’t either.

“We already have a lot of significant sites we manage under our federal native title agreements: the Ranch Billabong in Dimboola and parts of the Ebenezer mission in Antwerp,” Mr Clarke said.

He said the agreement would increase the number of sites the organization managed.

“There will be lots more cultural burns and returning natural vegetation, and there is also significant rock art in other areas, so there is other cultural heritage values ​​and surveys that will need to come from that.

“For us, it’s going to be lot more hands on management with Parks (Victoria) in terms of workers being on the ground in those areas.”

Negotiations around the Recognition and Settlement Agreement continue, with Barengi Gadjin seeking to have more areas including Wail State Forest transferred in stage two. 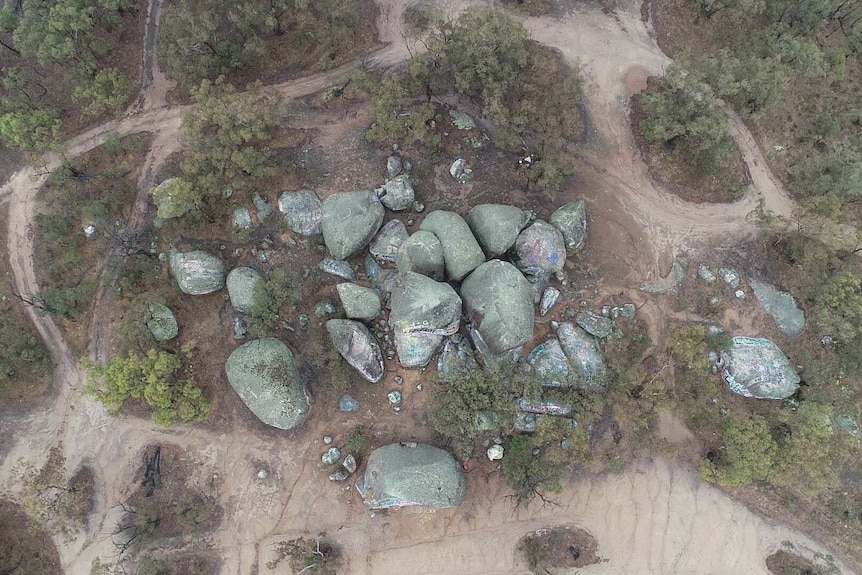 Sisters Rocks in Stawell is a natural formation that will be managed by the Barengi Gadjin land council.(ABC Ballarat: Dominic Cansdale)

Not everyone is happy

People belonging to the Wergaia First Nations group lived around the Nhill, Warracknabeal, Sea Lake and Ouyen areas, in the north of the area the agreement covered.

He said they believed they were not given sufficient opportunity to discuss the content of the agreement before it went to be authorised.

“And they don’t believe the authorization meeting was conducted in a way that enabled their interests to be fairly represented,” he said.

He said they had to attend a meeting in Horsham in order to cast a vote.

“These people come from all over Victoria, and in some cases interstate, and it was impractical for them to attend the meeting and express a view,” he said.

“But the principal objection is they ought to have been consulted a year or two ago and [helped to] develop the agreement.” Mr Shaw said the people he represented only found out about the agreement last month, and that they would like a level of autonomy to manage the lands in their area.

“The agreements in their totality extend over a very large area, and Wergaia is a significant part of the area, so their view is Wergaia people should have responsibility for Wergaia country.

“That is the issue they would like to further discuss with the government and Barengi Gadjin representatives, failing which we might end up in court, who knows?”

Mr Clarke said Barengi Gadjin Land Council ran various meetings in person and online to make sure as many traditional owners as possible, from each of the near-dozen family groups it represented, were part of the discussions.

He acknowledged there were smaller family clans of bigger nations in Barengi Gadjin’s footprint, and this “spoke to diversity of area and that it did not have borders that were laid out the way the states are”.

“We acknowledge other broader clans that also are a part of us but essentially (Wotjobaluk, Wergaia, Jupagluk, Jardwa and Jardwardjali) have been recognized under federal law under native title, and these next set of agreements we’ve negotiated also acknowledge those five clans, so we’re being consistent in making sure the nations are respected in that way.”