Victoria all out for 63 in Brisbane, Take a look at hopefuls Marcus Harris and Peter Handscomb out cheaply, video, highlights 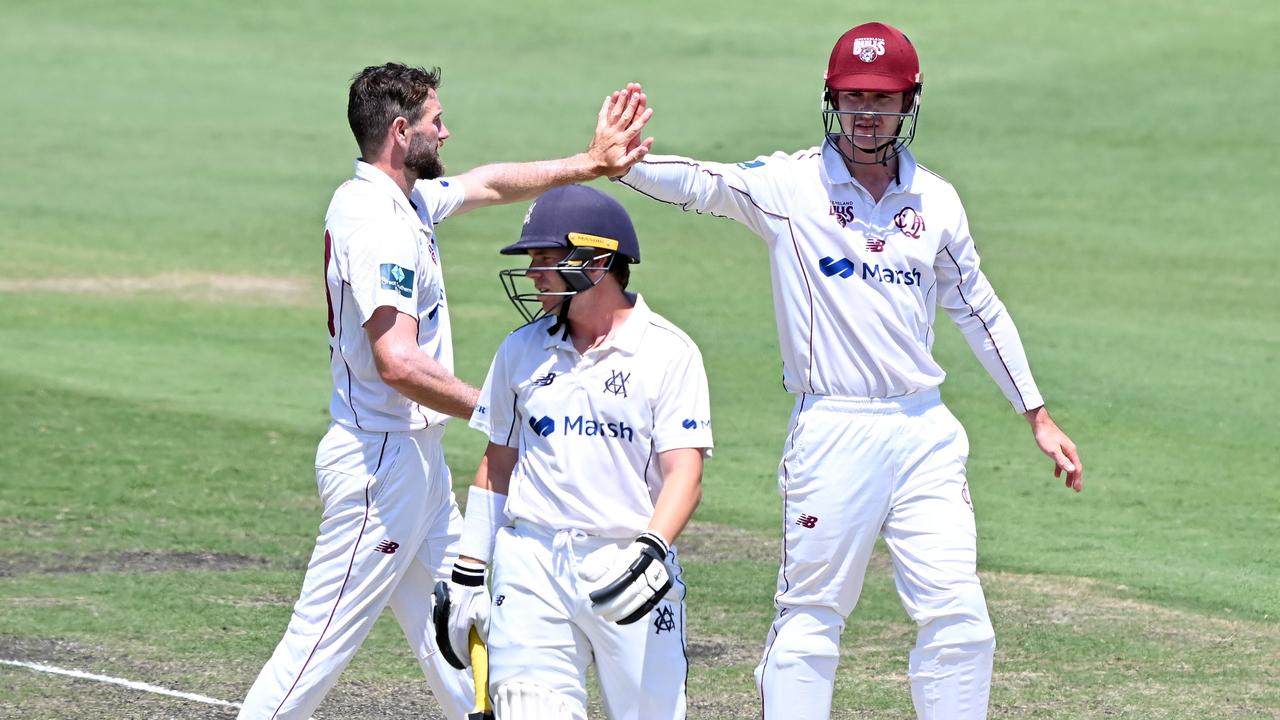 A horror trip to Brisbane for wannabe Test opener Marcus Harris and his Victorian teammates ended with a second horror capitulation and a defeat inside two days at the hands of a rampant Queensland attack.

Less than 24 hours after being dismissed for an embarrassing 63 Victoria’s fourth-lowest total in Shield history, after choosing to bat, the visitors were back at the crease before lunch facing a 142-run deficit, were immediately in trouble again, and never recovered .

Victoria was all out in his second innings for 132 with quick Michael Neser the chief day two destroyer, taking 5-48, and 9-70 for the match to compete as comprehensive a victory as there has been in recent seasons.

Neser started the onslaught early, removing both Victorian openers, including Travis Dean for a second duck of the match, and then Harris for just 1, to put the home team on a quick path to victory he sealed with the final wicket of the game.

“We weren’t expecting this,” Victorian all-rounder Will Sutherland said, after he showed some batting resistance before the loss.

“It was challenging conditions, but we’re pretty disappointed with the way we batted.

“It was too much work to do today with the bat. They were amazing with the ball…they didn’t give you a ball to hit.”

After a day-one duck, Harris was out edging a rising delivery from Neser, who was near unplayable early, to keeper Jimmy Pierson in the opener’s final game before first taking on the West Indies in the Prime Minister’s XI and then hooking up with the test squad.

Victorian captain Peter Handscomb, whose decision it was to bat first on the opening day, was almost out first ball, narrowly missing an unplayable ball from Neser who should be the first man national selectors call if any of the four quicks in the Test squad become unavailable.

Neser, who also made 31 with the bat, his team’s second highest score, also removed Sam Harper and Nic Maddinson as any sort of Victorian hopes to make Queensland bat again solved.

The visitors slumped to 6-62, with all recognized batters out and still 80 runs behind the Bulls who had run rampant with the ball.

A 48-run partnership between Sutherland (48) and young quick Mitch Perry (19) briefly stopped the bleeding before Gurinder Sandhu took two wickets in two balls to continue the bleak outing for the Victorians which ended when Neser removed Cameron McClure.

While the kudos has to go to the Queensland bowlers, who took 20 wickets in just 82 overs, questions now will be asked about the future of some of the Victorian batsman, particularly one-time Test aspirant Nic Maddinson.

Put on the radar by national selectors the 30-year-old has returned just 74 runs in six innings this season, with a high score of 30.

The early finish means the Vics have extra time to soak their wounds before the two teams face off in a one-day clash, i.e. in Brisbane, next Tuesday.

Choosing to bat on a green wicket backfired badly on Test hopeful and Victorian skipper Peter Handscomb as he and his side was humiliated in Brisbane and bowled out for their lowest Sheffield Shield score in more than 50 years.

Victoria lost eight first session wickets before being rolled just after lunch for just 63 as Bulls bowlers Mark Steketee and Michael Neser continued their dominant start to the summer to destroying the visitors at Allan Border Field.

Fresh off being picked in the Prime Minister’s XI as two of the “leading first-class performers” this season, the duo snared seven wickets in the opening session as the visitors crumbled from 2-0 to 8-47 at lunch.

Each bowler then took another scalp after lunch to dismiss Victoria in just over 32 overs, to take their combined wickets to 41 this season, playing just their fourth game.

Neser finished with figures of 4-22 and has 19 for the season while Steketee, who took 6-38 against WA last week, snared 5-18 in the disastrous Victorian effort and has 22.

Only second-gamer Ashley Chandrasinghe, who made a century on debut against Tasmania, defied the onslaught for the Vics, facing 84 balls, but for just 16 runs before he was out and his 19-run stand with Scott Boland was the biggest for the visitors.

The minuscule total was the smallest since the Vics were all out for 73 against WA in 1971, and is the fourth-lowest total in more than 130 years of Shield competition.

But the embarrassing score didn’t make the top 20 for lowest ever competition scores, and was two runs more than the 61 Victoria dismissed Queensland for just five years ago, in 2017.

Given their chance to bat on the same pitch, the Bulls weren’t without their own troubles but passed Victoria’s total just three wickets down, and were 6-130 at stumps, a lead of 67 with Neser again doing the job, making an unbeaten 30

The only concern for the home team, and potentially Australia, was the struggles of Test batter Marnus Labuschagne, who was out for nine to Scott Boland.

It was Labuschagne’s fourth single figure score in a row having started the season with 127 in the opening game.

It was celebrations all-round for Queensland against Victoria at Allan Border Field (Photo by Bradley Kanaris/Getty Images)Source: Getty Images

The day started horribly for the Victorians after Handscomb won the toss and decided to bat. Both Victorian openers, including Marcus Harris who was recalled this week to the Test squad to face the West Indies, fell for ducks.

Travis Dean, last year’s joint player of the year in the Shield, lasted just three balls and Harris seven, but neither scored and the Vics were 2-0 inside four overs.

That became 3-5 when Handscomb was out, then 4-12 when Nic Maddinson’s battles continued and he was removed for just four, then 5-13 when Sam Harper was also out for one.

While Handscomb and Harris are the competition’s top-two run scorers this season, Maddinson has just 56 runs in five innings, and is averaging only 11.

It only got worse for the Vics after his dismissal when Will Sutherland was caught for five and the visitors slumped to 6-22 inside the opening hour of play.

But while Chandrasinghe did his best to keep the Bulls at bay in partnerships with Mitch Perry and then Boland, even he succumbed on a dark day for the team.

The Vics did go past their three lowest ever Shield totals, scored more than a century ago, the only times they have ever failed to reach 50, but the meagre now total sits in their lowest five of all-time.