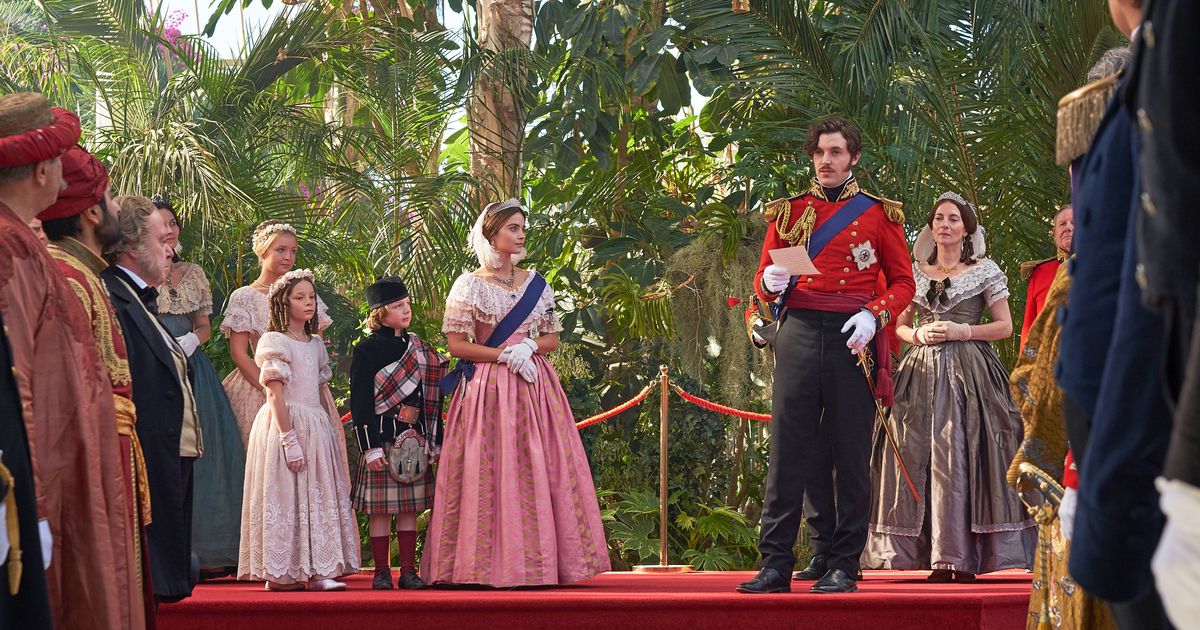 We are at the end of our turbulent season and what do we have to show for that? An unconscious prince, a swaying duchess, and a chastened queen. God save them.

France books the season: we started with Louis-Philippe and ended with Louis Napoleon, aka Napoleon III, self-proclaimed emperor after the people refused to re-elect him. (Are we sticking with the “Emperor” on this?) While support for Louis-Philippe threatened Victoria’s rule, this time it is Palmerston who is in danger.

Oh, Palmerston. Yes, you check out all of the “Heart of Gold Rakes” stereotype boxes, but that doesn’t stop me from enjoying you. His resignation as foreign minister is dampened by the murmuring of his future prime minister. No doubt his crooked grin and naughty manner will adorn Buckingham Palace again next season.

As it turns out, the long-suffering Duchess Sophie is not in an asylum, but in her own apartment. Her wailing husband with his too small mustache holds her there and sends her regret to court. Sophie tells him to REMOVE the Queen, that he let her go, but oops, he told Victoria she was sick and Victoria sent her corrective jelly so there is no help from the Royals at the moment although I think a jar Royal jelly is better than nothing.

Victoria hasn’t had a really big romantic subplot since Albert’s brother Ernest gave up his future with the Duchess of Sutherland because of syphilis. I had hopes for Sophie and Joseph, but other than some decent chemistry, the relationship barely developed. What people really want is for Lord Melbourne to rise from the dead and take Victoria Albert away. These people have a tumblr tag. And it’s Vicbourne. Since Albert spent the entire season striving for King of Douche Mountain, I am not against this scenario.

For everyone who has somehow still invested in the Prince Consort, he is working on his exhibition. Too few people buy tickets and he becomes more and more desperate. “Well!” you could say. “Remain in your dissatisfaction! I hope nobody comes to your lousy exhibition anyway! ”I fully understand. But Victoria disagrees and instead offers to support ticket sales by opening the exhibition.

Albert offers the first of two redeeming moments in this episode by explaining the origin of the term “white elephant”. It’s a fun trivia fact, and I’m grateful to every nerd in the writer’s room who added it. He calls the exhibition a white elephant, Victoria replies “Fiddlesticks,” a word we should use more in this world, and there is a nice moment of holding hands. All right, but I’ve got my eye on you, Albert.

Feodora is walking through the park with her daughter Adelheid (yes, real name) when a preferred Palmerston sneaks up on her and asks if her daughter would like to become Empress of France. England needs an alliance with Louis Napoleon to keep Russia in check. With a manic twinkle in her eyes, Feodora says: “As Empress she would surpass everyone.” Here’s the thing: while this development of the plot is not entirely correct, Louis Napoleon made a proposal to Adelheid. However, Victoria was totally against it, as he seized power after a lost election, and she is not interested in this coup life. So Feodora and her husband said no. There is a lot more machinations here, that’s how it should be.

A stressed out Albert confronts Feodora and asks if she spoke to Palmerston after he publicly supported the new French government and Feodora says oh no, I mean he definitely spoke to me but I hated it, everything, it was worst of all, I’m on your side, Albert, 100 percent. Albert accepts this because he is stupid.

In one of the most satisfying moments for the show since Victoria smashed that bust of phrenology, a calm, cool, collected Victoria tells the Duke that Sophie is not crazy and says, “In my experience, men only call women crazy when they are it does something uncomfortable. “He argues and she replies,” You can leave us. “THAT’S SO LONG. It’s been so long since a” You may leave us “graced this show! Hello Victoria, your light came on hidden under the bushel of your utter lack of conjugal support this season, but here it shines again and puts this prisoner woman to shame!

Sophie is released. Joseph tells her there is a boat to New York. Mr. Penge regrets his evil methods of espionage and brings Monmouth the choice to buy loyalty. We’ll get stuck in the end, whether or not Sophie gets on the romantic boat. (Again, I have no confidence in Joseph’s ability to make his fortune in the California gold mines, so I can’t make up my mind what I want.)

But back to the royals! Victoria’s exhibition opening sells out the first day. It’s a triumph that we know because everyone says it is. From a production tech point of view, it looks like they hung up some red curtains, put some weird items in glass boxes, and voila! The big exhibition!

Victoria says it is the eighth wonder of the world; I’m so proud of you. Albert still doesn’t apologize for being an asshole all season. He tries to pair Adelheid with the younger brother of the Crown Prince of Prussia, which darkens Bertie’s face because he has decided to marry her. He makes a proposal that she kindly refuses because her mother says she will marry Louis Napoleon.

Maybe now is a good time to talk about the sex chair. Bertie will one day be king: he is Edward VII from the famous Edwardian era (these are Room With a View times when British ladies in Italy became sexually free and wore big big hats). With his intense interest in his beautiful cousin Adelheid, the show throws us some premonitions.

Known for his insatiable sexual appetite, Edward VII actually had a chair built for him when he was older that would make his hookups less of a hassle. There is no way not to mention the sex chair when talking about Edward VII. But for now! He is a 10 year old with his father’s limp hair and an adorable kilt for formal wear.

Everyone thinks the exhibition is a complete success and Albert is very happy. Until he hears that Feodora is planning to marry Adelheid to the leader of France. He tells Victoria that she was right and he should have listened to her, but in the words of JoJo’s 2006 hit – it’s too little too late Albert. Feodora comes in and he calls out her lies. She leaves and Victoria follows in what may be a great scene between two strong women, which somehow ends with Victoria asking her not to go and saying that she doesn’t have one thing: a sister. This writing sometimes, dear God.

Albert and Victoria relax in their room and everything seems to be all right again for the royal couple until Albert collapses in front of the fireplace. I’m not going to lie, I look forward to Albert being gone and the show focusing on Victoria’s life beyond him. Even if that life consists of mourning him for the rest of her days.

• Did Sophie get on this boat and if so, she will somehow draw a parallel to “I’m flying!”. Scene from the Titanic, even though it didn’t even happen historically in the next 60 years?

• Will Feodora stay despite her constant intrigues? Will she turn out to be an impostor, because what else would these clues be in the middle of the season? Fraudulent diversions? People demand at least one cheater on this show.

• Will Lady Portman and Lord Alfred be able to do anything other than react quietly in the background of the scenes?

• Will Albert survive and do we care?

Keep up to date with all the drama of your favorite shows!