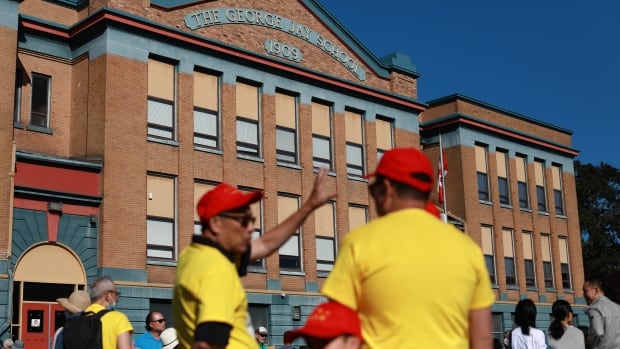 Hundreds in Victoria attended events on Monday to commemorate a century since Chinese students staged a walkout and a school boycott against segregation.

The commemorative walk, speeches and lunch marked 100 years since the start of a student strike against a school district policy separating Chinese and white students that was ultimately reversed a year later.

The events were held three days after the Greater Victoria School District apologized for the discriminatory edict.

“On the first day of school — Sept. 5, 1922 — the Chinese students were called out of their classrooms by their principals,” said Alan Lowe, chair of the Victoria Chinatown Museum Society, in an interview.

“They were marched down to the Chinese segregated school … All of the students essentially dispersed and went home, and that’s when the strike started.”

The walk to commemorate the student strike began at the elementary school that still bears the name of George Jay, the school board chairman in 1922, and ended at the nearby Kings Road Park, which was the planned location for the Chinese-only schools.

“This, to me, is the defining moment,” said Grace Wong Sneddon, a University of Victoria expert in Chinese culture and Asian identities, in an interview with The Canadian Press.

“This moment — this act of defiance and this demonstrated piece of agency — I think, really set the moment and made Chinese-Canadians as a concept and a reality.

“Up to this point, there were Canadians and there were Chinese. They didn’t go together,” added Wong Sneddon, who grew up in Victoria.

A boy holds a George Jay school class photo from 1921 during a ceremony Monday to commemorate 100 years since Chinese students boycotted school after the district enacted a segregation policy. (Chad Hipolito/The Canadian Press)

She said Chinese-Canadians endured racist policies and racial stereotypes, but the community united and drew the line at the proposal to place their children in segregated schools.

“The parents said education is too important to our kids and if we don’t stand up now, future generations will be affected,” she said. “The whole community supported this move.”

Veteran Gordie Quan has just arrived for the Commemorative Walk for the 1922 Chinese Students’ Strike.@ccmuseumbc pic.twitter.com/GfFXzDa1Wv

Lowe, Victoria’s mayor from 1999 to 2008, said the actions by students and benevolent associations a century ago set the stage for decades of opposition to racism in BC

The same year the school boycott ended in victory — in which the district allowed Chinese students to re-integrate — Canada enacted another piece of racist legislation, the Chinese Immigration Act, restricting who was allowed into the country.

“They weren’t even citizens in this country, and they had to be bold and courageous to essentially decide to stand up for themselves, against the school board trustees,” Lowe said.

“We do thank our forefathers for that, because without what they have done for us — the hardships that they endured — we wouldn’t have the life that we have today.”

On Friday, the Greater Victoria School District apologized for the policy.

“Among a long list of historic wrongs perpetuated against the Chinese community in Victoria, this stands out as a particularly dark incident for our school district,” said chair Ryan Painter in a statement. “We will work with the Chinese community to ensure this history is not forgotten.”

The district also presented the Chinese-Canadian community with a plaque that read: “The racist discrimination that led to this act is unacceptable and viewed with regret.”

Lowe applauded the apology, and said the plaque will be placed on display in the Victoria Chinatown Museum.

He said he hopes teachers will share the story of the student boycott with the current generation of students as they return to school Tuesday.

7 eating places in and round Victoria with should attempt waffles