Victoria Metropolis Juniors row to Tokyo – just about, in fact 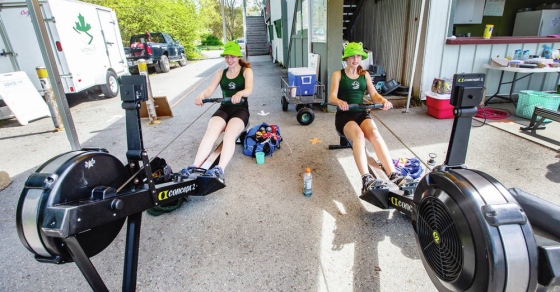 It’s one thing to row in Tokyo, which the Canadian crews at Elk Lake are preparing for the Olympics this summer. Rowing to Tokyo is something completely different from what a group of youngsters from the Victoria City Rowing Club is doing this weekend. They hope to get closer to Honolulu with Guam in their sights.

Victoria City’s six juniors lead 30 crews from across Canada in the Row to Tokyo Challenge, which took place on the 19th. Tokyo was chosen as a virtual travel destination for obvious reasons.

“Our girls’ machines are in front of the boathouse and they stare right out over Elk Lake and watch the Olympic team train on the water while they row stationary themselves,” said Katie Bahain-Steenman, Vic City Director of Junior Rowing.

Even the Olympians must be impressed by the sheer courage of this Vic City Super Six. The Victoria City juniors took first place in the Challenge on Saturday ahead of the University of Calgary’s U23 team, which placed second.

The Vic City crew is a determined bunch and has been since the challenge began. They finish it off this weekend by going through Saturday and Sunday from 6 a.m. to 10 p.m. and only stopping for limited breaks.

“The girls have their stacks of food and drink right next to them,” said Bahain-Steenman.

“They stopped all other training to do this. You are very focused and committed. You have to work 16 hours a day on two weekend days. You want to keep the lead and not be overtaken. “

The Vic City crew with Quinn Parfitt, Eryn Wale, Tegan Zecher, Hui-Lin Shan, Stella Graham and Willow Tzonev had covered a total of 1,804 kilometers on Saturday. The University of Calgary men’s U-23 runners were 1,660 kilometers and the third Ottawa Rowing Club was 1,039 kilometers. Nobody manages the 7,575 kilometers to Tokyo, but the thought and the effort count.

Bahain-Steenman commended their athletes for the work they did during the pandemic. BC’s health restrictions limit training to single boats with an exclusion for Olympic crew rowers who are allowed to train in larger crewed boats in preparation for the Summer Games on Elk Lake.

For the clubs involved, in the absence of actual regattas, the Row to Tokyo Challenge offered a kind of much-needed competition last year. And a crew of relentless Icelandic junior rowers won’t give up until they get as close to Japan as possible, even if it’s only virtual.