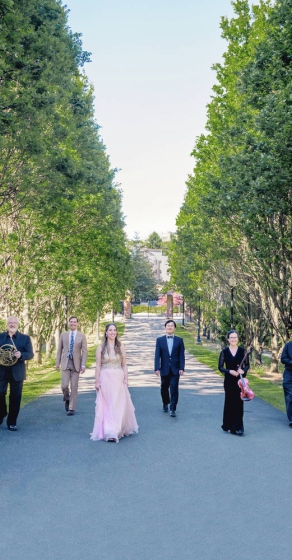 A joint venture between the Victoria Symphony and Pacific Opera Victoria spanning the next two weekends will bring the music back to the grounds of St. Ann’s Academy in downtown Victoria – a significant post-pandemic development if it does is about local live music.

Open Air: A Summer Festival of Music is the latest offering resulting from the 41-year relationship between the two companies, who work closely each year on Pacific Opera performances but have never hosted an event of this magnitude. As one of the first major events after the province restart, the festival – especially one that employs musicians and staff from two of Victoria’s largest performing arts organizations – is expected to make a splash when it opens today.

“This is good news no matter how you take it apart,” said Timothy Vernon, artistic director of Pacific Opera Victoria. “It doesn’t look like much in a way, but it’s incredible.”

The 10-day outdoor event offers up to 12 performances on two stages between now and Monday; The event will repeat its program from resuming July 29th to closing on August 2nd. 30 performances each week, from chamber music to opera, are programmed to cater for all tastes, said Matthew White, Victoria Symphony CEO.

“We all got a taste of being in front of a live audience again,” said White. “It was just a great opportunity.”

For the individual performances with a duration of approx. 45 minutes, tickets are required, which are available on site and in advance. Performances take place at several locations on the grounds of St. Ann’s Academy, either in The Butler’s Garden (with a spatial distance for up to 60 people) or in the Victoria Foundation Courtyard (85 people). Performers include musicians from the Victoria Symphony and soloists from the Pacific Opera.

Short, unscheduled pop-up performances under the motto Music in the Meadows with everyone from indigenous artists to young musicians will take place at various locations on the premises for free.

The event was originally intended for the grounds of Government House, but due to ongoing construction on Rockland Avenue, the open air has been relocated to St. Ann’s, which has hosted several food and drink festivals as well as pop and rock festivals in previous years . It’s an ideal location for a first year festival, Vernon said. “The opera house hasn’t had any summer activities for a long time and we were looking for a way to start something together without displacing anyone. We just want to give artists more options, which of course also means more options for the audience. “

It is important to find an event that both the opera and symphony will benefit from a year of inactivity due to the pandemic, Vernon added. “We are committed to the orchestra, but we also feel obliged to it, because we usually hire it for three productions a year. This fall the orchestra will have a huge gap in its budget and we are working very hard to find ways to make up for it. We need them. We need the partnership. “

White believes the inaugural open air is the first of many parts.

“We take one step at a time. The hope is that this could possibly be a longer term thing, but we also have to see what the reaction is. We see this as a kind of canary in a coal mine. We had to do something because it just feels so strange to work for and with such art organizations and to be cut off from the audience for so long. It just feels totally unnatural and strange. We were ready to take the risk. “