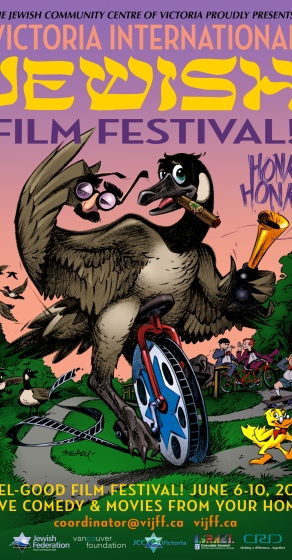 The 7th annual Victoria International Jewish Film Festival (VIJFF) begins its program in 2021 with a Feel Good Film Festival, which will take place June 6-10 and will be available through the VIJFF’s virtual cinema. In addition to two full-length comedies and a heartwarming documentary, the Feel-Good Film Festival will also be presenting specially curated stand-up comedy live on the opening night, a shared experience of the cathartic benefits of comedy and the connections between cultures and communities. ”Said Deborah Bricks, VIJFF co-director. “The addition of a more extensive main festival in the fall, which will present seven short stories and documentaries, with a feel-good film festival was now a matter of course – especially for the shared experience of going beyond the screen and the live interactions of the stand wrap-up comedy, special snack boxes (nosh boxes) from Spinnakers, and a supportive local initiative promoting shopping in popular local stores. ”

The festival opens on June 6th at 7.30pm with a live streaming comedy hosted by Ophira Eisenberg of National Public Radio (NPR). Ophira is a Canadian-born comic book character who lives in Brooklyn who hosts the NPR show Ask Me Another, which regularly engages and interviews celebrity guests. The comedy night will also feature: The El-Salomons, a Jewish-Palestinian lesbian comedy couple whose comedy picks up on several contemporary themes; Jon Fisch, a New York City-based comedian who has appeared on both the Late Show with David Letterman and the Late Show with Stephen Colbert; and Shawn Pelofsky, whose comedy is often about being one of only ten Jews in their Oklahoma hometown.

The films can be streamed from 8:30 p.m. on June 6th to 8:30 p.m. on June 10th. These include: Kiss Me Kosher, an energetic German-Israeli romantic comedy that touches on current issues in Israeli society and leaves us with a lot of thought and laughter; Mish Mish, an insightful documentary about family secrets in the untold story of the Frenkel Brothers, pioneers of extraordinary Egyptian animation that recalls the early works of Walt Disney; and A Matter of Size, a warm Israeli romantic comedy that explores body image. Tickets are available for a donation. For information, visit vijff.ca.

Guided by the idea of ​​tikkun olam (Hebrew for “repairing the world”), the VIJFF is a multicultural, non-religious program of the Jewish Community Center of Victoria (JCCV) that promotes capacities and connections between communities through cinema about Jewish and neighboring Jewish Topics and their overlap.