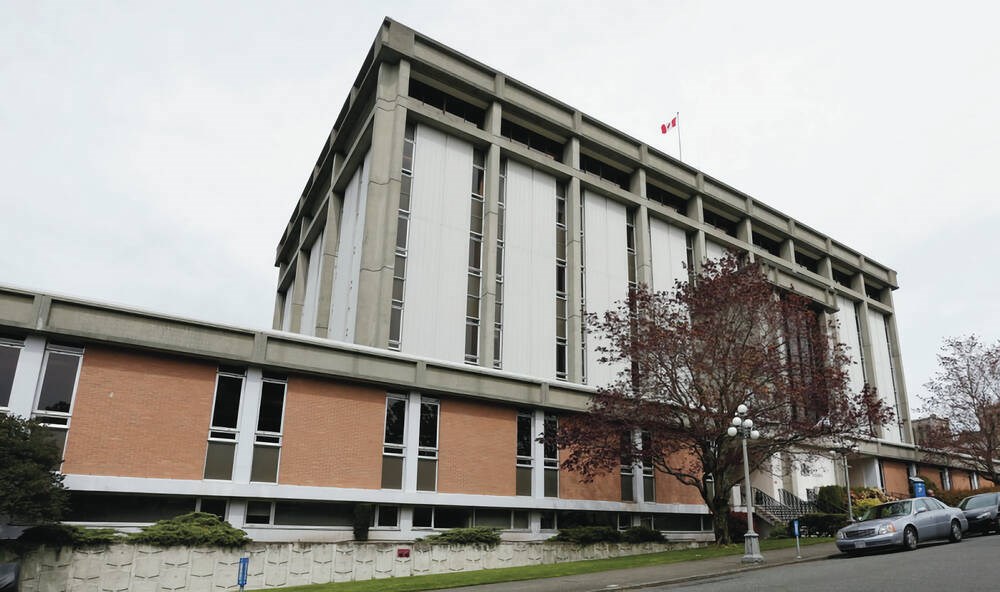 Violence broke out in a Victoria courtroom Monday when a man who attacked a Victoria police officer two years ago and left her with a traumatic brain injury was sentenced to 15 months in prison.

The conviction was scheduled for Monday, and sheriffs had cleared the hall and stood by. Only Crown and Defense lawyers, the defendant and his parents, and Victoria Police Chief Del Manak were allowed to enter the courtroom.

The sheriffs who had been waiting in the hall stormed in and the judge left quickly.

Chaignon, raging, screaming, kicking and rowing, was brought down when sheriffs tried to calm him down.

“Stop resisting. We are here to help, ”said one officer.

Minutes passed. Chaignon’s father tearfully walked out of the courtroom during the fight.

Eventually Chaignon was put on his feet and taken from the courtroom to another room in the courthouse, where his sentencing – 15 months in prison followed by a year on probation – was completed by telephone. The phone had to be muted to silence his screams.

“There are no winners here,” said Victoria Police Chief Del Manak, shaking his head as he left the courtroom. “But it was important for me to be here today. I had to be here for Const. Lequesne. I owed it to show her and all other officers that attacks on our officers are unacceptable. “

The charges stemmed from an altercation on October 27, 2019, when workers at a supportive housing unit asked Victoria Police to look after Chaignon, who was yelling in his apartment and threatening to kill the police.

Five officers responded to the call and, after speaking with staff, decided to arrest Chaignon under the Mental Health Act. They spoke to Chaignon through the door and when he seemed to calm down they told him to lie face down on the floor. When they opened the door he was lying on the floor.

Lequesne handcuffed him, putting her knees on his back. Chaignon was still when he was handcuffed. When Lequesne tried to get up, however, Chaignon rolled over on his side, drew his knee to his chest, kicked his leg, and hit the officer in the face with his foot.

She has been seriously injured and has lost the ability to see things up close, which means she cannot read bedtime stories to her children or use a computer or drive a car at night. She was diagnosed with post-traumatic stress disorder and major depressive disorder.

Manak said Monday’s events in the courtroom showed that “our mental health system has failed us.”

“The extreme aggression and violence of hearing the judge’s verdict really shows how broken the mental health system is,” said the police chief.

Chaignon has a history of violence against the police. Forensic psychiatric exams found he was at high risk of violence and has a range of mental illnesses, Manak said.

“Why does a person like this who needs intensive psychological support live in a supportive apartment?” Asked the boss. “I have a civil servant who has lost her identity, her career, her livelihood and who has suffered a traumatic brain injury. And we have a person here who needs eight sheriffs to safely control him and take him into custody. It really shows how changes are needed in our mental health system. And that’s the tip of the iceberg of what our officers see on the street. “

Manak said the prison is not the place for people like Chaignon with severe mental illness who need intensive psychological support, and the involuntary care of those unable to function in society should be seriously considered.

“Why do we have to wait for someone to commit a crime that ruins a cop’s life before realizing that the system is failing that person?” Asked Manak. “How many people and how many families are being destroyed on both sides?”

Manak said he was extremely grateful to the sheriffs for using their team tactics and de-escalation techniques to get Chaignon to work together. “I think you did a great job. This was a controlled setting, but it just shows how quickly things can escalate. “

Peachland man on the best way to Victoria continues to be lacking after the freeway. 99 Landslide – Sooke Information Mirror