A recent CMHC report said BC needs nearly a million new homes. We break that down at the local scale

The Canada Mortgage and Housing Corporation (CMHC) released a bombshell report last week on the extent of housing shortages in Canada. According to the report, the country needs to nearly double the rate of construction to stop prices from escalating and get affordability back within acceptable ranges.

The report predicted that provinces with the highest housing prices will need to add the most homes to bring prices back in line with incomes. They argue that new homes—while not cheap—will reduce price pressures by allowing higher income Canadians to move up and free up existing homes in a process known as filtering. In addition increased public housing investment will be needed to make more new and existing homes affordable to those with lesser means.

With BC in the unenviable position of having the worst housing affordability in Canada, they estimate that our province would need to add more than 570,000 homes to restore affordability—on top of the 376,000 homes that they expect would normally be built without a change in policies if construction continued at the historical pace. All told, that’s just shy of a million new homes needed from now until 2030.

CMHC didn’t produce estimates more granular than province-by-province; however, three years ago BC mandated that each municipality produce a Housing Needs Report to estimate specific local housing needs in greater detail. Though the method behind those estimates is entirely different than the one used by CMHC, we’ve combed through each municipality’s report and listed the identified needs for new housing in the table below. 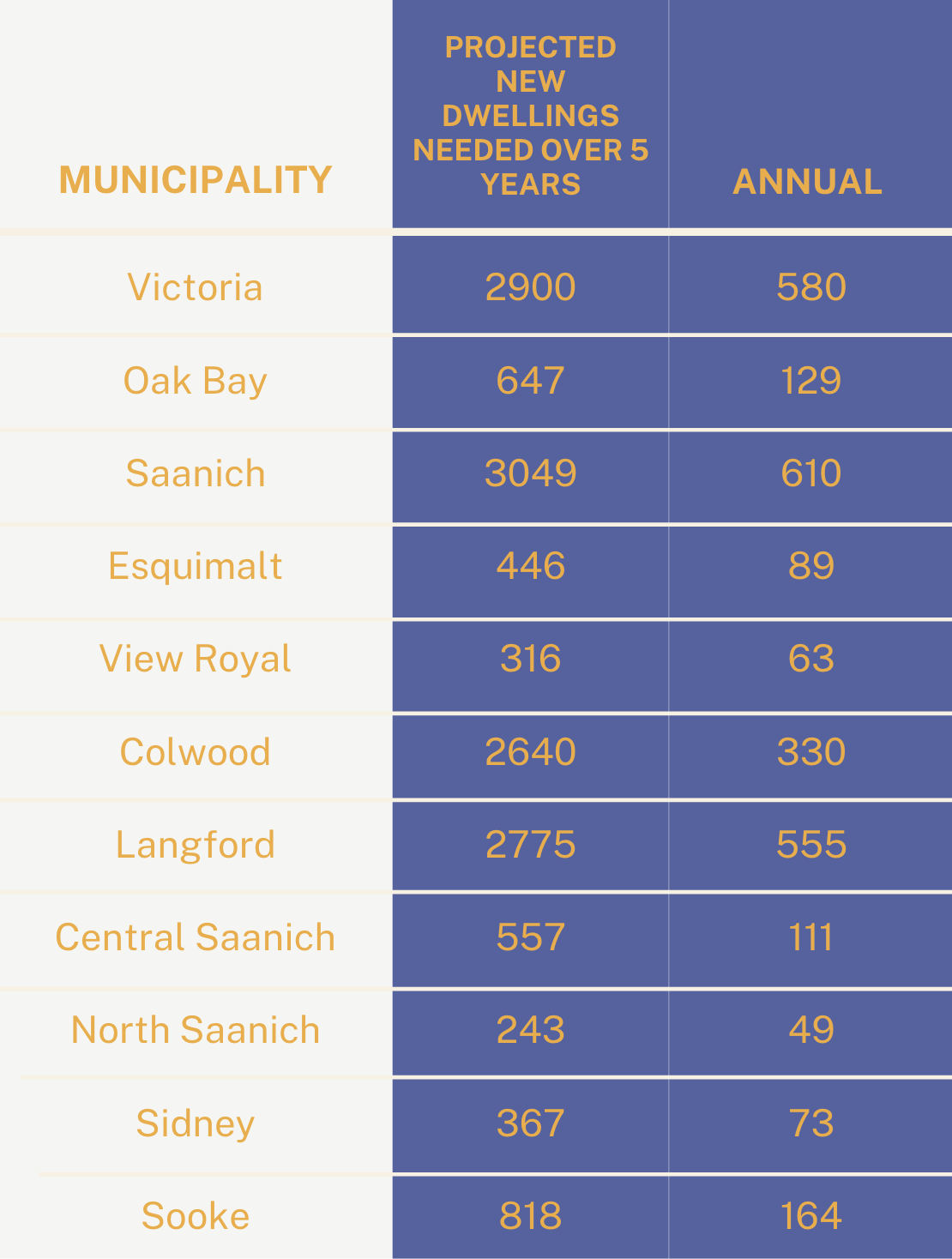 How well are Greater Victoria municipalities doing at meeting their own identified housing needs? We compared the average rate of housing completions in each municipality to their own estimates, with the results in the chart below.

In general, recent high construction rates have allowed most municipalities to easily exceed their own targets, with the notable exception of Oak Bay, Central Saanich, and Saanich, which have lagged substantially behind targets.

The reality, however, is more complicated: municipalities estimated housing needs based on past growth trends, a method which received criticism in the final report from BC’s Exert Panel on Housing Supply and Affordability as being an underestimate of true needs. The panel observed that relying on past demographic trends to anticipate housing needs “runs the risk of ‘baking in’ pre-existing housing scarcity” and continuing the status quo of rising rents and prices. No surprise, then, that prices and rents have continued to escalate despite most local municipalities managing to meet their modest targets.

The City of Victoria recently came to a similar conclusion, estimating in a report that the city has an immediate deficit of 4,500 to 6,300 homes—far above the targets identified in their housing needs assessment. Though similar estimates for other municipalities are not available, by scaling CMHC’s provincial target to local populations, the chart below puts current housing construction rates into context with estimated needs to restore affordability. While growth rates are still highly unequal, overall the region would need to roughly double housing production to match those targets.

It’s hard to imagine that we can double housing completions when there are already cranes all over the city. In fact, construction companies cannot find enough workers to increase construction much above current levels. Though capacity can be expanded over time with more trades training or innovations in building techniques, it’s quite likely that we won’t be able to greatly exceed the building rate we have now.

However, construction is a boom and bust industry. In the last 20 years we’ve seen as many as 4,044 units completed per year in Greater Victoria, and in slow times, just under 1,300 units. On average Victoria completed 2,195 per year, just over half the current pace. In other words, if construction rates could be maintained at the current pace, completion rates for homes in the next 20 years could be nearly twice as high as what has been built in the past. 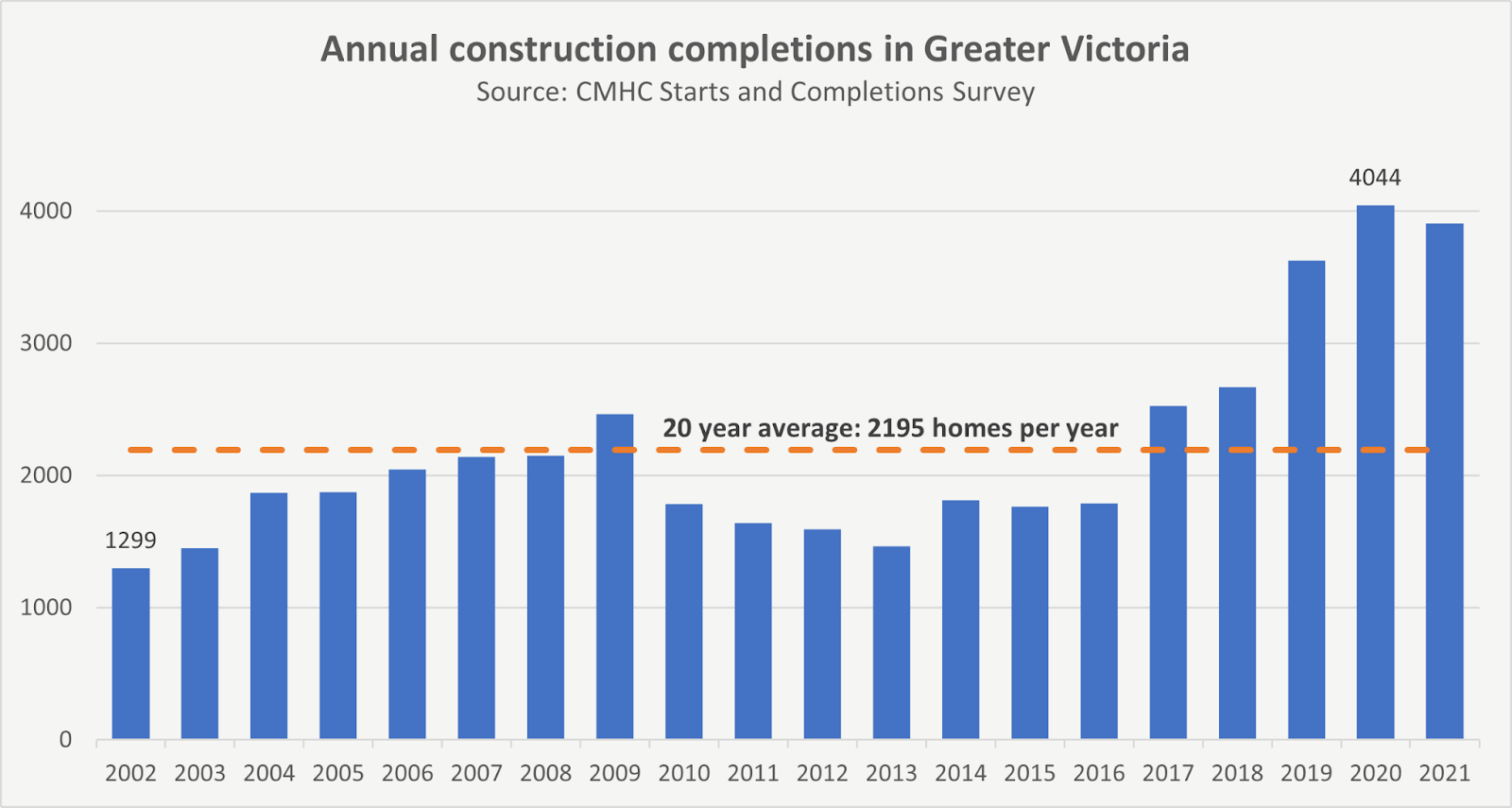 That’s easier said than done, with the CEO of Pacifica Housing recently tweeting that rising rates and inflation in construction costs were already threatening the viability of rental and affordable housing in the region.

The scale of the challenge is not lost on CMHC. “[T]these are big numbers, but the task of restoring affordability is also huge,” the report reads. They conclude that addressing the problem will require substantial changes to how housing is built in Canada, and will require all hands on deck from government and the private sector. Locally there are signs this is starting to happen with the City of Victoria and Saanich moving to streamline approvals for affordable housing while contemplating reforms to make space for infill in single family zones. Meanwhile the province’s housing minister alternates between offering carrots and threatening sticks for municipalities that don’t hit their housing targets.

Although rising rates have stabilized or even somewhat reduced local house prices, it’s clear that the housing crisis is far from solved and housing policy will continue to be a hot topic in the election year.

To find the housing needs report from your local municipality, we’ve got them all in one place:

Correction on July 3 at 5:30pm: This story has been updated with the correct number of housing completions in Victoria.

Have I Bought Information for You’s Ian Hislop on time other than spouse Victoria ‘Lives in Greece!’ | Movie star Information | Showbiz & TV