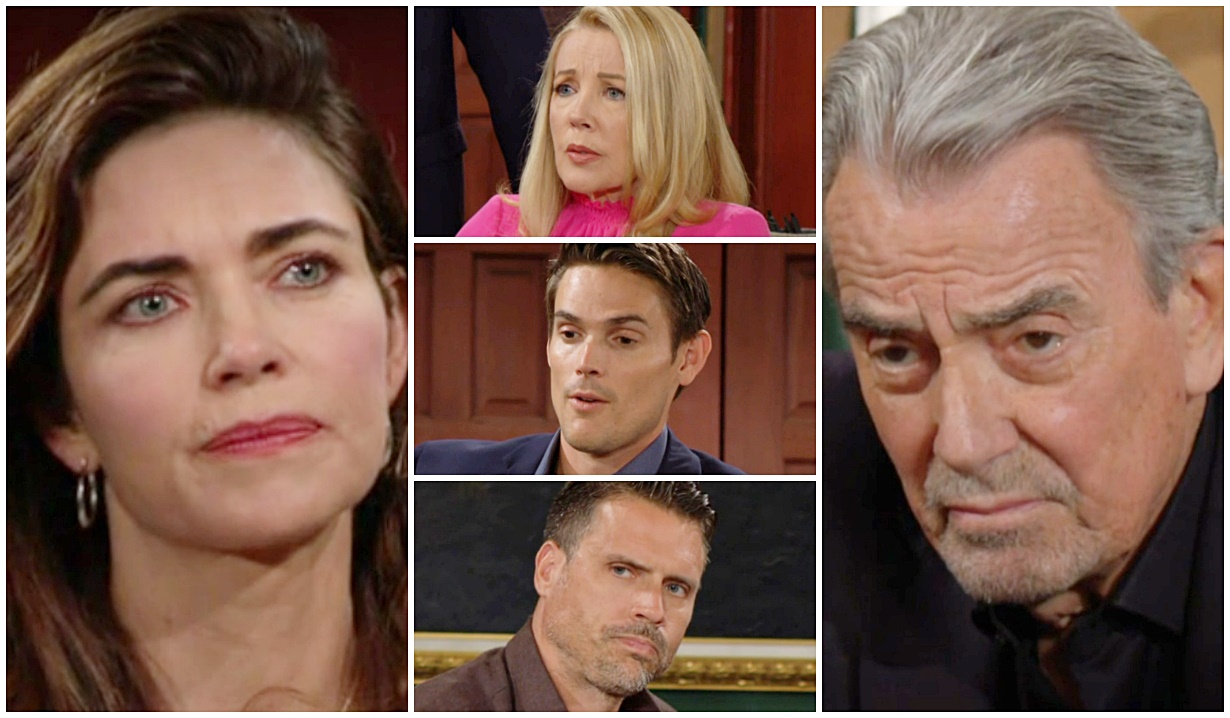 At Crimson Lights, Nikki greets Nick and talk turns to Victoria. She warns his sister is still conflicted about Ashland. Nick wonders how to convince her that Locke is toxic and she’s better off without him. Nikki observes that she’s tired of listening to their advice. They recap her romantic history with JT, Billy and then Ashland. Nikki feels her daughter acts tough but she’s lead by her emotions like the rest of them. She points out how many times Nick forgave Phyllis and Sharon, and she forgave Victor. Nick learns that Victoria asked for space and his mother hasn’t heard from her since last night.

Victoria awakens in Ashland’s hotel room and wonders if he’s worried she’ll regret taking him back. It crosses his mind. She’s happy to be there with him and appreciates him agreeing to take things slowly. “I still love you.” Ashland wants this moment to last forever. Victoria sighs. Her family will continue to judge her and feel compelled to control her. “Unless I take a stand and let them know in no uncertain terms that it ends now.” Ashland asks what exactly she’s saying. Victoria places her hand on his. “I choose you.” Hey smiles.

At Newman Media, Victor complains to Adam that Ashland hasn’t left town. Adam asks if he has any sense of how Victoria’s heart is leaning. Victor just wants to focus on running that bastard out of Genoa City. Adam thinks it will be difficult now that Victoria’s back.

At the hotel, Victoria tells Ashland that her family won’t accept her decision and will try to manipulate the situation. She’s sick of them trying to control her. She ignores a call from Nikki and complains about Victor’s inexcusable move to keep him from his son. A text comes in from her father, but she ignores it too. She doesn’t want to hear it anymore. Victoria wants to start over, away from Newman, away from all these people. She doesn’t want to just imagine it this time. “I want to do it.” Ashland realizes she really means it and says, “We have a lot to discuss.” She smiles, “Yes, we do.” 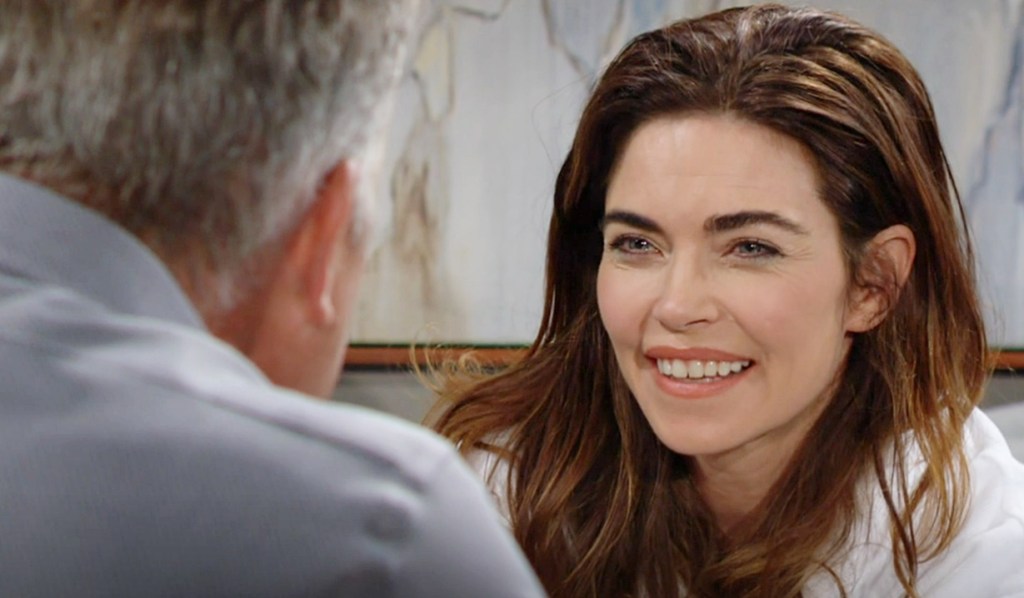 Victoria tells Ashland she believes he fell in love with her, and she loves him. He marvels at her not only accepting him but wanting to run away with him. Victoria means it this time. Ashland wants her to consider all the consequences. Victoria knows it won’t be easy walking away from the company she loves, but it’s worth it. Ashland’s worried that Billy will keep her away from her children. Victoria is sure they’ll come up with an arrangement. Ashland suggests when she declares her independence from her family, she leave his name out of it. Any mention of him may trigger a reaction she’s not prepared for.

At the Abbott mansion, Summer tells Kyle and Jack that Phyllis got a call from Daniel last night and flew off at the crack of dawn. Things were really escalating between her and Diane, so she stepped in. Jack and Kyle appreciate it; she made the right move. Just then, Diane shows up at the door and wants to treat everyone to breakfast. Kyle relays that Harrison is still asleep. Jack cops to get him wounded up last night. Jack begs off breakfast, but Summer agrees to come. Kyle and Diane head out and Summer hangs back to see if Jack’s okay. She knows he and her mother had a fight. He assures her he’s fine and everything will work out as it’s supposed to. 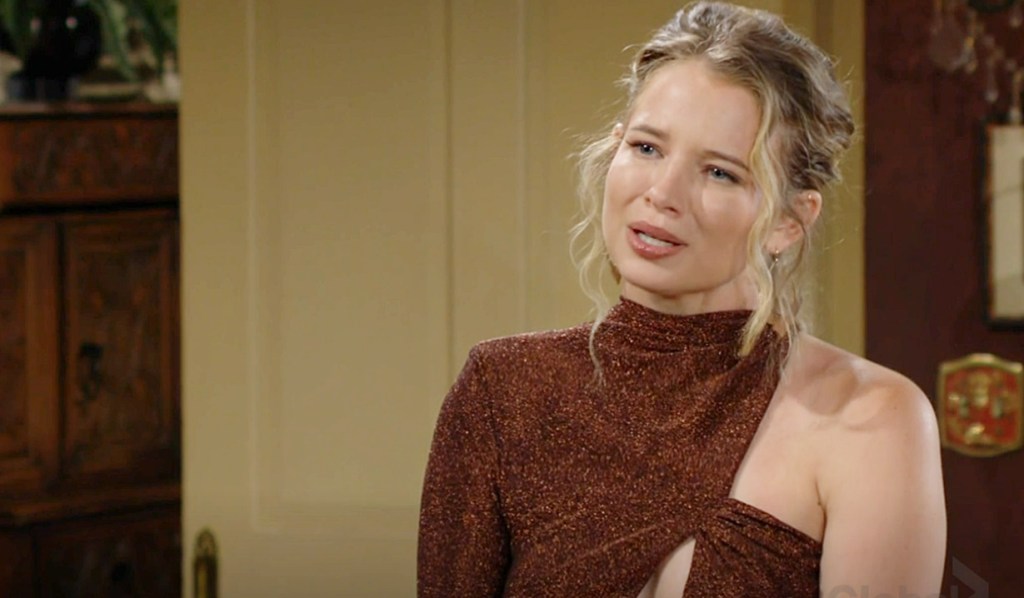 At Society, Diane learns from Summer that Phyllis is gone to visit Daniel. She guesses she’s a doting grandmother to Lucy and vows to spoil Harrison. Kyle and Summer share their news about Jabot buying Marchetti so they can move back to town. Her fingers are crossed they’ll get approval. She enthuses about being part of her son’s life. It’s more than she’s ever dreamed of. She asks Summer to tell her all about Marchetti. Summer fills her in on the need for financial restructuring, which presented them with an opportunity. Diane is sure the board will see the idea for what it is — genius. She’s sorry for all she’s missed out on, but wants to be there for Kyle and his family now. Just then, Ashland walks in.

Ashland tells Kyle he’s aware that he’s not the one who was behind the restraining order keeping him from Harrison. Kyle has nothing to say to him. Ashland tells him how hurtful it is, though it’s right up Victor’s alley. He’s just appalled that he would go along with it and do this to Harrison. Kyle argues it’s his behavior that’s horrendous. Ashland is leaving town and would like to see Harrison before he goes. Kyle refuses. Ashland thinks he’s putting his desire to punish him ahead of what’s best for the boy. Kyle fumes — he will always put his son’s well-being first. He insists this has nothing to do with Victor’s agenda but the need to protect Harrison from his toxicity. Summer takes Kyle out of the restaurant. Diane tells Ashland she’s sorry he’s going through this. She’s sure there are plenty of people who would love to slap her with a restraining order. Diane’s just glad Kyle’s an independent thinker. Ashland notes there’s real power in taking that stance and can come as a real shock to others used to getting their way. 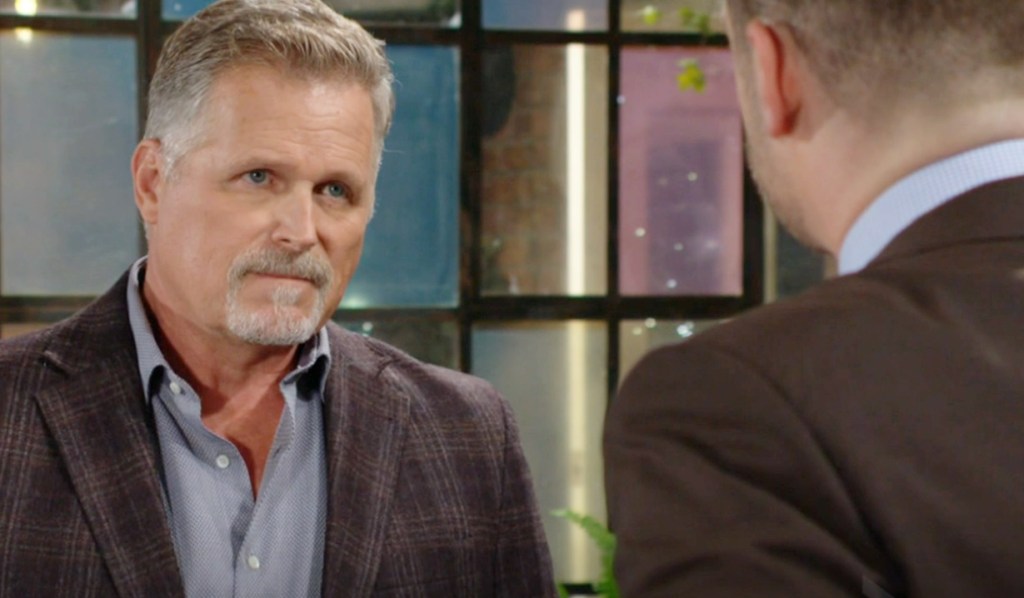 At Newman Media, Adam tells Victor that he thinks Victoria wants Ashland to stick around. Victor chuckles — that fits his narrative, doesn’t it? Adam counters that his ambitions are beside the point — Victor is refusing to see that his daughter is still in love with Locke. “So, what do we do now?” Victor argues that Victoria is too smart and too strong to fall for that man’s bull again. Just then, he gets a message from Victoria asking to meet at the office and bring Adam along.

More: Eric Braeden gets his dukes up

In Crimson Lights, Nikki and Nick get the same text from Victoria. Nikki has a bad feeling about it.

At Newman Enterprises, the family gathers and Victoria announces she’s been doing a lot of thinking. Adam’s honored to have been included. Victoria says it’s something the entire family needs to hear. She thanks them all for coming — she knows they all have busy lives — busy running around behind her back pulling strings to make things happen that she would never approve of. Orchestrating events so that the world spins exactly the way they want it to. “Right, dad?” He wanted Ashland gone and wanted to eliminate any reason he had to stick around. She’s sure Michael was salivating when he told him the plan. He probably had the judge on speed dial to push the restraining order through. “You cut Ashland off from his son. This time you’ve just gone too far!” 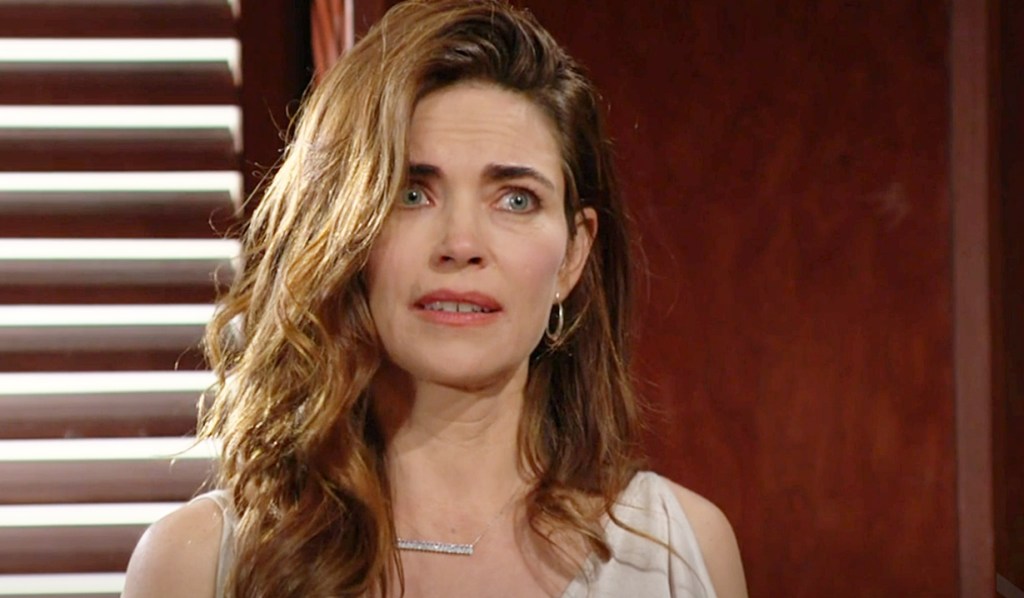 At the Abbott mansion, Jack welcomes Allie back from her run, and he recalls his own running days with fondness, though he can’t do it anymore due to his knees. Allie remembers that her father had to stop running with her for the same reason. Jack apologizes for his genetics. Allie relays that Ashley is showing her the lab at Jabot later. Jack tells her the story of Keemo getting hired there because he loved it so much. Allie tells Jack about the episode of the Grinning Soul podcast that debated approaches to career. He learns that Noah is on the other side of the argument from her. Allie has to go meet Ashley at the coffee house. Jack teases if she goes there, she’s likely to run into… the best coffee in town.

More: The stage is set for a Jack shake-up

Later, at the Abbott mansion, Jack, Kyle and Summer crow about how well the presentation for the board of directors at Jabot went. Summer muses if she could just find a way to get her mother and Diane to peacefully co-exist, everything would be perfect. Jack grimaces and admits he doesn’t think it will happen. Summer wishes she knew exactly what went on between them. Jack feels it’s not important and suggests they count their blessings — they’re moving back to town and his heart is full. 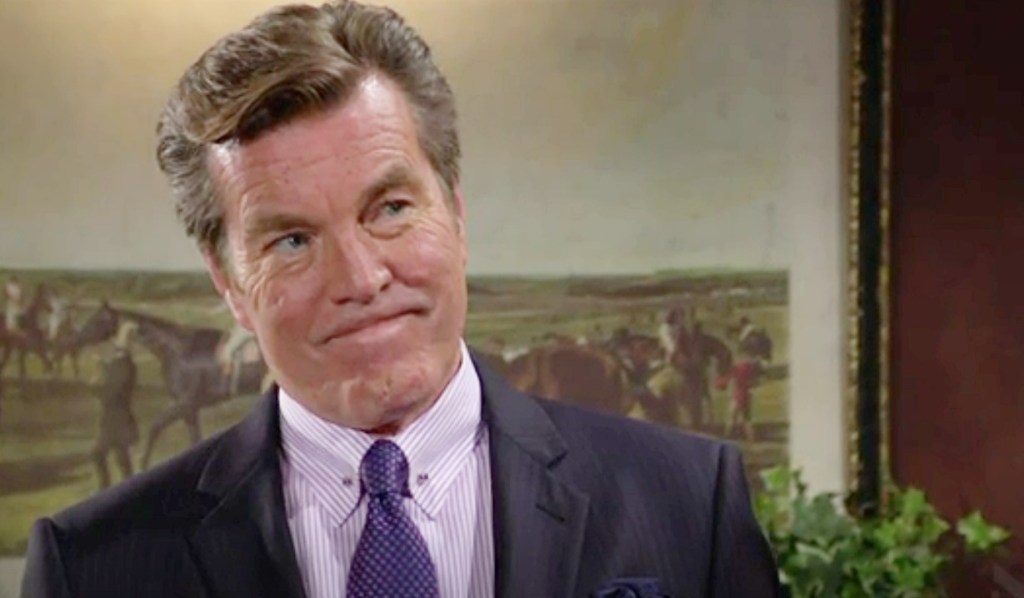 At Society, Ashland has sat down with Diane and admits he feels helpless to fight back against this situation with Harrison. Diane declares it’s unfair what Victor has done to him. Ashland is heartbroken at being shut out of the boy’s life after all these years. Diane wishes she could help him, but she’s just starting to rebuild her relationship with her own son. She’d like to remain friends. Ashland informs her that won’t be possible. “I’m leaving town very soon.” He thinks they’re kindred spirits. She wishes him luck on his next adventure. Ashland thinks leaving is the best decision he’s ever made.

At Newman Enterprises, Victoria recalls that she begged her family to leave Ashland alone. “He had moved on.” Nick argues the point. Victoria Fumes, “He loves that little boy. And dad knows it.” She feels Victor wanted to hurt him in the harshest and most painful way possible. Victor doesn’t regret a thing and barks, “He’s finally reaped what he’s sown.” He hollers that Harrison is better off without that bastard in his life. Adam asks, “Why do you even care, Victoria?” Nikki pipes up that the little boy needs to be protected. Victoria retorts, “You mean me. I need protection.” She’s sick and tired of them trying to control her. “This ends now. I’m done. I’m leaving.” Nikki asks what she means by that. Victoria declares, “I’m leaving the company. I’m leaving this town. I’m going someplace where I can start over.” Adam’s eyebrows go up and Victor fumes. “You’re not going anywhere!” hey booms.

Victoria informs her father she’s not going to fall in line. “From now on I’m going to live my life as I see fit.” Nikki wants to talk about this. Victoria laughs. By “talk” she means “listen.” Nick snarls about her choosing a man who lied to her and used her; who would have bled the company dry. Nikki and Victor want to know if she’s leaving with Ashland. Victor demands to know if he’s coercing her in anyway. Adam smirks. Victor glowers from behind the desk as Victoria informs them that they wouldn’t understand — and for the first time in her life she doesn’t care if they understand. “I’m proclaiming my independence and reclaiming my life. That’s why I’m leaving.” 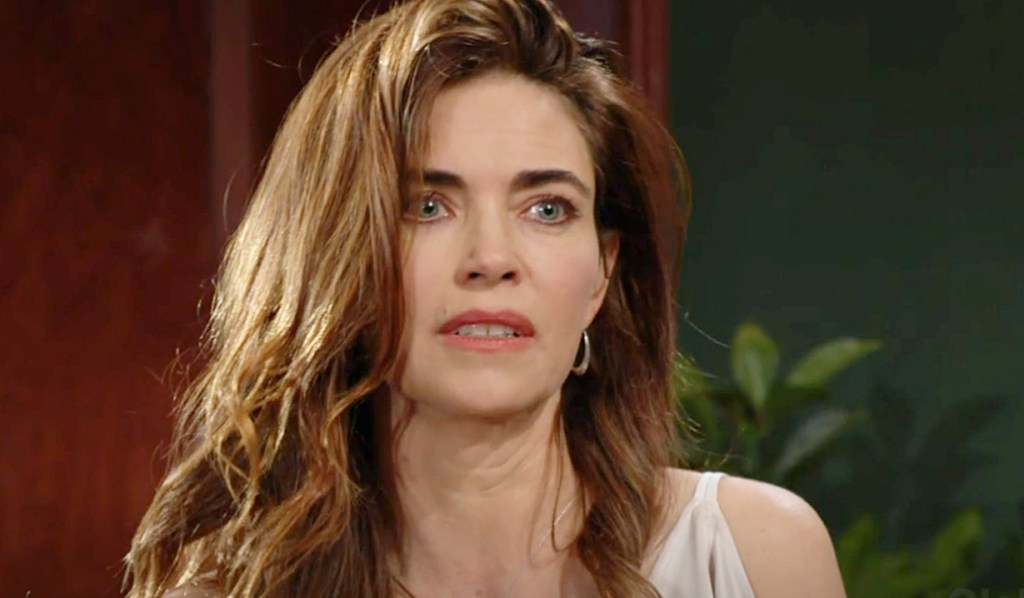 More: Are Adam and Sally about to be blindsided?!?!

Next on The Young and the Restless: Victoria asserts her independence, Nick confides in Sharon, and Victor vows to protect his family at all costs.

Look back on More: Sally and Adam’s love story in photos in the gallery below.

Please note that if you purchase something by clicking on a link within this story, we may receive a small commission of the sale.